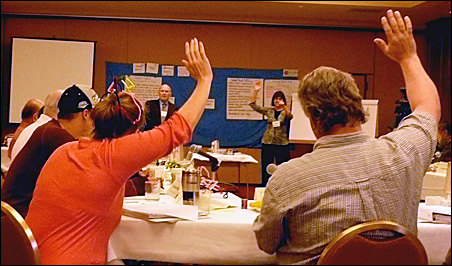 MinnPost photo by Jay Weiner
Members of the Citizens Jury take an interim vote during discussions.

Now that Sen. Al Franken has been sworn in and Minnesota’s long electoral nightmare is over, it’s time to thoughtfully and deliberately examine the state’s recount procedure.

Twenty-four Minnesotans — scientifically selected Joes and Janes – have been quietly doing just that for the past month, with results scheduled for a national unveiling on July 18.

They are called the “Citizens Jury on Election Recounts,” a privately funded, Minnesota-born effort to engage citizens in critical policy-making recommendations. While their forthcoming findings and recommendations may not be earthshaking, they’ll be coming from a different point of view than legislators and policy wonks.

“I think there needs to be many different examinations of the lessons learned from the recount,” said Minnesota Secretary of State Mark Ritchie, who, along with Rep. Laura Brod, R-New Prague, has endorsed the citizen jury concept for this hyperlocal and hypertopical issue. “Citizens are the ones participating in the elections, and they have felt the effects of not having a senator for many months. They have an important stake in describing what they’ve learned and making suggestions for improvements.”

During the course of two long weekends so far, in chandeliered meeting rooms of the Hilton Minneapolis, these 24 Minnesotans from around the state have gathered. They were selected from an original sample of 7,500 Minnesotans.

Some dressed in jeans, T-shirts and backward baseball caps, they’ve heard from experts. Some munching on scones and sipping coffee, they’ve examined data.

Surrounded by large tablet-like sheets of paper with lists neatly printed in Magic Marker, they’ve been bombarded with the value of civil discourse and a kindly but frank process.

From Becker, Detroit Lakes, St. Paul, Willmar and points in between, they’ve climbed a steep learning curve together. In all, each member will complete nine days of work over three weekends and be paid $1,300.

Their charge is to examine the election process and how to handle the matter of absentee ballots and recounts. In the pressure cooker of large sessions and small group gatherings, these regular folks are developing solutions and recommendations for elected officials, in Minnesota and nationwide.

(For the record, I had a small part in the proceedings. Because I covered the recount for MinnPost, I was asked to make a brief presentation to the Citizens Jury and answer some questions from jurors during the panel’s first weekend in June.) 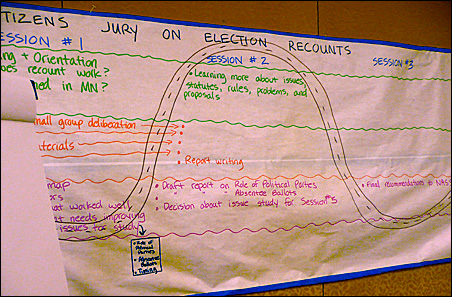 MinnPost photo by Jay Weiner
A flow chart maps the jury’s progress and next steps in delibertions.

Citizens jury concept
The recounts jury is in the draft stage now, and it seems as if its members are headed toward recommending that the state’s absentee voting materials be easier to understand and fill out.

Other topics up for discussion:

• Whether election certificates should be awarded provisionally so a recount winner could be seated sooner rather than later.

• A new way to comprehensively evaluate election practices even before recounts begin.

• The role of political parties in the recount process.

• The timing of primary elections.

Issues such as “early voting” and signature mismatches on absentee ballots have been kicked around, too.

The nation’s chief election officials — members of the National Association of Secretaries of State, or NASS — will be the first audience of the jury’s verdict. The final jury session and announced recommendations will come when NASS meets in the very same Hilton next week.

But as much as the details of their recommendations, it is the citizens jury concept itself — born 35 years ago in Minnesota — that seems to be regaining some national traction.

Among those partnering with the Citizens Jury on Election Recounts is the Council on State Governments, the national non-partisan organization of elected and appointed state officials.

Locally, the driver of much of this is former Minnesota Senate Majority Leader John Hottinger, who once chaired a CSG committee on early childhood education and has strong ties to the organization. Hottinger, now a consultant on civic engagement matters, works regularly for Promoting Healthy Democracy, a nonprofit that works on citizen-focused projects.

As a way to provide useful information to policy makers, citizens juries have been around since the mid-1970s, the brainchild of Minnesotan Ned Crosby. As a doctoral student at the University of Minnesota, he conceived and designed the American version of the citizens jury notion: “Well-crafted public policy should reflect the well-crafted will of the people.” 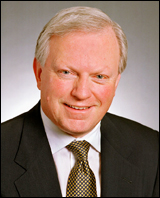 The Seventies, Crosby said, were a period when legislators, “Republican and Democrat, were actually serious about good public policy.”

Now, politicians examine polls, he said, which aren’t reliable. Or they get whacked from side to side by lobbyists. Or, as Mark Ritchie pointed out, lawmakers conduct “town meetings,” which don’t necessarily allow for “thoughtful in-depth conversation.”

When a legislator has to make a decision, “What can she do?” Crosby asks. “She can look at public opinion polls, or she can look at the lobbyists. But how will she find out the will of the people?”

That’s where Crosby believes the citizens jury comes in. That’s why he founded the Jefferson Center for New Democratic Processes, the organization that developed citizens juries. Over an extended period of time, listening to balanced witnesses, using professional facilitators, they argue and compromise and deliberate on key civic issues.

“This is an informed microcosm of the public,” said Hottinger.

Energetic, fit and plaid-shirted, Crosby, 72, is also the bankroller of the platform: this Citizens Jury on Election Recounts will cost about $200,000; besides the stipends to the jurors, there are expenses for housing and food, for videotaping the nine days of work, for preparing materials, for painstakingly selecting the participants.

Crosby has got the dough because, he said, “of my judicious choice of wealthy great-grandparents.” He is a descendant of the Crosby and Washburn families, the founders and builders of General Mills.

He calls himself “a radical democrat, with a small ‘d.’ “ 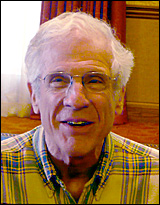 A search of campaign contributions garners very little in his name. His wife, Pat Benn, chair of the board of Healthy Democracy, is a consistently left-of-center contributor to campaigns. But, Crosby said, the outcomes of citizen juries are not pre-ordained or tilted to the left. Data from previous juries show that jurors themselves have found the process balanced.

Said Hottinger: “The process is designed to avoid a pre-existing bias.”

Still, to brush the recount jury process with particular credibility, Hottinger worked to gain the support of Ritchie and Brod, who are tied to different political parties.

“Healthy Democracy” officials asked that jurors — like a jury during a legal trial — not be available to the media until their deliberations are complete. We abided by that policy. That’s why there are no comments from jury members in this story.

MinnPost will report on the final recommendations when they’re released on July 18.

Oregon experiment
Last month, the governor of Oregon signed into law a bill that requires citizen juries to evaluate voter initiatives that come onto that state’s ballot.

Oregon is a state that operates on the initiative system; if you can get something on the ballot, then voters can change laws. So Healthy Democracy Oregon, another Crosby creation, lobbied for citizen juries to aid voters on initiatives.

Generally, Crosby said, initiatives “get sold on sound bites and lots of ads.”

Now, Oregon citizens juries’ findings will be included in voter pamphlets when people go to the polls. Voters who need guidance will know what their fellow citizens thought after being schooled on some otherwise-esoteric public policy matters.

For more information on the meeting of the National Association of Secretaries of State, go here.

"Learning from the 2008 U.S. Senate Recount Saga: Practical Reforms to Improve Minnesota Elections" The session will be Friday at 10 a.m. the University of Minnesota's Humphrey Institute. Participants include DFL Sen. Ann Rest, chair of the Senate State and Local Government Operations and Oversight Committee; Republican Rep. Tom Emmer, ranking minority member of the House State and Local Government Operations Reform, Technology and Elections Committee; and Lawrence Jacobs, a political science professor at the University of Minnesota.