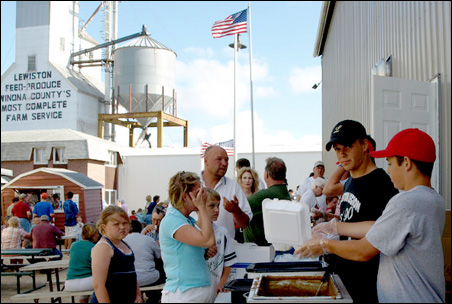 MinnPost photo by Sharon Schmickle
Lewiston celebrated Heartland Days with a chicken barbecue and other festivities even though the town has lost some 200 jobs and its only grocery store this year.

LEWISTON, Minn. — Heartland Days featured everything you could want from a summer festival in a sweet town like Lewiston, Minn.: a chicken barbecue, flags, fireworks and wholesome beauty queens tossing candy along the parade route.

Still, Craig Porter worried about the future of this town of 1,500 even as he sold hot dogs from a trailer at the tractor pull. He’s the president of the Lewiston Area Chamber of Commerce. And commerce is severely threatened here.

The town’s largest employer, Herff Jones Inc., scaled back its Lewiston operations this year, laying off some 200 workers. And the town’s only grocery store closed in June.

“This is a drag on how people think about the future of the town,” Porter said. 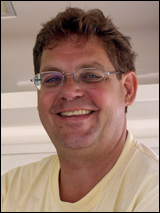 The heartland is hurting along with the rest of the nation.

Overall, the recession didn’t hit this region as early or as hard as some other parts of the state.

One pillar of the region’s economy — health care services at the Mayo Clinic and other regional centers — has taken its blows but nevertheless held strong.

With more than 30,000 people on its Minnesota payroll, Mayo draws workers from 50 miles away to its hospitals and clinics in Rochester and provides more jobs at satellite facilities, said Bruce Schwartau, of the University of Minnesota Extension Service in Rochester.

U of M
Bruce Schwartau

“It takes a lot of people to make that place run, and people drive a long way to come to work here,” he said.

Another pillar, food processing, is holding steady too. It has lost jobs, but not as quickly as many other industries.

“Food is a staple,” said former Rep. Tim Penny, now president and CEO of the Southern Minnesota Initiative Foundation. “Everyone needs it. So that is one of the few areas where we are still hanging onto jobs.”

Step further back in the food chain though, to the farm, and you find mixed blessings.

Farmers in southwestern Minnesota had one of their best years ever in 2008 as corn prices soared. But over in the southeast, dairy farmers struggled. Feed costs climbed while milk prices fell, and some farmers sold off their herds.

“Farmers are really stuck when it comes to energy costs,” Penny said. “It impacts so much of their production costs and it impacts their inputs because a lot of the chemicals they use are oil-based.” 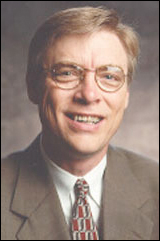 To see the full measure of the recession’s punishment, you need to visit towns where workers manufactured everything from auto parts to glass to hardware supplies.

“We’ve got a lot of manufacturing down here, and it’s taken a real hit,” Penny said. “Many of those employers have had at least a 10 percent workforce reduction.”

And some have closed for good.

Lewiston’s example
The upshot in Lewiston is that fortunes have changed door to door. (See audio/slide-show report below.)

The door closed permanently this month on Wiens Food Center, the only grocery store in town.

This store was more to Lewiston than a place to pick up ice cream. It was one of those small-town hubs where you could get a deal on the ingredients for a church bake sale and some publicity too.

“The kids graduating from high school this spring were born the year we took over the store,” said Scott Wiens. “Over the years, about 120 students worked here.”

Even before the recession, Scott and LouAnn Wiens were struggling to compete with big-box stores in Winona and Rochester. The layoff at Herff Jones, just down the highway, was the proverbial last straw.

“If you didn’t have a clock, you still would know when the workday had ended at Herff Jones because people would stop here and pick up a few things,” said Scott Wiens. “We lost all of that.”

Next door, though, at Lewiston Auto, Scott Nienow said “Business is not too bad, actually.”

It’s a profound observation considering the impact an auto dealership can have on a small town’s economy. This one provides 25 jobs in little Lewiston.

It will be months before Minnesota can tally the damage town by town from the auto industry’s forced closings of dealerships. But it’s a safe bet some communities will suffer.

One key to Lewiston Auto’s success is that people come from miles away to shop here for Chevys.

“We have a larger footprint than just Lewiston,” he said.

Reaching for regional recovery
Now, the region defining that big footprint is Lewiston’s best realistic hope while it looks for new employers or grows them at home. The town has a shot at hanging onto residents who lost jobs here if they find work 30 miles to the west in Rochester or 13 miles east in Winona.

In reaching for regional recovery, Lewiston expresses one of the best prospects for bringing prosperity back to Greater Minnesota. Long ago, identity and loyalty could be tied to one town where a person could work, learn, sleep and shop. And competition for business was defined town by town or at least county by county.

That perspective is changing in the face of global competition, said Scott Marquardt, senior economic development officer for the Southwest Initiative Foundation.

“It’s a new lens for us,” Marquardt said.

Thinking regionally, the initiative foundations and 14 other organizations have launched an ambitious project to boost the competitiveness of 38 counties across Southern Minnesota, home to nearly 1 million people.

Lagging in several indicators
The first look through their new regional lens was sobering. Even before the recession hit, Southern Minnesota lagged behind the rest of the state in per capita income, job growth, productivity and economic staples such as venture capital and broadband access, according to a study by the Rural Policy Research Institute’s Center for Regional Competitiveness in Columbia, Mo.

By several measures, Minnesotans here had been far less prosperous than their neighbors in the Twin Cities. In Fillmore County, for example, the median household income was $43,776 in 2007, compared with $60,943 in Hennepin County and $79,213 in Scott County.

And it could get slower yet, Penny predicted, if the region doesn’t scramble now to recover from the recession.

Still, Penny was optimistic about the long-term prospects.

“There are lots of assets to build on here in Southern Minnesota,” he said.

They include ready-built bases for new innovations related to health care, farming and food processing.

“We’ve got a lot of ideas percolating in this part of the state that are tied to bio medical or pharmacy applications of crops and to animal health as it relates to human health,” Penny said. “We really ought to be on the cutting edge of some of this stuff and we can be if we don’t dawdle.”

Central Minnesota led state into recession
All the way back in 2005, Richard MacDonald saw trouble brewing as he compiled data for ROI Central Minnesota, a quarterly business report he co-authors. Judging from housing permits and other measures, the area’s booming building sector was losing steam.

MacDonald couldn’t have known at the time, but the region was leading Minnesota into a serious recession.

“We started our adjustment before the Twin Cities,” said MacDonald, an economics professor at St. Cloud State University who also serves on Minnesota’s Council of Economic Advisors.

To understand the reasons this region took the plunge first, you need to go back even further, to 1999 when MacDonald started surveying area business leaders. Their biggest problem at the time? Believe it or not, it was a worker shortage.

While agriculture was holding its own, manufacturing also had taken off in the region, creating the kinds of jobs where someone with ambition could learn skills and get ahead with or without a college degree.

MacDonald recalls driving around the region wondering, “My gosh, who is going to buy all of these houses?”

Some of the layoffs are in manufacturing as the global recession depresses orders for freezers, specialized instruments and other items made here. This region relies on manufacturing for 16 percent of its jobs, the highest rate in the state. That compares with about 11 percent in the Twin Cities.

So far, though, manufacturing seems to be riding the recession rather than collapsing altogether. Chances are good for recovery.

‘More than cyclical adjustment’
It’s the construction jobs that worry MacDonald. Some never will come back, he predicts.

“We are seeing more than cyclical adjustment here,” he said. “We are seeing structural adjustment. We will see a smaller share of workers employed in the construction sector. … For the long run, we probably over-allocated to that sector. We got caught up in this froth of things that we are now going to have to take some time to work through.”

Beyond jobs, prices of some homes will fall further, and some construction projects already underway will “not be sustainable,” he predicted.

“I don’t think we are close to reaching bottom yet,” he said.

And while higher education is reeling from state funding cuts, hundreds of high-quality jobs remain stable at St. Cloud State and nearby private colleges.

Of course, there is more to Central Minnesota than the St. Cloud area. Randy Olson works with companies throughout the larger region as vice president of business finance for the Initiative Foundation in Little Falls, one of six projects created with help from the McKnight Foundation to bolster Greater Minnesota’s economy.

If you knew what you were looking for, you could drive north of the Twin Cities on I-94 and see a long lineup of vacant buildings — both commercial and residential — that are the casualties of the recession, he said.

Beyond the developers who went down with the real estate crash, companies in crisis include small-scale cabinet shops, granite countertop makers and businesses that made components for boats.

Some of those businesses will disappear, Olson predicted.

“There are some companies that are simply not in the right sectors right now, that do not have the ability to survive this recession,” he said.

“Owners paid too much for some companies that were acquired between 2003 and 2006, and now they owe more than they own,” he said. “They are upside down on their businesses like so many people are on homes. … We have a number of businesses sold pre-recession that, in hindsight, were valued too high.”

Far more companies are positioned to ride out the recession, though. They include food companies, software developers and many of the tourist attractions in the Brainerd lakes area.

“Sales are flat, margins are not as good as in 2008,” Olson said. “So it’s certainly not a good time. Still, these companies seem to be holding their own.”

Part 1: The big question for economic recovery: Which stresses are merely cyclical and which indicate a cold, new reality?

Minnesota is betting big time on recovery from this recession, but odds are high that some troubling trends are not merely cyclical. To shed light on the odds, MinnPost will examine Minnesota's economy over the rest of this year, assessing damage region by region and looking ahead to prospects for recovery. We begin with this three-part overview.