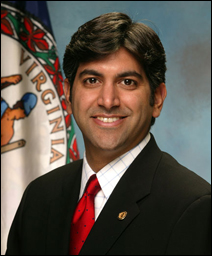 It was, to be sure, a captive audience. Civic educators, activists and secretaries of state, all punching the keypads on their BlackBerrys and iPhones as they awaited his arrival, many trying to figure out new ways to make their organizations or governments work more efficiently, interactively, accountably.

He was, as his press clippings and web links suggested, rock star in quality … even though this tall, dark and handsome presenter’s lyrics were of the high-policy, high-metrics variety.

Aneesh Chopra, 36, came to the Twin Cities over the weekend for the National Civic Summit and National Association of Secretaries of State convention. His presentation, “The Innovation Imperative,” was worth listening to.

As President Barack Obama’s chief technology officer, he has been tasked to use technology, as he puts it, more as a “verb” than as a “noun.”

Here are some random thoughts about — and scattered sound bites and factoids from — assertions and visions he offered. There are lots of links here to explore to understand what Chopra and his office are up to:

• “As a society, we are failing to harness the power and potential of [new] technology and [this] concept of innovation in addressing our role in the global market and assuring America’s position in global competitiveness.”

He pointed to a “heartbreaking” study released earlier this year by The Information Technology & Innovation Foundation.

“We ranked dead last across 40 countries in the rate of change across innovative metrics,” he said.

He linked this lack of rate of change in one category — higher education — to Obama’s call last week for an uptick in community college funding and graduations.

• Open government: Chopra says this is a high priority for Obama, who issued a “Transparency and Open Government” memo on his first day in office.

It emphasizes participation with citizens and civic organizations.

• The first manifestations of that open-government initiative are a couple of rich — although confusing at first examination – websites. One examines federal spending, and the other, data.gov, is a “dashboard” of federal and local data.

Navigating it all is a bit head-scratching, but there’s a lot there.

“It’s allowing the American people to hold our officials accountable for their performance,” Chopra said of the spending site. The data.gov site is designed to “help advance our civic goals.”

• He spoke of a competition, backed by the Sunlight Foundation, called Apps for America 2, designed to encourage developers to create new open-government applications that take advantage of data at data.gov.

• He spoke of the way that technology can be used to increase voter participation. A key tool is one he participated in when he was Virginia’s technology officer. He said his federal office would support the effort, called the Voting Information Project. He said up to 10 percent of the American people used the free site in some way in 2008.

“What’s the civic return on free?” he asked. “The greatest value ever.”

• “Outside-in policy making,” is what he called it. Using technology, the Obama administration is seeking policy-making ideas from citizens, Chopra said.

Using online technologies, citizens can brainstorm, government officials can blog and interactivity blooms, in his view.

An exercise in seeking public input on what data should be classified ended Sunday. Some new rules are expected soon.

• Defense Department: You want to weigh in on military spending? Go to DefenseSolutions.gov

“A single individual who’s got an idea” to work with the government can compete without having to rely on the “multi-billion dollar defense contractors … This is participatory democracy.”

Currently, Chopra is working on an updated data system so immigration applicants can get more individual information about their status. Such a platform is expected to be ready in the next three months.

“We want to take the discussion out of Washington and on to Main Street,” Chopra said, in general, of civic engagement and his office. “We want to more easily engage with you in your communities.”

He added: “Hold me accountable for delivering on all these fancy words that I’ve been sharing with you.”