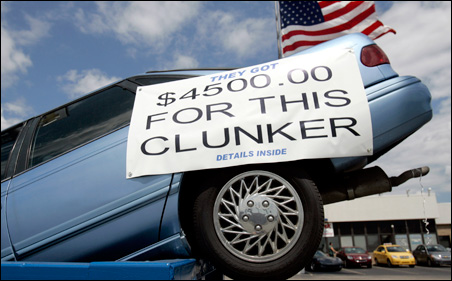 REUTERS/Rebecca Cook
Despite glitches, many consumers have relinquished their clunkers this summer.

By now, we should be seeing a huge increase in the number of Toyota Corollas and Honda Civics on the road — even more than there were before. Minnesota ranks fourth in the amount of federal rebate money requested from the Cash for Clunkers program, at $26 million, just behind Michigan, Ohio and California, Minnesota Public Radio reported earlier this month. The $3 billion program ends on Monday, at 7 p.m. CST.

Tony Brown, the general manager of Burnsville Toyota, said about 170 customers have turned their clunker into cash and taken advantage of this program at his dealership since the program began on July 24. And during the week, he said, he has seen about 50 percent more customers than the dealership normally would.

“It’s made a lot of immediate impact,” Brown said. “We’ve seen an influx of customers; it’s perked up sales.”

To qualify for the program, your vehicle cannot be more than 25 years old and must have a fuel efficiency of 18 miles per gallon or less. To receive the full $4,500 for the vehicle, your new one must be a 10 miles-per-gallon improvement on your old vehicle. For a 5 mpg improvement, the customer can receive $3,500. For many people like Julie Kleindl, from Alexandria, Minn., this is more money than they would normally ever get for their old gas guzzlers at a dealership.

She turned in her and her husband’s 1989 F150 pickup, which ran at 10 miles per gallon, and bought a new 37 mpg Chevy Aveo from Alexandria Motors. She took $3,500 for the pickup with five years of free financing on the Aveo.

“I would get the best deal with a Chevrolet,” she said. “It’s not like I needed a new vehicle, but it was the best alternative. We use it for making quick trips to town. And the payments [we make on the new vehicle] would be our gas bill, so we come out making money on the deal.”

According a KARE11.com report on Thursday, Sen. Amy Klobuchar expressed concerns in a letter to the federal Department of Transportation about how the program has been implemented in Minnesotan and asked for changes to make the program operate more smoothly. The report says, “Even though Minnesota has ranked in the top ten in Cash for Clunkers participation, some Minnesotans have had trouble meeting the program’s requirements due to a discrepancy between the federal program and Minnesota state policy regarding taxes and vehicle registration fees.” Klobuchar had helped fix an earlier glitch in the program.

Salvage and the crusher
The dealerships don’t make money on the clunkers; they send them to a salvage yard, Brown said. There, they melt the motor, save scrap metal and remove parts to sell if possible, but the rest of the car is crushed or shredded. About 10 days later, the dealership will receive a rebate from the National Highway Traffic Safety Administration.

“It’s a great deal for the middle and lower classes,” Kleindl said. “Sure, people talk about how they can’t afford a new car, but how can you afford not to with those gas guzzlers? When you work the numbers, it’s a no-brainer.” 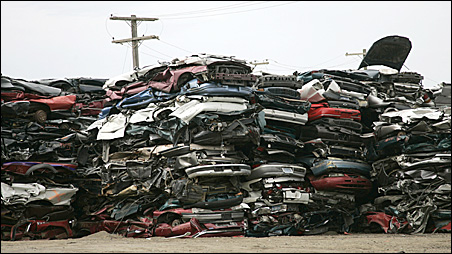 REUTERS/Rebecca Cook
Newly crushed vehicles sit in stacks before being shipped to a shredder at U.S. Auto Supply in Detroit.

And it was obviously a no-brainer for more Americans than Congress was expecting when it approved the initial $1 billion for the program in June. Just over a week after the program started, $2 billion was added to keep the program afloat.

While this has been a great deal for people holding on to older, larger trucks and SUVs, there is some debate over other incentives of the program, like the extent of environmental benefits it will bring by getting more gas hogs off the road and replacing them with smaller, more fuel-efficient vehicles.

“I don’t know if it will make a huge difference [for the environment], to be honest,” Brown said. “You still have your diesel vehicles, semis, industrial equipment that will always be out there.”

“It’s less consumption, so it’s a step toward being less reliant on all that gas,” she said.

Others are also arguing that with the destruction of all these old, usually American, vehicles, repair shops’ business will start to decline within the next 10 years.

“But even new cars need some kind of maintenance,” Kleindl said.

Emily Ness is a MinnPost intern.

Tell us about your experiences. Have you turned in a clunker? Or are you a dealer who’s worked with the Cash for Clunkers program? MinnPost would like to hear from those who’ve been involved with the program. We hope you’ll describe your experience in the Comment section below.