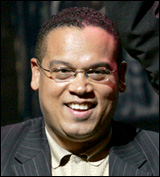 His message today: It’s not the time for those who believe fundamental reform in health care is needed to get discouraged. Not the time to become cynical about President Obama’s moments of wavering.

During a teleconference with the national media and in a separate interview with MinnPost this morning, the Minneapolis congressman expressed optimism that Congress would pass health care reform, with a public option, by the end of fall.

Ellison still confident of success
“I’m confident we’ll win this thing,” Ellison said following the news conference. “I hope I’m not confident for no good reason. The time for change has come. Things are lining up right.”

Sixty members of the Progressive Caucus have “drawn a line in the sand,” saying they will NOT support anything short of reform that includes a public-option health insurance program. The concept of co-ops supplanting the public option plan is not good enough, those signing the letter have said.

Ellison, a passionate Obama supporter, admitted following the news conference that he believes it’s necessary for the president to again make it clear that the public option plan is the only acceptable solution.

“There are a lot of people who think that Obama and [Secretary of Health Kathleen] Sebelius made a tactical mistake by seeming to back off. … He can’t hand it [the public option] away without a political price to pay. That’s not a bad thing. He might think he can walk away and say, ‘I brought more reform than we’ve had in 60 years.’ But we [in the progressive caucus] are saying, ‘That’s not enough.’ ”

Isn’t it hard to buck the president?

“I see myself as helping the president,” Ellison said. “I’m supporting the plan he has always wanted. We’re putting him in a position where he can say, ‘I can’t water it down. Those progressive guys — including Ellison — are helping me.’ ”

The progressives are getting help from surprising quarters, Ellison said with a laugh.

“When [Iowa Republican Sen.] Chuck Grassley says, ‘I’m still not voting for it’ [a co-op system], that shows there are people here who won’t accept any reform,” Ellison said. “The problem for them is not this feature or that feature, it’s any reform at all.”

Ellison said he has written letters to the president urging him to stand firm for a public option plan.

He says Obama ‘will do the right thing’
During the news conference, Ellison was less direct about the administration’s waffling.

“This is not the time to become cynical about the president,” he said. “Raise your voices. He will do the right thing. … If I was disturbed when I thought I heard wavering, I have been reassured by the next things I have heard.”

That this debate is so harsh and fluid should come as no surprise, Ellison said in the news conference.

He compared the debate to the women’s suffrage movement and the 1960s civil rights movement in terms of importance and creating fundamental change.

“This was foreseeable,” Ellison said. “If you look at the amounts of money involved — the CEO pay, the amounts of money given in campaign contributions, the investment in lobbying from the industry — you see what a high stakes game this is. People are reaping benefits from this system. I guess I am surprised at how difficult it is, but I shouldn’t be. This was always going to be a battle.”

Roger Hickey, a co-director of a progressive organization, Campaign for America’s Future, also was involved in the news conference.

Hickey said that it will be the House, not the Senate, that will define the outcome of this cultural/political battle because “the House is more reflective of the will of the American people.”

He took an indirect shot at North Dakota Sen. Kent Conrad, a creator of the co-op option. Senators from “sparsely populated states” don’t speak for the country, Hickey said.

Grijalva, who entered the news conference late and left early, agreed, saying that it’s important that the House create “as strong a bill as possible” to take to conference committee with the Senate.

Do 60 members of the Progressive Caucus actually have enough clout to shape what happens?

“The caucus is actually about 80 people,” said Ellison, the only member from Minnesota’s congressional delegation. “The [line in the sand] letter is a function of two things: who we could get a hold of to sign the letter and those who are truly saying they will support only a plan with a public option.”

Beyond the caucus, though, Ellison said that there are many members — including Blue Dogs and a substantial number of newly elected representatives — who share the caucus’s passion.

Too many proponents of a public plan have become discouraged too quickly, Ellison said.

“The [public option] plan was laid out, then the side that wants the status quo had its say,” said Ellison. “The tea-baggers have taken their best shot. Now it’s time to get to the truth. We’ll see that the public option is the way to lower cost, break up the monopolies and give people the real reform they voted for last fall.”