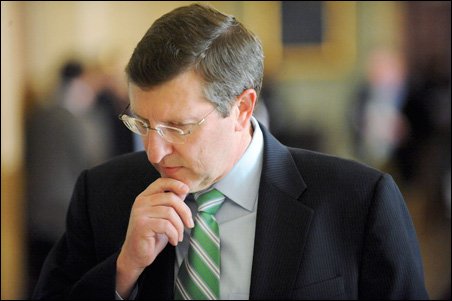 REUTERS/Jonathan Ernst
Sen. Kent Conrad is being challenged at home and in Washington over his health-reform views.

MAYVILLE, N.D. — Sen. Kent Conrad, D-N.D., architect of the co-op alternative to public option as part of national health-care reform, got some push-back Tuesday from constituents to go with complaints from congressional colleagues who still favor a government-run insurance option.

At a health-care forum in this Red River Valley community of about 2,000 people, a woman cited polls that she said show a majority of Americans support a public option for insurance coverage despite efforts by opponents to discredit it as socialized medicine.

“How can you continue to ignore what people want?” she asked.

“I have to deal with reality,” Conrad responded. “There aren’t the votes to pass public option in the United States Senate.”

Conrad, chairman of the Senate Budget Committee and a member of the Finance Committee, where the Senate’s health-care reform legislation is being drafted, is among six senators — three Democrats and three Republicans — charged by Senate leaders to draft a bill that would extend coverage to most Americans, contain costs — and win bipartisan support.

‘If you do the math, it’s pretty clear’
The bill will need 60 votes to clear a filibuster, he said, adding that no Republicans will vote for legislation that contains a public option and at least three Democrats have declared themselves firmly opposed.

Not satisfied, another questioner asked Conrad whether he’s pushing co-ops just because that could get the necessary votes or because he believes in the concept.

“In my life experience, co-ops work really well,” he said, listing a half dozen examples ranging from small rural electric and telephone cooperatives common in his state to such giants as the Farmers Union, Ace Hardware and the Associated Press.

The cooperatives approach also “seemed to have a chance at bridging differences,” Conrad said, although “some progressives seem to have forgotten” that the cooperative movement was an important part of the American progressive movement in the early 1900s.

Challenged by Washington critics
As he makes his way through health-care forums in towns across the state, Conrad also is responding to critics back in Washington, D.C., who question whether health-care cooperatives would be strong or effective enough to compete with private insurance plans.

“We know what co-ops do and how they function,” Conrad said on MSNBC’s “Andrea Mitchell Reports” Tuesday. “And it gives us the only hope for a bipartisan approach.”

State-based or regional cooperatives could draw 12 million members, he said, making the co-ops together the third-largest insurer in the country, “and that would provide meaningful competition.”

In Mayville, Conrad said that House reform bills with public option “would be a disaster for North Dakota” because reimbursements would be tied to Medicare payment schedules.

“Every single hospital in North Dakota goes broke” if that payment standard is applied to more patients through a public option plan, he said.

Another query in Mayville
Still, the question returned: Andrew Lindner, 28, of Fargo, a volunteer for the liberal advocacy group MoveOn, asked Conrad if he would prefer the public option if the votes could be found to carry it on the Senate floor.

“That’s not how I spend my time,” the senator replied, “answering every hypothetical question out there.”

Conrad said he wasn’t surprised by the questions at home or by angry words from liberal members of Congress who reacted over the weekend to hints the Obama administration was stepping away from public option as being “essential” to health-care reform.

“It’s a matter of disappointed expectations,” Conrad said. “I can understand that. But I have to deal with reality. It doesn’t do any good to deal with hoping and wishing.”

Sees public-option debate as a distraction
The debate over public option vs. cooperatives is detracting from “what is centrally important to reform, which is reform of the health care delivery system,” he said. He wants to see instead a focus on legislation that would encourage preventive medicine, fee schedules based on outcomes rather than on services provided, and teams of physicians working together and sharing diagnostic and other resources.

As a part of such overall reform, “this co-op model could be a very effective competitor” with private insurance providers, he said.

His “group of six” continues to work on the reform bill and will not be pushed into meeting any arbitrary deadlines, he said. The committee has sent an outline and certain provisions of its draft bill to the Congressional Budget Office to assess financial consequences of possible changes.

“I don’t believe we’ll reach a conclusion this year that resolves all problems,” Conrad said.

He said the Senate bill will cover 92-94 percent of all Americans but “will exclude people who are here illegally” and healthy young people who refuse to buy insurance.

“I’m concerned about the future of our country,” she said. “I feel we’re becoming Socialist, and this is a very big part of it. … Doing nothing would be better than this.”

But Conrad said rising health care costs are “unsustainable,” and he warned that Medicare will be bankrupt in eight years without significant reform.