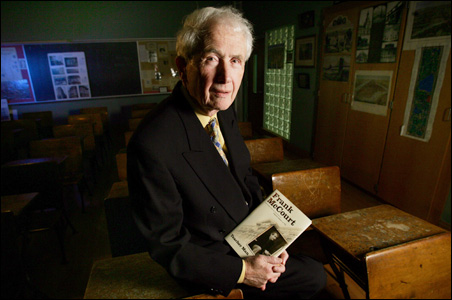 REUTERS/Mike Segar
Author Frank McCourt poses for photographs during an interview with Reuters at Stuyvesant High School in New York City in 2005.

If you were tracking the news from Ireland over the past two weeks, you might have noticed the ironic coincidence of two stories.  When the author of the international best seller “Angela’s Ashes,” Frank McCourt, died on July 19, the Irish press was as quick to praise him in death as it had been to condemn him a little more than a decade ago when he published his controversial memoir of his poverty-stricken childhood in Ireland. A few days after McCourt’s death, legislation came before the Irish Dail that would make acts of blasphemy a criminal offence.

Is someone in Ireland afraid that there might be another McCourt in the works?

When “Angela’s Ashes” appeared in print in 1996, McCourt’s depiction of his childhood in the slums of Limerick was a punch to the solar plexus of Irish respectability. The Celtic Tiger was then just rising with its promise of a new economically prosperous Ireland and was not amused by McCourt’s stories.

There were charges that McCourt fabricated or grossly exaggerated the facts. This struck me as a bit disingenuous. After all, Irish writers have a long tradition of stepping over a few facts when they get in the way of a good story. The real complaint against McCourt seemed to be: Why did he bring all this old stuff up now just when Ireland was promoting a new image?

The prophet has no honor at home award went to McCourt’s childhood hometown of Limerick. The money in Limerick was not on McCourt’s side.

“Particularly incensed,” one observer wrote, “were the citizens of Limerick who, by the late 1990s, had embraced the idea of Ireland as the Celtic Tiger and wanted only modernity, change and growth. Talks of typhoid, rats and outside lavatories were not welcome.”

By the late 1990s, Limerick was boomtown in the Irish equivalent “silicon valley.” A Dell Computer Plant opened in 1991 bringing more than 4,000 jobs to the city. Other hi-tech firms followed Dell’s lead. Johnson & Johnson opened up a facility in the city. By the time “Angela’s Ashes” was published, Limerick had already demolished its slum district — the “lanes” of McCourt’s childhood — and put in their place a park along the Shannon River and new office buildings.

Charges of lies and plagiarism
One of his fiercest critics, Paddy Malone, had been a childhood friend and neighbor of McCourt in the “lanes.” Malone ripped up a copy of “Angela’s Ashes” at a reading McCourt gave in Limerick, charging his one-time friend both with lies and plagiarism. The photograph on the back of McCourt’s book, Malone alleged, was his photo. The international film star Richard Harris, also a Limerick man, went to the town’s radio airwaves to charge McCourt with slandering not merely their hometown. Harris also attacked McCourt for slandering his own mother.

A popular Limerick radio host, Gerry Hannan relentlessly pursued McCourt’s case. Hannan may have had ulterior motives. He had written two volumes of memoirs about his own Limerick childhood that was much happier than McCourt’s.

I had only one encounter with Limerick’s anti-McCourt lobby. It didn’t happen in Limerick — a city I have only visited once and spent most of my time lost in traffic and asking for directions to another town. Far away from Ireland, my Limerick moment happened in the unlikely setting of Nebraska.

It was the summer of 1998, when the squabble over “Angela’s Ashes” was still in the literary news. Driving back to Minnesota after a vacation in the Rockies, I ventured into North Platte, bypassing the franchise land that has sprung up along the I-80 exits and heading into the now mostly forgotten town center.

A storefront sign read “Espresso and Irish Specialties.” Inside, I found a floor space from another era living out the last chapter in its retail life as a used books and furniture store. At the back of the store, a fountain counter featured espresso drinks, sandwiches and Irish trinkets. An older gentlemen stood behind the counter.

Overhearing his accent, I asked him: “So, if you don’t mind my asking, where are you from?”

“Limerick,” he replied with a brevity uncharacteristic of the Irish.

I couldn’t resist. “So,” I continued, “did Frankie McCourt make up all those stories?”

“That’s right,” he said. “And how old do you think Frankie McCourt is?”

“That’s right. Same age, same Limerick, same time.” The man was visibly angry. “Now you tell me how could McCourt tell the world all those terrible lies about the Church and the priests?”

I changed the subject, asking if he had seen the beautiful Church of the Immaculate Conception just across the state line in Kansas.

‘It’s begrudgery’
To make sense out of why so much vitriol had been poured on McCourt, I turned to St. Paul’s Jim Rogers, writer and managing director of the Center for Irish Studies at the University of St. Thomas. Although Rogers has reservations about McCourt as a writer, he attributed the spitefulness of the critics to something other than literary standards.

“The Irish have a word for it,” he explained, “it’s begrudgery.”

“Angela’s Ashes” reaped for its author more than $8 million in international sales, a Pulitzer Prize and a box-office hit movie version. It’s hard not to be envious.

Rogers also sees a much more sensitive issue at play in the reaction to “Angela’s Ashes.” McCourt depicted an Irish Catholic Church that did nothing to help to his desperate family. A priest literally slammed the door in the face of the young Frankie McCourt when he sought help. In the years of the Irish Free State and early years of the Republic of Ireland, a cash starved Irish government was all too eager to fob off on the Catholic Church the responsibilities for providing social services.

Although McCourt may have overstated his point, Ireland understated the Church’s failure in social policy. Rogers suggests that there’s a lesson to be learned here. “Ireland tried ‘faith based initiatives,'” he said, “and it didn’t work.”

What is more, in 1997 McCourt’s “Angela’s Ashes” was the first in a series of messages about a trust betrayed by the Irish Catholic Church. In 1998 a story broke about the discovery of a mass grave of 133 young women unearthed when the Good Shepherd Convent was closed in Cork. The women were among the thousands of “Magdalenes.” These were young Irish girls committed to orphanages run by the nuns where the girls labored in the infamous Magdalene Laundries. Their crime was to have born a child out of wedlock or perhaps to have impressed a parish priest, teacher or family member as displaying a promiscuous personality.

The worst news was yet to come. This May a court-appointed commission released the Ryan Report, which documented an “endemic” culture of abuse and rape in Irish church-run orphanages. From the 1930s until the last facility closed in the 1990s, more than 30, 000 Irish children underwent detention in these facilities chiefly run by the Christian Brothers order. The testimony revealed how the crimes of abuse against the children were compounded by the complicity of politicians and church officials both eager to cover up the matter. The public testimony that accompanied would have made even McCourt wince.

In the 1930s, McCourt was probably only one step away from becoming one more statistic to appear in the Ryan Report.

Paying tribute
Limerick has put aside its feud with McCourt. Its mayor wants to pay tribute July 20 to its most famous literary son by having his ashes spread across the Shannon and erecting a statue of McCourt to stand beside the city’s other most famous son, the actor Richard Harris.

Better rethink the latter idea. Harris and McCourt once got into a bar room brawl in New York. A “walking tour” of McCourt’s childhood neighborhood is one of the city’s major tourist attractions even if all the tour guide can show the tourists is where McCourt’s “lanes” stood before their demolition in urban renewal.

The city’s change of heart may be a sign that now that the ride on the Celtic Tiger is over, Limerick sees less of a need to disguise its history of poverty. Dell has announced plans to close its Limerick plant in 2010. Other hi-tech firms are following Dell’s lead. Familiar old stores are closing their doors. Unemployment today in Limerick is 14 percent and predicted to rise as high as 25 percent next year.

Maybe Limerick has decided in these hard economic times it makes no sense to knock McCourt. The “Angela’s Ashes” walking tour maybe the best thing going for the Limerick economy these days.

Meanwhile, the Irish Dail weighs the merits of a law criminalizing blasphemy. Somebody in Ireland must want legal protection in place in case McCourt embarrasses them by writing from the grave yet another volume of memoirs.