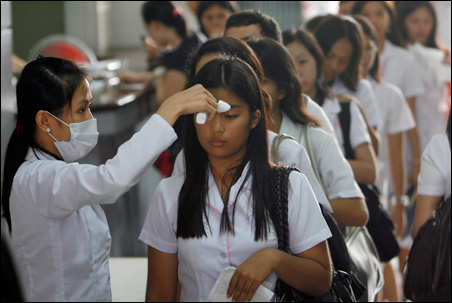 REUTERS/Romeo Ranoco
Precautions against the new flu strain are being taken worldwide. Here, health workers at Centro Escolar University in the Philippines take students’ temperatures in June on the first day of school.

Unlike the typical flu that sends us to our beds coughing and feverish in winter but retreats in summer, the new influenza virus that surfaced last spring isn’t taking a summer vacation.

Because that could mean trouble when schools open their doors come September, state and federal health and education officials are on alert.

Also, those increased worries about the flu arrive at a time when many of Minnesota’s school nurses say they are understaffed because of education budget cuts.

“We want to make sure we are looking very closely this year at what is happening,” said Pam Gahr, epidemiologist with the state Department of Health, because viruses are constantly changing and “people haven’t seen this in their immune systems, and we don’t have a vaccine.”  Researchers are working on an influenza vaccine, expected sometime this fall.

The federal Centers for Disease Control reports that the H1N1 virus (formerly referred to as “swine flu”) is continuing to cause sickness, hospitalization and deaths in the United States through the normally flu-free summer months. That includes Minnesota, where one elderly person and two children have died from it as of July, though the state health department announced all had underlying medical conditions. Worldwide, more than 1,100 persons have died from this virus since April, according to the World Health Organization.

In addition, this so-called “novel,” or new, virus seems to concentrate on those ages 5 to 24, suggesting there will be more cases of influenza when students return to class and unintentionally share the virus.

Because there is uncertainty about the virus and whether the typically mild symptoms seen so far will morph into something more dangerous, health officials are working on a more extensive surveillance system, which includes school nurses, Gahr said.

Actually, it is school nurses who often will find themselves at ground zero when influenza strikes.

“We’re on the front lines,” said Ann Hoxie, assistant director of student health and wellness for St. Paul Public Schools. Hoxie means it is often the schools and, by extension, school nurses who see the first signs of widespread infectious disease, anything from strep throat to diarrhea or chickenpox or influenza.

And deal with it first.

More than 80 percent of the 130 school nurses, administrators and supervisors responding to the online survey said they are understaffed to meet students’ health needs. More than half said nursing positions were trimmed to save districts money.

“Sadly for Minnesota students and their parents, epic underfunding by state government has forced school districts to cut the number of school nurses,” wrote  John Fitzgerald, a 2020 fellow and author of the report, last spring. “All major school health organizations — the Center for Disease Control and Prevention, the National Center for Health Statistics and the National Association of School Nurses — recommend a school nurse-to-student ratio of 750 to one. Minnesota’s school nurse-to-student ratio is 1,404 to one, which is 30th in the nation.”

Since then, the state’s ranking has dropped. Minnesota now sits 35th among states in the ratio of students per school nurse, according to the National Association of School Nurses. (PDF) That’s one school nurse for every 1,083 students. Some districts have assigned school nurse duties to school secretaries, teachers, aides and coaches, according to the 2020 report..

“It means nurses will have higher number of kids and not be as directly available to take care of your sick kid who has a temperature of 102 when you’re not able to get there quickly,” nurse Hoxie said.

Health services often among school cuts
The survey noted a 4.4 percent funding drop to school districts statewide between 2003 and 2008, cuts that forced reductions across the board, including such support services as health services. It also cited a Minnesota Department of Health report that the number of uninsured children in the state rose from 4.7 percent in 2001 to 6 percent in 2007.

Many school districts are financially strapped. St. Paul Schools, for instance, faced a $25 million deficit and had to cut their budget. “Sure, school nurses shared in that,” said St. Paul district spokesman Howie Padilla.

Bottom line, said Charlie Kyte, who heads up the Minnesota Association of School Administrators, is this: “We’d love to have more school nurses, but when it comes down to sheer numbers, we center on the core numbers: putting teachers in the classroom.”

School nurses have a public health role as well, notifying parents, teachers, administrators and health officials about illness, as well as answering such questions as: “How do I care for my child?”

Schools will report the incidence of H1N1 more frequently and school health personnel will be in closer communication with state health officials this school year, epidemiologist Gahr said. School nurses and state officials are meeting this summer to work out details.

Logisitics could be an issue for schools, too. H1N1 influenza vaccinations could begin as early as October — perhaps in school settings, according to reports from the federal government, and children may need to receive the preventative in two doses. Some parents will find it difficult to get their children to two medical appointments and to also make sure children have a seasonal flu vaccine as well.

There’s no knowing at this point how severe H1N1 could be this fall, yet health officials currently recommend that those infected with the virus stay home for seven days. Such a restriction could have far-reaching economic and education effects in schools and workplaces as parents  miss work and students fall behind in school.

Yet people can take precautions to avoid contagion or passing the virus along. The standard advice: “Wash your hands, cover your cough, stay at home when you’re sick,” advised Cynthia Hiltz, health service coordinator for Anoka-Hennepin Schools.

Cynthia Boyd writes on education, health, social issues and other topics.  She can be reached at cboyd@minnpost.com.

Find other influenza information and links at these sites: