Update: Gays and lesbians in committed relationships now will be able to become ministers in  the Evangelical Lutheran Church of America.

With 55 percent support on a 559-to-451 vote, delegates to the ELCA assembly, meeting in downtown Minneapolis, voted Friday to overturn a ban that prohibited gays and lesbians from ministerial positions, unless they took vows of celibacy.

That 55 percent figure proved significant in action on the emotional issue because of an earlier effort by opponents to require a super-majority, 60 percent, to repeal the ban. That effort failed.

What remains to be seen is how conservative members of the organization will react to the fundamental shift in policy. There were threats Friday from leaders of some churches that they would withdraw from the ELCA. Of course, others had said their churches would withdrawn from the ELCA if the ban wasn’t repealed.

Bishop Mark Hanson, head of the ELCA, called for calm – and prayer – from all parties.

The new policy gives individual churches within the ELCA great leeway. Churches within the organization will be allowed to hire homosexuals, but no churches are required to consider gays or lesbians during their search for ministers.

So close now. In spite of fears and threats and even a tornado, the Evangelical Lutheran Church in America seems on the verge of repealing a ban that prevented gay and lesbian ministers from leading churches unless they promise to be celibate.

The vote is to come tonight at the weeklong ELCA assembly in Minneapolis. Votes on related subjects earlier in the week indicate that the ban will be repealed.

“I thought I was going to be one of those people who worked a lifetime and passed away before this action was taken,” said Anita Hill, pastor at St. Paul-Reformation Church and a self-described “grandmother” in this movement. “I have been thinking of all those women who worked so hard to make it possible for women to be ordained but never saw it happen. This is extraordinary.”

But there is another group of people Hill is thinking about as this vote, which has ramifications beyond Lutheran sanctuaries, approaches.

“I understand there are people so painfully hurting because things are changing,” said the St. Paul pastor. “This is shaking up their faith. I had some of those feelings in my first seminary class: I was learning that what I thought was true, was not true anymore. I understand it’s a hard place to be.” 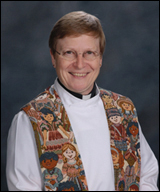 And, assuming that this body does move forward and lift the ban, it’s not known how much anger there will be — and how many members will leave churches, and how many churches may split from the ELCA, which has nearly 5 million members in more than 10,000 congregations.

Hill understands all of this in unique ways.

On April 28, 2000, the Reformation Church voted unanimously to call Hill to become a pastor. Up to that point, Hill had been a lay pastor and staff member at the church for more than a decade.

Because of her long-term commitment to Janelle Bussert, a commitment now in its 16th year, Hill could not promise celibacy.  The church was censured by the ECLA, but within a few years the censure was quietly lifted. Still, Hill’s name never has been listed on the roster of ELCA pastors next to the name of the church.

It’s almost as if the ELCA has played a massive don’t-ask, don’t-tell shell game for the last decade as its grappled with an issue that other mainline protestant churches have grappled with, some with less rancor than others.

But under Hill, who now is co-pastor with Keith Olstad, the little church has prospered, its membership greatly increased.

“I’m told the ELCA did a study on reconciling,” Hill said. “Membership and benevolence go up in welcoming churches. I’m hopeful that this can be part of an evangelical opportunity. We can re-evangelize the de-evangelized; those people who felt there was no place in the church for them because of the policy [on homosexuality].”

Hill has not hidden in her little sanctuary. She has pushed for this vote for years, deciding that long ago she would work to change the system from within.

Hill, 58, did not start out as Lutheran. She didn’t even acknowledge — or perhaps know — she was a lesbian into young adulthood.

She grew up Catholic in the South, attended Mississippi State University and met and married a young man who aspired to be a lawyer. In the 1970s, the couple moved to the University of Michigan, where Hill met a woman in her workplace who also was a Lutheran Church organist. She fell in love.

Obviously, this was a time of awful chaos for Hill. There was a divorce. There were meetings with a Lutheran pastor “who helped me walk through” the place she suddenly found herself.

Her life was starting over again.

There was a point during her divinity studies in the early 1990s that she was researching theology of the United Church of Christ, a denomination that was ahead of the curve in being open and affirming to gays, lesbians, bisexuals and transgender people.

“But what that study did for me was confirm that I’m a Lutheran,” she said. “My theology is Lutheran. It’s the place I’ve been taught about grace and scripture as a guide, not a rule book.”

Change has come, member by member, church by church. But leading up to this week, there also have been huge disappointments as the ELCA has grappled with how to deal with homosexuality.

But her own congregation and others throughout the country “have always been there with support and hope,” she said.

There have been extraordinary times. There was her own ordination, when her church was packed to overflowing. There was the commitment ceremony at her church with her partner and the wedding dance that followed in the church basement. There have been visitors from all over the country who stop by St Paul Reformation to get a feel for the first church in the Midwest and one of the first in the country to open its pulpit to gays and lesbians.

Now this. The ELCA is moving so close to a major shift.

“It’s a bit of an emotional roller coaster,” said Hill. “All summer, I’ve been cautious, but I keep being dragged to the side of hope.”

In the midst of the tension over this issue, there has been time for laughter.

The tornado came oh-so-close Wednesday to all those Lutherans in downtown Minneapolis, leading to over-the-top comments in some quarters questioning whether God was expressing displeasure with the proposed change.

What was the meaning of the close call?

Hill laughed and said that very question was brought to Ross Murray, associate director of Lutherans Concerned, an organization supporting total inclusion of gays and lesbians.

“He pointed out that after the storm, the sun came out,” said Hill.