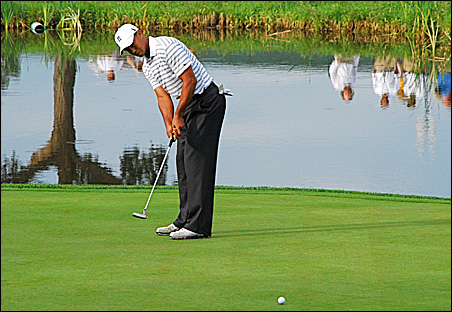 Golf owns an economic and political role in American history. Presidents and corporations embrace it. People play hooky from work to play it. A multiracial superstar blazed a crossover trail years before a multiracial commander-in-chief.

The game weaves itself through Minnesota’s cultural and recreational tapestry, too. Per capita, more Minnesotans play golf than in any other state, more than 16 percent of us on a regular basis. Studies show eye-popping economic activity generated locally because of golf.

The national and local significance of the sport is about to become apparent as Hazeltine National Golf Club plays host to the PGA Championship, transforming Chaska into this week’s largest global sports stage.

Hazeltine itself serves as a peculiar intersection of Minnesota and golf history, where social barriers were quietly broken 50 years ago in a state once known for its anti-Semitism, and where women, long discriminated against in sports, were treated equally before they were at most local courses.

This 2009 PGA Championship will stand, too, as a golf-business anomaly; the gentlemanly sport has taken it on the chin from the struggling economy and a post-AIG backlash of corporate perks. Still, the event at Hazeltine has virtually sold out its tickets (ranging in price from $300 to $425 per person for the week) and enjoyed solid support from local and national companies, in which fees for assigned tables in hospitality tents to owning a private “chalet” near the 18th tee ranged from $20,000 to $375,000. As a sign of the economy, companies have focused on the lower end of the price list.

The expert
Orin Starn is a cultural anthropologist of much renown at Duke University, with his scholarly work focused on “Ishi’s Brain” and the politics of Peru. Acclaimed, serious stuff. Then, there’s his other area of expertise: the anthropology of golf. A few years back, he helped organize a seminar titled “Tiger Woods ©: American Empire, Global Golf, and the Making of a Megacelebrity.” And he writes a thoughtful blog called GolfPolitics. Starn’s first piece of teaching to students is “the airplane test.” Get on an airplane, look down, he instructs. See the vast areas of green with dots of brown-beige. Golf courses abound.

“Golf courses are part of the American ecology,” Starn told MinnPost in an interview, and golf is “the official sport of American presidents and American capitalism.” 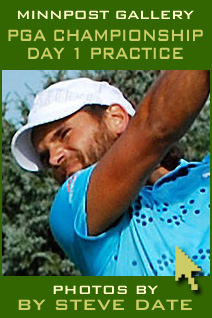 A brief lesson from Starn teaches a listener that the marriage of big business and golf hearkens back to the beginnings of American mega-capitalism, when robber baron Andrew Carnegie became a golf freak.

So, too, is the marriage of golf and civil rights. By the 1920s, Jews were forced to open their own country clubs because they were barred from the mainstream clubs. After World War II, the rise of municipal courses allowed for the development of African-American golfers. Another phenomenon was the role of the white working-class and black caddie; being a caddie used to be a launching pad for pro golf careers for immigrants and the grandchildren of slaves. Amid this, golf and the presidency were popularized when President Dwight Eisenhower became the nation’s “duffer grandfather,” as Starn put it.

Because it so succinctly reflected American power and values, golf was rejected by the most revolutionary of the Communist leaders of the 1960s, Fidel Castro and Mao Zedong. The game was virtually banned from Cuba and China. And no wonder. Golf seems to breed conservative viewpoints.

In a 2006 Sports Illustrated survey of 76 U.S. pro golfers, 88 percent of tour players said they supported the American invasion of Iraq, and 91 percent supported President George W. Bush’s nomination of conservative Samuel Alito to the U.S. Supreme Court. For what it’s worth, 100 percent of the players said they hadn’t seen the film “Brokeback Mountain.”

With Castro and Mao in mind, Starn joked: “When golf is gone, we will have reached the promised land of Communism.”

But the Commies seem to be going out of business quicker than Nike. Here’s the sign: After years of golf being shunned in Cuba and China, the game is coming back in those peoples’ oases. Capitalism endures.

Hazeltine’s history
Hazeltine is no Havana, but it is somewhat radical, compared with other private golf clubs. No pool. No tennis courts. Call it a country club and you risk getting whacked across the knees by a six iron. The place about 40 minutes southwest of Minneapolis is only about golf.

As private clubs go, Hazeltine’s history is noble. Back in 1960, the club broke social ground when its charter members asked Jewish liquor distributor and philanthropist Jay Phillips to be on its first board of directors. 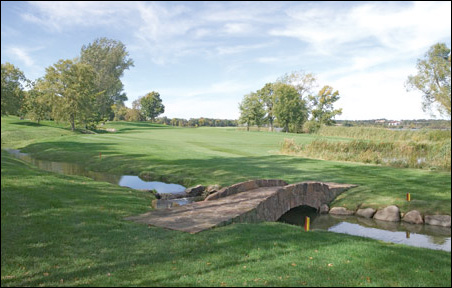 Minneapolis, of course, had been nationally known for its anti-Semitism. Hazeltine’s board took some heat, Bob Fischer, a longtime Twin Cities banker, told me for a story I wrote in 1991. “I heard from friends — ex-friends now — who said we were going to ruin the town,” said Fischer, who died in 2008. “We thought it was a good idea. We did it consciously. We talked about membership and decided all you had to be was a golfer and honor the tradition of the game. Yes, you had to be a gentleman. You didn’t have to be a lady then.”

But Hazeltine, which opened for play in 1962, was forward looking on the gender equity frontier, too. Hazeltine always allowed women to be voting members. Women joined the board of directors in 1976. In 1986, when most country clubs began debating whether women should have equal access to tee times, Hazeltine lifted restrictions without rancor.

Corporatization in play
It’s no revelation to declare that golf is a corporate game. That’s not to say that the other major team sports haven’t become hyper-commercialized, from stadium naming rights to logos on jerseys to luxury suites to the “official” soft drink, bank or discount store.

Layer on the dimension not shared by other mass sports: Golf is a recreational game even more than a spectator sport. And it is a vehicle for transactions and developing relationships.

“Everybody is doing business out on the golf course,” said Hazeltine member F. Clayton Tyler, a Minneapolis lawyer. “You invite people out that you want to entertain, but you’re in their ear for four hours.”

The business of golf is business, which is why the current recession has so harshly affected the sport and why golf’s business climate reflects and reinforces the national business climate. Just last week Buick ended more than 50 years of PGA tour sponsorship, dropping tournaments in Michigan and California because of General Motors’ restructuring.

But Hazeltine and this tournament have done relatively well. 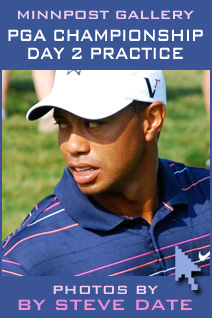 “Sure, we’ve been affected by the economy, who hasn’t?” said PGA tournament director Michael Belot. “But we’ve done better than average.”

The Minneapolis-St. Paul Business Journal reported recently that more than 100 companies have signed on at various rates. It speaks to the power of pro golf’s major tournaments and the unusual popularity of the game in Minnesota.

Golf’s popularity in Minnesota
Why is golf so popular here? Why do the state’s more than 500 golf courses generate, according to SRI International, the respected research organization, more than $535 million a year, or about as much revenue as the Twins, Vikings, Wild and Timberwolves combined? Lots of theories, just theories.

Weather. “Maybe it has something to do with the shortened golf season,” said tournament director Belot. It’s a theory proffered by a handful of experts. We live winterized for at least six months a year, so when we can get outside, we embrace the outdoors and the golf course. Starn noted that Sweden is among the world’s golf hot spots, too.

Minnesota nice? Hazeltine member Nathan Schuck began golfing just five years ago. He got the bug, had the dough, slapped down “more than $20,000, but less than a house” worth of money, and joined Hazeltine. (Actually, the current so-called “downstroke,” or membership entry fee, to join Hazeltine is about $42,000.) The web architect wasn’t very good. But early on, he was paired with one of Hazeltine’s top players. Schuck remembers shooting a 110 while his partner fired an excellent 74.

“I probably would have slapped me if I was him,” Schuck said, “but he was very patient. The whole Minnesota nice thing might have something to do with it.” If you stink, friends and playing mates don’t diss you.

Our demographic makeup. We are, still, relatively white and middle class for a sport that has financial and cultural barriers to entry. According to the National Golf Foundation, the states with the highest per capita golfers are Minnesota, Wisconsin, Iowa, Wyoming and Nebraska … not exactly hubs of diversity.

The Tiger effect
Hazeltine’s members of color can be counted on the fingers of your hands, and when Minneapolis lawyer F. Clayton Tyler joined Hazeltine in 1991, he was the lone African-American member.

With the PGA here, much of the popular attention will be directed towards Tiger Woods, the Thai-African-American-American-Indian-Chinese golf superstar. Oddly, despite Woods’ power and the published estimates that he pockets more than $100 million a year on endorsements and off-course fees, he is the lone PGA player with any African-American ancestry on the tour this year; and, according to Starn, there are no African-Americans on the minor league men’s Nationwide tour or any African-American women on the LPGA tour.

For all the talk of Woods’ effects on the game, what has changed?

Sure, he creates buzz, but “he is so non-interactive. He has this relationship with destiny, but he never gives anything to fans. There’s nothing quirky about him,” said Starn. Golf’s greatest player is its most corporate. Woods is the product of a middle-class family and — before he left to turn pro — a Stanford education. 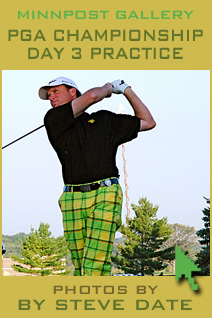 Many African-American pioneers on the PGA Tour, such as Charlie Sifford, Jim Dent and Calvin Peete, learned the game first as caddies. With the advent of golf carts, the caddie shack is a dying hub of development for young people not born into a golfing family. The path for minority players is more difficult.

It’s worth noting that Tyler, the Hazeltine member, has almost singlehandedly developed a superb caddie program for minority youngsters and that Hazeltine recently has been supportive of the Minnesota Minority Junior Golf Association. This year, Tyler had 110 boys and girls who wanted caddying positions, but only 70 spots were available.

As it happens, on Wednesday the PGA will honor 92-year-old William Powell at Minneapolis’ Pantages Theatre with its “Distinguished Service Award.” Powell is the only African-American to design, build, operate and own a U.S. golf course, in East Canton, Ohio.

Such is the backdrop for the first tee-offs of the PGA Championship at 7:15 Thursday morning. Aficionados will speak of Hazeltine’s length and difficulty. It’s likely some unknown will emerge for a day or two. Breathless story lines will be forced by mainstream media needing to fill space and time. The crowd will root for Tiger, even if he’s sure to disappoint anthropologist Starn. But there’s other intriguing news swirling.

Golf Digest’s Jaime Diaz reported the other day on a very hot politics-race-gender speculation story. Diaz suggested that even Augusta National, home to the Masters and that bastion of male (and one-time racial) supremacy, is set to admit its first female member.

The name floating around is former Secretary of State Condoleezza Rice.

If that’s not fodder for conversations this week about the meaning, politics and symbols of golf in America, then nothing is.