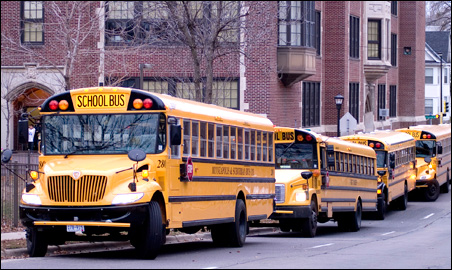 MinnPost photo by Bill Kelley
Buses outside Jefferson Elementary School in Minneapolis. This year nine districts, including Minneapolis, are legally starting school before Labor Day because they have construction or remodeling projects.

Talk about the late start for public schools this year is as widespread and predictable as the purple phlox now blooming in so many Minnesota yards.

Yet this year even some educators are complaining about the Sept. 8 school-start and asking a worthwhile question: Would starting schools before Labor Day improve students’ test scores?

That’s a key query given that so many Minnesota schools — like most across the nation — aren’t keeping pace with rising learning standards in the federal No Child Left Behind program. There’s slight improvement statewide in reading and math proficiency, but not enough.

That’s fodder for educators who wish the Legislature and the state’s tourism industry would butt out of the business of dictating school calendars. State law mandates schools start after Labor Day, the first Monday in September, for economic reasons.

Starting after Labor Day means fewer classroom days to prepare students for state and other standardized tests during the school year and that hurts efforts to make what educators call adequate yearly progress, says Greg Abbott , spokesman for the Minnesota School Boards Association, a group that lobbies for more local decision-making regarding school calendars.

“They lose a week, week and one half to get their kids up to standard,” said Abbott. “They may not hit all the content areas they need to hit by the time the test rolls around.”

Kids ‘more engaged’
Opening school doors in August would give students a leg up on prep for tests such as the Minnesota Comprehensive Assessments in April, as well as the Advanced Placement Tests and ACT college admissions tests for high school students, argued Redwood Area Schools superintendent Rick Ellingworth last week. He spoke from his office in the Minnesota River Valley town of Redwood Falls.

“We could capture as many as 10 high impact learning days when kids are ready to go to school. They’re more engaged this time of year than in late May or early June,” Ellingworth said, explaining a proposal his district serving about 1,200 students and 12 other districts in southwest Minnesota sent to the state Department of Education last spring.

The 13 districts asked for permission to start classes Aug. 24 under a flexible-learning-year-proposal exclusion in the law that mandates schools start after Labor Day.

The move also would have the 13 districts and their K-12 schools on a common calendar with area colleges, a help to 200 of their high school students enrolled in Post-Secondary Educational Options classes. Plus, it would have allowed more teacher-training collaboration and networking among teachers across districts.

The Department denied the request, though encouraging implementation of the collaborative efforts, Ellingworth said.

“We thought we could actually be the research,” Ellingworth said. “This is a good idea that isn’t going away.”

Taking a contrary position is Suzanne Kelly, interim superintendent for St. Paul Schools, the state’s diverse and second largest district with about 38,000 students. Start dates don’t matter if you hit the ground running, she says. “I’m hoping our classrooms and teachers are so engaging and students wanting to learn that we don’t lose any time learning” from day one, she said.

Also, learning continues in the district most of the summer through summer programs and camps, Kelly said.

Besides, starting school before Labor Day, which is also traditionally the last day of the mega Minnesota State Fair, poses a logistical problem for St. Paul schools. The district’s school buses are housed on Como Avenue near the fairgrounds and fair traffic would complicate getting kids to school on time.

Response to lobbyists
The after-Labor-Day start law was passed in the mid-1980s during a down economic time in response to pleas from resort owners and State Fair lobbyists. Starting school earlier would cut into family vacation time and reduce the number of young workers employed at resorts and at the fair, they pleaded, thus reducing income for business and workers. The law would boost struggling industries, according to that line of reasoning.

Abbott and the school boards he represents beg to differ. “We think local school boards have a better idea when they need to start school than the State Fair or resort owners,” Abbott said.

“It’s basically economic development versus educational local control,” said Jim Grathwol, lobbyist for Minneapolis public schools, where the doors open for classes Sept. 1 this year, allowable under a provision in the statute.

This year nine districts, including Minneapolis, are legally starting before Labor Day because they have construction or remodeling projects totaling $400,000 or more, an exemption provision in the law.

The exemption means that Fillmore Central district based in Preston and having 560 students in three schools will open its classroom doors on Aug. 24.

The early start date for that district 50 miles south of Rochester means the school year can end May 24, 2010, to give construction workers more summer time to complete a $1.9 million remodeling project at the middle school, according to Blaine Mow, building and grounds supervisor for the district. New boilers and ventilation units are being installed to increase energy efficiency.

St. Louis Park schools, too, are engaged in remodeling projects spread over two or three summers, said district spokeswoman Sara Thompson, and so qualify for exception.

Some legislators tried to change the school-start law last session.

DFL state Rep. Kim Norton of Rochester thought she had come up with a compromise bill when she suggested school districts be allowed to start before the Labor Day only if they “guaranteed” they’d give their pupils the Thursday and Friday before the holiday off. That would have allowed families with children extended Labor Day vacations.

The current economic recession was also a powerful argument for continuing the post Labor Day start.

Cynthia Boyd writes on education, health, social issues and other topics. She can be reached at cboyd[at minnpost[dot]com.

The Minnesota Department of Education says the following districts are starting the school year before Labor Day in compliance with the law.

Starting school before Labor Day: Would it raise test scores?