Editor’s note: This is part of an occasional series of stories about how the recession is playing out in Minnesota’s economy. Today we look at the tourism, travel and hospitality sector.

Such are the deals you can find in ads for Minnesota resorts this summer. They reflect the toll the recession is taking on the state’s tourism, travel and hospitality industry — a sector so crucial to the economy that it compares to agriculture in terms of total sales.

When final numbers are tallied, sales for this year likely will fall well below the $11 billion the state had come to expect from the industry. At best, they would remain flat, said John Edman, director of Explore Minnesota Tourism.

“Flat is the new up in this economy this year with the unemployment picture and everything else,” Edman said.

But Minnesota needs more than flat in order to bridge the fiscal chasm left this year by Gov. Tim Pawlenty and the Legislature. They kicked a $7 billion budget imbalance two years into the future, hoping a rebounding economy will send revenues soaring and save the state from financial disaster.

In the face of that gamble, MinnPost is examining Minnesota’s economy region by region and sector by sector. You can find the kickoff for the series here. This installment weighs prospects for tourism.

The quick take
Let’s start with a quick snapshot.

Corporate-sponsored trips — say, an executive retreat wrapping team training around golf and fishing — are way down. 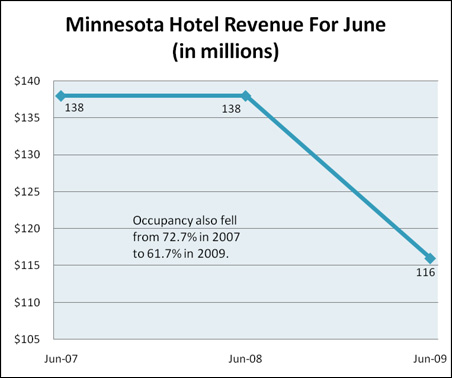 So are hotel stays. Smith Travel Research Inc., which tracks lodging nationwide, provided MinnPost with analysis showing that revenue at Minnesota hotels plunged this year. For June, the most recent month available, it was $116 million, down from $138 million a year earlier. Hotels slashed their rates. Still, just 61.7 percent of the rooms were occupied this June, down from some 70 percent in previous years.

With the summer months came steady traffic at small resorts with housekeeping cabins. But guests tended to tote in their own groceries and beer rather than spending money at restaurants and bars.

Higher-end resorts and hotels gave up a good share of their revenues to meet travelers’ demands for hard bargains.

In short, Minnesotans are vacationing this summer, even with unemployment approaching double digits.

No disaster to report in that regard.

“But the way they are traveling has really changed,” Edman said.

“Everybody is wanting a deal or a package,” said Gretchen Ennis, tourism director for the Brainerd Lakes Chamber of Commerce.

Through July, traffic at the Brainerd Chamber’s main visitor center has dipped only slightly — 24,488 visitors this year compared with 25,231 by July’s end last year. But the visitors who stopped to pick up maps and brochures wanted bargains, too, which translates into less revenue for state coffers.

And one question that has to worry the fiscal folks in St. Paul is whether this is long-term change or something we’ll forget in a hurry once recovery comes.

Big resorts and hotels
In the scenic Grand Rapids area, you find the full range of the recession’s impact on Minnesota’s travel mentality.

The recession stole as much as 15 percent of the group business at Sugar Lake Lodge south of Grand Rapids. This resort, in the Ruttgers family, features a conference center with an 18-hole golf course, a lakeside restaurant plus a bar and grill, a marina, a pool and fitness center as well as an inviting beach. 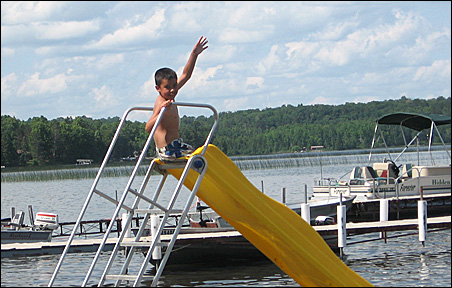 Photo courtesy of Hidden Haven Resort
Kids take to simple pleasures like playing at the beach.

“We have definitely seen a decline in our group business — corporate groups and others,” said Chad Simons, the sales director. “Most people in the industry, if they have a conference center, will tell you that.”

The lodge recovered some of its losses from travelers who opted not to take expensive cruises or European vacations this year.

“We saw family reunions and other social traveling spike quite a bit this summer,” Simons said. “Instead of flying to some extravagant destination, people are coming up north and getting away with their families.”

Bottom line: July was the best single month in the resort’s history. Still, sales for the year as a whole will fall behind last year.

‘Just OK’
The same was true at other high-end resorts.

“Our season has been just OK,” said Cathy Reichenbach, marketing director for Madden’s on Gull Lake near Brainerd.

“We are getting a lot of last-minute calls from people looking for deals,” she said. “When we have holes in our occupancy, we will put some great offers out there, hoping to fill them. I think all of the properties in the state have done that.”

The meeting business “is down a bit” at Madden’s, too, she said.

“I wouldn’t say this is a disastrous year, but we’re hoping for better next year,” she said.

The big resorts and hotels will have to wait to see what comes their way next year because many groups have stopped making long-term reservations.

Bookings at Carlson Wagonlit Travel in Plymouth typically are running about three weeks in advance, said Belinda Muehlbauer, the meeting and events director for the region.

Corporations, in particular, “are skittish about wanting to enter into a contract that they may not be able to fulfill and then get hit with cancellation costs,” she said.

“The term ‘resort’ is getting hit hard,” Muehlbauer said.

To get around the sensitivity, some resorts have dropped the term from brochures and documents they use for corporate sales.

But caution is more than cosmetic for many companies. They are opting for genuine austerity, holding meetings in their headquarters offices and scaling back on the fun that enhances camaraderie.

“We’re noticing the meetings are not including activities such as golf,” she said. “They are leaving it up to attendees to do that on personal time if they so choose.”

‘Ma and Pa’ resorts
Back in the Grand Rapids region, the 13 cabins at Hidden Haven Resort on Bass Lake have been full for weeks.

“We’re up over last year in terms of occupancy and also in terms of revenue,” said Bob Barton, whose family bought the resort three years ago. 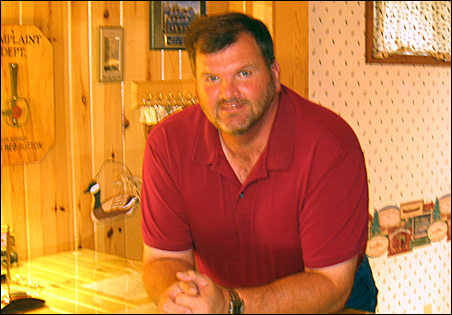 A stay at Hidden Haven is your classic housekeeping vacation. No restaurant. No bar. No airport shuttle, because there is no nearby airport. Families come for the sandy beach, boating, wooded hiking trails, lawn games and lunkers some lucky anglers pull from the lake.

What’s true at Hidden Haven is true at other small resorts across Minnesota.

“Our numbers are going to be pretty consistent with last year,” said Tom Kavanaugh of Kavanaugh’s Sylvan Lake Resort near Brainerd.

Spending in a different way
It’s a throwback to a time before families could afford to fly to Europe or Disney World for summer vacations. The state can hope it signals that Minnesotans are boosting their own economy by spending their vacation dollars at home.

But bargain hunting is the bigger trend this year, said Dawn Duffy of AAA in Minneapolis. Those who normally would vacation in the region are taking shorter, cheaper trips.

“They are packing a cooler instead of eating out,” Duffy said. “They are staying with friends or staying at an economy hotel. … They still are getting away from the daily grind, but it’s different.”

In Duluth, the difference shows up at free and bargain attractions. Campgrounds are crowded while hotels have more vacant rooms than last year, said Gene Shaw of the Duluth Tourism Bureau. The admission-free Lake Superior Maritime Museum is on pace to beat last year’s attendance. And the chance to watch ore boats and “salties” pass under the Aerial Lift Bridge is as popular as ever.

“Almost all of our attractions are up,” Shaw said. “There are a lot of things for people to do here that don’t cost them an extra dollar.”

Explore Minnesota sees the trend in attendance at state parks and campgrounds.

“People are flocking to the parks, and they are camping much more,” Edman said. “Festivals and events are way up too.”

(Personal note: This particular austerity measure doesn’t work for me. I swear that every walleye I ever caught cost at least $80 a pound after I factored in all of my lost tackle, etc.)

Bargains and jobs
All of this is not to say Hidden Haven’s season has been carefree. Bargain hunters pressed hard on Barton as they did on resort owners statewide.

Although most of Hidden Haven’s customers come from the Twin Cities, it does count on some business from the surrounding region. And the region is hurting. Unemployment shot into double-digits after the recession hit nearby mines and forest-product operations. 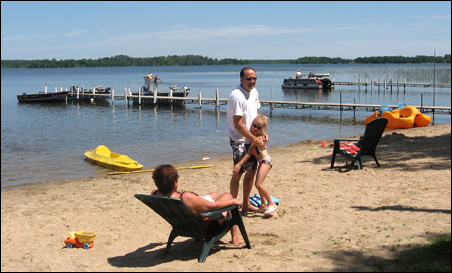 More than 100 people applied last spring for the 20 seasonal jobs at Hidden Haven, Barton said. Typically, a worker starts at $10 an hour, but Barton promises a bonus to those who show up faithfully during the high season, adding $2 to their hourly pay.

“Tourism is economic development up here,” Barton said. “These are folks that otherwise wouldn’t have a job this year. … The tourism business is so important to the local economies because we take the peaks and valleys out of the other stuff.”

Counties depend heavily on tourism
Indeed, some northern Minnesota counties count on tourism for a hefty chunk of their gross sales, according to a report by Nate Dorr, a regional analyst for the Minnesota Department of Employment and Economic Development.

In Lake of the Woods County, a whopping 26.7 percent of gross sales come from tourism, Dorr said. In some other counties, the tally is closer to 6 percent.

The bottom-line significance for Minnesota is that tourism accounts for 15 percent of the statewide sales-tax revenues and nearly 11 percent of the private-sector jobs.

The significance is not lost on Edman at Explore Minnesota.

“I can’t tell you or anybody else that the situation is rosy, but I’m telling you honestly what I’m hearing so everybody understands what’s going on,” he said.

Part of the suspense will be whether the new bent for bargain travel endures for years to come.

“There are a lot of great things you can do here in Minnesota to give you that escape that you need while also promoting the idea of values — connecting with your friends, with your family, with your grandparents,” Edman said. “We may have to slow down and think about what tourism can offer people beyond just the dollar and cents.”