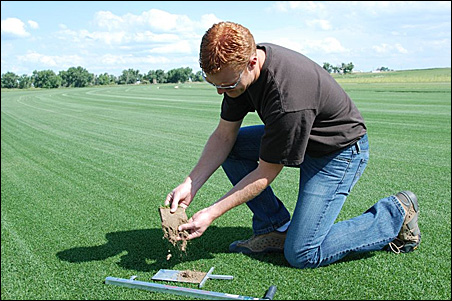 It’s 10 p.m. Monday, and Dave Bockelman is driving a semi through the streets of Minneapolis carrying the load of his life.

Nearly 15 hours earlier, he and fellow driver David Jorgensen left Graff’s Turf Farms in Fort Morgan, Colo., on a virtually nonstop, 830-mile journey in the first of the refrigerated trucks heading to Target Field. Through Thursday, each of the estimated 19 trucks will deliver about 6,000 square feet of special sod that will help bring outdoor Twins baseball back to Minnesota.

As a former Minnesotan and life-long Twins fan, I’m proud to share some of the behind-the-scenes efforts by hundreds of workers here and in Colorado, all helping Target Field groundskeeper Larry DiVito to meet his goal of having the field “game-ready” by Nov. 1, before the grass goes dormant for winter.

As a horticulturist now with Colorado State University Extension, I had the opportunity to visit Graff’s farm in May to see the more than 2 acres of Twins sod. Then, last night, I was on hand for the first shipment’s arrival and got to share in the excitement workers and team officials were experiencing at the landmark event in preparations for the stadium’s debut next season.

Upon entering the construction site, I was awed by the grandeur of the stadium. With wires snaking across the floors and tools everywhere, I wound my way to the third-base side, where workers began laying the sod about 10:20 pm. Anticipation was high, and when the first sod roll came onto the field, one crew member remarked, “The eagle has landed,” while another joked, “Only 844 rolls to go.” (Actually, the total is likely to be closer to 320 rolls.)

After the Donkey forklift laid the first roll, many of the onlookers clapped.  “This [the turf] will make it a ballpark,” Twins General Manager Bill Smith told me during our brief conversation. 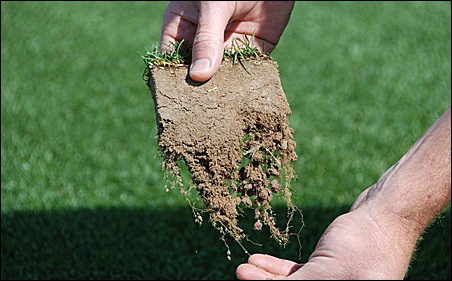 MinnPost photo by Carol O’Meara
The sports turf’s deep roots will help it develop quickly before going dormant this winter.

Many diehard Twins fans have longed for a return to outdoor Twins baseball ever since the team left its first home, Metropolitan Stadium, to begin play in the Hubert H. Humphrey Metrodome in 1982. When I was 7, my mom let me stay up late to watch the Twins win the 1987 World Series, so you can see that the Metrodome was the only Twins home I remember.

I’m a big Twins fan, but I can’t compete with the numerous loyal supporters who actually went out of their way to stop by the Colorado sod farm in hopes of getting a firsthand glimpse of the Twins-bound sod.

James Graff, co-owner of Graff’s Turf Farms, said he had many requests from Twins fans wanting a tour of his farm and did his best to honor those when he could. The requests to see the Twins sod were a first for him, he said. Even when Graff’s grew the sod for the nearby Colorado Rockies’ Coors Field, he never had fans wanting a sneak peek at the grass.

The logistics
Like successful baseball, the sod project has taken plenty of teamwork and preparation among the Twins, Graff’s and Fortune Transportation, the Windom, Minn., company chosen to handle the delicate transport.

While Monday was a big day for Twins fans, it was just another day for Graff’s, which also cut sod for Notre Dame University’s soccer field and Rio Tinto Stadium in Salt Lake City, Utah.

From the time the sod cutter entered the turf field at 4 a.m., the clock was ticking. Contract specifications state that the sod must be cut and laid within 24 hours. To fulfill that commitment, the trucks’ arrival times are spaced out over four days, with installation expected to be complete on Thursday. Individual trucks will carry sod in 300-square-foot rolls, each measuring 4 feet by about 75 feet.

The four-day installation window allows adequate time to ensure the sod is laid to DiVito and Graff’s specifications. The workers install the turf at night because it is cooler and less stressful for the sod. Because the stadium lights aren’t yet operational, the crews used four sets of portable lights as they work to make sure seams between sod rolls are snug. Graff also added lights to his forklifts to reduce field shadows, allowing him to check every seam and to examine the quality of each roll as it’s installed. 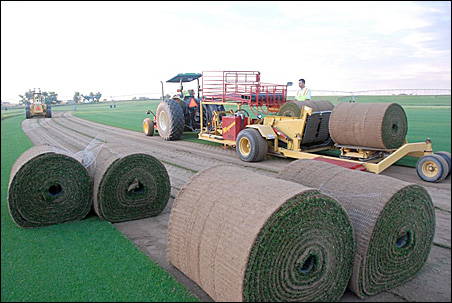 Installation began Monday in the outfield, along the third-base foul line, working toward center field. The edges of each roll are overlapped and then a cut is made through both pieces, ensuring a tight seam between each roll. The sod then knits together in a block-type fashion.

Throughout the process, DiVito has been very specific about what he wants.  As Graff notes, “In the end, my customer is Larry DiVito.”  The cost of the sod runs about $100,000, about half of the cost covering freight.  The entire playing surface cost is $3 million, a small percentage of the entire stadium cost of $525 million.

“[The sod is] “a minuscule part of what it costs to put in a ballpark, but it’s like frosting on the cake,” says  Randy Graff, founder of Graff’s and former owner. “Everybody loves to see the grass go in.”

Although Graff’s had not worked with Fortune Transportation before, the owners have been  impressed with the level of preparation made by a company that usually hauls ice cream and beer. Fortune management flew to Fort Morgan to scout rest areas, fueling sites and the loading location. Fortune’s is using refrigerated trucks keep the sod at 40 degrees during the trip.  Because of the 24-hour time restriction from “field to field,” the company is using teams of drivers who can switch off shifts to stay on schedule and comply with transportation rules.

Twins fever is running high in Windom, and the transport company reports it had no problems recruiting employees to team up for the long hauls. Expectations are high, and Jorgensen is determined to deliver. As the 2007 Minnesota Truck Driver of the Year, he was selected to drive the lead truck.

The special sod
So why use a Colorado company to supply the sod for a Minnesota stadium?  It comes down to the soil.

Located on a frontage road off of busy Colorado Highway 34, the farm has ideal soil for growing sod. The operation encompasses the old river bottom of the South Platte River, where the soil is over 90 percent sand. 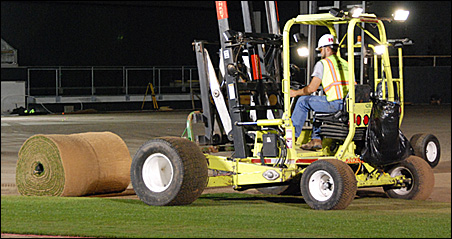 Tender roots can stretch to 10 inches in the sandy soil, allowing an easy transition to a stadium setting because Target Field is constructed on a sand base for drainage.  Graff’s native soil is nearly identical to that in Target Field. The sand resists compaction and drains well — a perfect combination for high-performance sod.

At the farm, Graff’s sod is mowed every other day at five-eighths of an inch. That height promotes new shoots and encourages root development, producing a dense mat of sod that is perfect for a sports field. The Twins’ sod is a four-way blend of Kentucky bluegrass, each variety selected for durability, wear tolerance and color. Graff’s seeded the Twins turf one year ago, making it now the ideal age for sod that will be used for sports turf.  The young sod will begin rooting within days of being laid.

The farm
Graff’s Turf Farms, co-owned by James Graff and Marty Thiel, is known as one of the top farms in the country for producing high-performance sports turf. In 1979, Randy and Betsy Graff started the enterprise as a 60-acre turf farm. Graff’s now has the capacity to grow 440 acres of turf.  Colorado is the seventh-largest sod producer in the United States (California is first; Minnesota is 20th), according to the 2007 Census of Agriculture.  Graff’s also supplies sod for commercial and residential areas, the majority of its business.

When Graff’s began growing sod, professional sports turf management was in its infancy as a profession. But during the1990s, the profession flourished when players became more expensive.  Concerns about field safety and better drainage surfaced.

“The level of experience of sports turf managers in the last 10 to 15 years has exponentially increased,” says my colleague, Dr. Tony Koski, a Colorado State University Extension turf specialist who consults with Graff’s. “The money invested in athletes demands a field quality that sports turf managers provide. The appearance of the field is least important; the most important facet is the safety of the field.”

Randy and Betsy’s son, James, and longtime employee Thiel bought the company in 2007.  James Graff handles sales, and Thiel is the production manager.  A small operation of 15 employees, Graff’s has provided sod for sports facilities throughout Colorado and beyond. 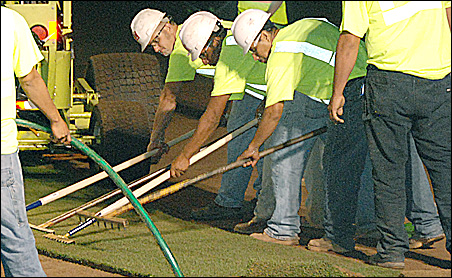 In 1994, Graff’s got its start in the sport turf business by supplying sod for Soldier Field in Chicago for the World Cup of Soccer. Randy Graff was approached about providing the sod, and was interested but concerned about the logistical challenges.  With Chicago more than 900 miles from Fort Morgan, there was the issue of keeping the sod fresh during transport. In the end, managers of Soldier Field offered to harvest and transport the turf.

The next bid came from Coors Field, one of the first baseball stadiums with a heating system and proper drainage.  Koski calls the Rockies’ stadium “the Cadillac of ball fields.”

Graff’s regularly bids with three or four other turf farms for stadium projects across the country.

This week, all of Graff’s expertise in turf handling is unrolling for the public to see. In less than seven months, Joe Mauer, Justin Morneau and their teammates will leave their imprints for real in the new sod.

Although I probably won’t be in Minnesota on opening day, April 12, you can bet I’ll be cheering on my home team, seeing how many grass stains the players get on their clean uniforms.  And I’ll be watching ESPN to catch a glimpse of the new field.