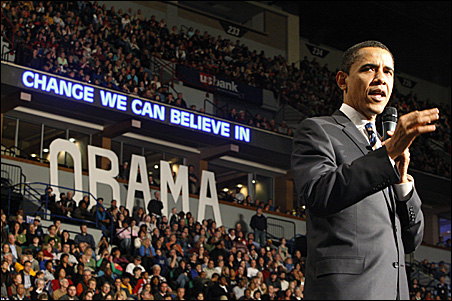 REUTERS/Jason Reed
On Saturday, President Obama will return to Target Center, the scene here of a February 2008 campaign rally that drew an overflow crowd.

On June 29, 2007, Democratic presidential candidate Barack Obama came to Minnesota to kick off his campaign in the state. The event was held at the International Market Square.

“The cardinal rule in politics is always fill the space so it looks crowded on television,” said Minneapolis Mayor R.T. Rybak, an early Obama supporter and one of many working to ensure a big turnout for the president’s return visit Saturday to Target Center.

International Market Square is an ideal venue, the mayor explained, because there are many levels. If there’s only a small crowd, organizers only allow people on the first floor to make it look crowded.

On that first Obama visit, the people kept coming and coming and tier after tier at the building was filled.

“It was electric,” recalled Rybak.

“I was concerned he couldn’t fill it [the Target Center],” the mayor recalled. “I suggested the auditorium at Augsburg.”

The Obama campaign apparently had loftier visions. Rybak said OK, but had a Plan B in mind.

“I knew that the Target Center had come up with a way to cut the building in half, you know for smaller concerts and things like that,” Rybak said. “I thought that’s what we might have to do.  Well, of course, as the event got closer, you could just feel the buzz. It turned out to be a political Woodstock. I remember coming early and seeing the lines and lines of people waiting to get in.”

Rybak also recalled a brief conversation with the candidate.

And, of course, Obama proclaimed his victory in the long campaign for the nomination to an overflow crowd at St. Paul’s Xcel Energy Center on June 3, 2008.

Now, he returns, as part of another brutal campaign. The campaign for substantive health care reform.

Rybak confident about Saturday rally
Rybak has no concerns about the greeting President Obama will receive.

“We [Obama supporters] will show up,” Rybak said. “We’ll do it again. There will be a lot of people, a lot of noise. We outnumber the people who have fought change — and we have a chance to show that. We’ve had a very small group of people present a lot of misinformation and make a lot of noise. Anybody mad about this junk that’s gone on this summer should show up.” 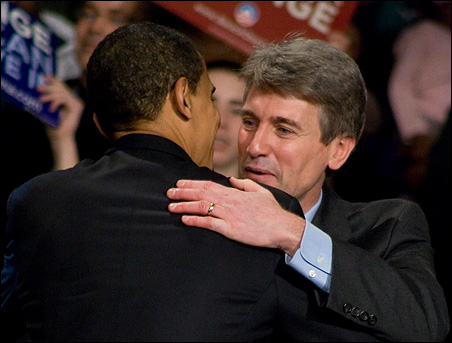 To ensure that he’s doing his part, Rybak urged “my 6,000 Facebook friends” to attend. He’s also buttonholing everyone he sees when he’s walking down his city’s streets to make sure they show up Saturday.

Rybak’s not alone in pushing Obama supporters to attend. The DFL is contacting its loyalists, as is Organizing for America, the Obama-inspired post-election organization, which sent out emails urging people to show up very early. (The event is at 12:30 p.m., doors open at 9:30 a.m.)

“He’s under attack by Washington insiders, insurance companies and well-financed special interests who don’t go a day without spreading lies and stirring up fear,” wrote Jenn Brown, the Organizing for America state director for that organization’s volunteers. “We need to show that we’re sick and tired of it and that we’re ready for real change this year.”

What will the mayor say if the president turns to him and asks, “Are we going to win this thing?”

And he’s convinced that the wildly enthusiastic reception the president will receive Saturday will help change the tone of the debate.

Obama critics ready, too
Of course, others beg to differ.

Toni Backdahl is the president of the Minnesota chapter of the Tea Party Patriots, a conservative group that opposes  a “government takeover” of health insurance.  Although many observers believe that the president chose Minnesota for this campaign-style event because of its relatively progressive health care system and because it always has embraced him, Backdahl sees it differently.

“We must be doing a good job in Minnesota to make him come all the way out here,” Backdahl said.

Despite the fact that these are very busy times for the Tea Party people, she believes they will have a substantial number of people at the Target Center Saturday and will join with other groups that also oppose the president.

Backdahl won’t be able to attend. She and at least 30 other Tea Party folks have chartered a bus for the big 9-12 Day bash in Washington, D.C. on Saturday.

Digression here: Unless you’re on the political right, you may not know of the significance of 9-12. I didn’t, so Backdahl patiently explained.

It seems that Glenn Beck, a conservative-talk media guy and author, decided that 9-12 should be significant because in his view (video clip below), there are nine conservative principles and 12 values, thus there should be a gathering in D.C. on 9-12. A number of conservative organizations are promoting this event and have hopes of attracting 500,000 people to the nation’s capital.

Anyhow, 30 of those folks will be rolling in on a bus from Minnesota late tonight. Additionally, a number of Tea Party members — they claim to have about 3,000 members in Minnesota — and other groups opposing reform, will be at a Saturday town hall meeting cheering U.S. Rep. Michele Bachmann in St. Cloud.

Still, Backdahl believes that a substantial number will show up at Target Center to voice displeasure over the Obama plan.

“We all know there needs to be reform,” Backdahl said. “Many of us have had awful situations with health care. But many of us feel we’re being lied to.”

So outside the Target Center, there’s likely to be some debating going on among those who support the president and those who don’t trust him.

“Fortunately, we’re used to this,” said Sgt. Jesse Garcia, spokesman for the Minneapolis police department. “When Bill Clinton was president, he came here frequently. We have sort of a template for handling these situations.”

Much has been made of the fact that the Obama program at the Target Center starts shortly after the Twins are to play the Oakland A’s at the Metrodome and a few hours before the University of Minnesota football team is to open its brand-new stadium on campus.

That seems like a whole lot of people moving around in a fairly small area.

But Garcia said that traffic for all of these events pales in comparison to the typical rush hour traffic that the city deals with every weekday.  When presidents make weekday appearances — as Clinton frequently did — then, there are headaches because routes from the airport to downtown have to be closed to make way for a presidential motorcade just when people are trying to get to, or leave, work.

“This shouldn’t be any different than a Saturday afternoon concert,” said Garcia, “except you won’t have to deal with so many drunken people or indiscriminate drug use.”

What will the reception for the president be like?

Pawlenty low-key, welcoming
Given the tone set by Gov. Tim Pawlenty at a Thursday afternoon media briefing on the wonders of health care in Minnesota, even the foes of reform may be quite civil. Pawlenty went out of his way to avoid any sort of inflammatory rhetoric.

“We welcome his visit,” the governor said, adding that the president could learn a lot about reform by looking at the Pawlenty administration’s work in that area.

Over and over, Pawlenty seemed to go out of his way to be careful with his rhetoric.

“This is an important debate,” he said. “The issues need to be addressed.”

It almost seemed as if the “You lie!” outburst blurted out by South Carolina Rep. Joe Wilson in the midst of the president’s speech Wednesday night — served to pour cold water on some of the hot rhetoric.

“Inappropriate and unfortunate,” said Pawlenty of the Wilson outburst. “There has to be a degree of respect. Applause is appropriate, silence is appropriate. Heckling is not.”

As if responding to complaints that the Republicans are merely saying “no” to reform, Pawlenty laid out 10 things that constitute Pawlenty’s view of reform in Minnesota.

1. Recognize that the current publicly subsidized system can’t be sustained no matter “how well intentioned.”

2. Pay for outcomes, not quantity of tests.

4. Set up a system of “401ks for health care [because] it puts consumers in charge.”

7. Use market principles to hold down costs. If a consumer chooses to go to high-cost facilities, that consumer pays more.

8. Engage the private sector as a partner, not an opponent.

9. Require reporting of medical errors and don’t pay when errors are made.

10. Prohibit insurance companies from denying coverage to those with pre-existing conditions.

The point he kept coming back to was cost.

“We need to focus on cost and quality as much as expanding access,” said Pawlenty, adding that most Americans are happy with their care but fearful of the ever-growing expense.

But through all of this, Pawlenty’s voice was soft. There was little of the overt sarcasm that so often comes out when speaking of Democrats.

Pro-reform side ready to rally
Likely, the voices won’t be so soft on Saturday at an event being billed as a rally. After an August filled with taking lumps, the pro-reform crowd is coming back swinging.

“When the president spoke [Wednesday] I could almost feel a collective stiffening of the spine,” said Rybak. “I could just feel it.”

Rybak was so pumped up Thursday that he was urging people to make a day of it in Minneapolis. Go to the rally, have a meal, go to the Gophers’ game, come back to downtown to party.

Restaurant owners near the Target Center share the mayor’s enthusiasm for the big event.

Stein’s not saying where he stands on reform. All are welcome at his establishment — even the president.

“I understand he’s a fan of chili,” said Stein. “We’re known for our chili. It would be real good if he wants to stop.”