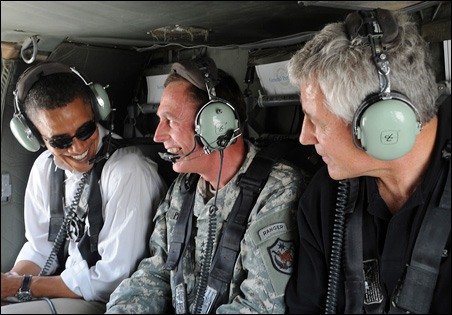 “I wish someone had told me when I was sitting on a burning tank in a Vietnamese rice paddy that I was fighting for a lost cause just to save a president’s legacy.” — Chuck Hagel, “America Our Next Chapter” (2008).

Chuck Hagel, two-term senator from Nebraska is coming to Minnesota, and there’s a bit of irony behind this story.

A combat veteran who served in the most deadly years of the Vietnam War and later a staunch defender of the war against its critics, Hagel comes to Minnesota at the invitation of the center dedicated to a Minnesota senator whose name was a synonym for opposition to the Vietnam War. On Wednesday evening, Hagel will deliver the annual lecture of the Eugene J. McCarthy Center of the College of St. Benedict and Saint John’s University.

The Republican Hagel and Democrat McCarthy have at least one political trait in common. Both dared to stand alone challenging their respective political parties and an incumbent president of their own party over a failed war — Vietnam, for McCarthy; Iraq, for Hagel. Although he is likely to draw more Democrats than Republicans to his talk, both would hear from Hagel a voice they have almost forgotten: a Midwestern Republican with feet planted firmly in the center of American politics.

If you have any doubts about the Republican right’s attitude toward Hagel and his views on the war in Iraq, tune in to Rush Limbaugh, who refers to him as “Senator Betrayus.” (Limbaugh coined the phrase to discredit Hagel, by the way, well before MoveOn.org used it for Gen. David Petraeus.)

You might say I’m too sensitive, but I am quick to take offense at the national media’s tendency to slight the Midwest. This past Sunday, I detected this tone in a piece by the New York Times’ David Segal.

Driving across Nebraska, Segal gave the impression that the voice of Nebraska was nothing other than a chorus of conservative radio talk shows. Apparently, Segal’s Nebraska is the ground zero of the Glenn Beck-Sean Hannity-Rush Limbaugh axis of rage on the right. “Hour after hour, rant after rant,” he wrote, “it is a feast of words and feverish emotions, interrupted only by regular commercials and the occasional call from the awestruck fan.”

As it happened, last week I was listening to a much different voice from Nebraska. Last Friday, Hagel took time out for a telephone interview with me on foreign policy. Hagel can pack enough knowledge and expertise into a few minutes of conversation about foreign policy to qualify for tenure as a professor of international relations.

Modesty and candor
Yet there’s a tone in his voice that makes you believe you are part of conversations in the Sand Hill region of the Nebraska of his youth and convinces you that his first audience always was and will be the folks back in his hometown of Ainsworth. Hagel displays a modesty, candor and willingness to listen that it about as far away from right-wing talk radio as a conversation can get — and at least as far away as Ainsworth is from Fox News studios in Washington, D.C., or New York.

There is another part of Hagel’s biography that is never far below the surface in his conversation and writing. In 1967-1968, he served in the U.S. Army infantry in Vietnam during the Tet offensive. Patriotic Nebraska boys, he and his younger brother, Tom, volunteered, served together side by side. They saw each other near-fatally wounded, and each at one time had to treat the wounds of the other. They brought home five Purple Hearts, somehow got out of Vietnam alive, went on to live very different lives, and came to disagree sharply with each other on the war. The story of the Hagel brothers’ war and the post-war years forms the most unforgettable section of Myra MacPherson’s “Long Time Passing Vietnam & the Haunted Generation” (1985).

Unlike his brother Tom, who became a war protestor and political dissident on the left, Chuck became a conservative, successful entrepreneur and defender of the Vietnam War.

He held that view for decades until he could not deny the evidence that he had been duped by his government. In 1997 he heard a tape recording. NPR broadcast a tape from a 1964 conversation between President Lyndon B. Johnson and Sen. Richard Russell of Georgia. LBJ admits that he can’t see a way in which the war could be won. Yet he’s not about to accept the political fallout for being the first U.S. president to lose of war.

In Hagel’s recent writings and his public talks, he returns often to the Johnson/Russell conversations.

“The duplicity and dishonesty,” Hagel explained to me, “that I heard in these tapes has affected me to this day and prove the lesson of Vietnam: You must have honesty and you cannot bog down great armies in complicated parts of the world that you don’t’ understand.”

The lesson was not learned. Three years ago, Hagel called the Bush administration’s war in Iraq “an arrogant self-delusion reminiscent of Vietnam.”

At best, he envisions a situation in Iraq now that offers us only the possibility of “an honorable withdrawal.”

First of all, this requires recognition that our policy toward the Iraq war is “not a partisan debate,” he said. Republicans have to accept that there is no military solution. Democrats have to accept that perhaps as many as 20,000 U.S. troops will remain in Iraq indefinitely.

Second, he said, an international approach must replace the unilateral approach of the Bush years.  This approach, moreover, may require a role for the UN as a mediator along the fault lines of the Iraqi conflict — the tensions between the government in Baghdad and the Kurdish region in the north, the Sunni Shiite divide and conflicts of the sharing of oil and hydrocarbon-fuel revenues.

Third, Hael suggested, we should try a little more humility in our goals. “We must accept that every policy is going to be flawed,” he warns, “and that extremism and terrorism is never, never going to be fixed.”

Problems with Iran
Hagel is too modest to predict the long-term future of Iraq. He’s inclined to believe the predictions of a few of Iraq’s neighbors, which they share in private, if not in public. “Most likely,” he suggests passing along their views, “we will end up with an Iraqi strongman who may or may not be pro-Western.”

If the war in Iraq was the greatest catastrophe in the history of recent U.S. foreign policy, Hagel suggests that our policy — or our lack of a policy — toward Iran may be a far greater catastrophe waiting to happen in the near future.

My first mention in our conversation of Iran immediately prompted Hagel to say that “engagement is not appeasement.” In one sentence, he turned the logic of the Bush administration policy toward Iran on its head.

His specific recommendations read like a clear, crisp and brief memo: 1) The U.S. must continue to work with the U.N. Security Council to keep up the pressure on Iran on the nuclear issue; 2) The U.S. “should offer a wide-ranging diplomatic agenda for bilateral negotiations with Iran”; 3) The U.S. needs to recognize that Iran has a role to play in the Persian Gulf and our policy must involve Iran’s neighbors in the region. Finally, we need to remember that even the best of policies can fail and “containment and confrontation” may be our last and final resort.

There’s a clarity and a healthy dose of Midwestern common sense to Hagel’s ideas. There’s also a problem. As former GOP Sen. Dave Durenberger explained, “Hagel’s problem is there is so little center left in the Washington politics of the 21st century.” It’s not just his problem. It’s our problem.

You would probably not be surprised if I told you that my politics belong to what our late Sen. Paul Wellstone called the “democratic wing of the Democratic Party.” Yet I have watched politics long enough to admit my politics often hinted of arrogance. The other side was right on a few things, and, above all else, we can all take pride that once upon a time there was a streak in Midwestern Republicans that produced Minnesota’s Dave Durenberger and Gov. Arne Carlson and Nebraska’s Chuck Hagel.

Unfortunately, the Nebraska Republican will probably be greeted this Wednesday when he arrives to speak in the heart of Rep. Michele Bachmann’s congressional district by protests from his fellow Republicans carrying signs against “Senator Betrayus.”