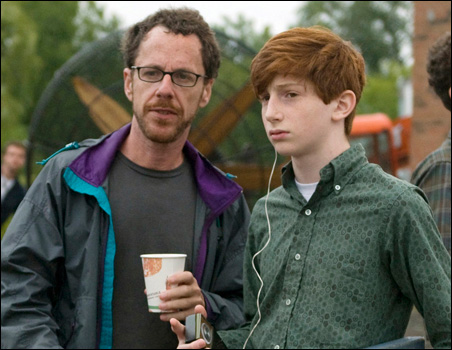 TORONTO — “I’m sorry you asked that question,” the elder Coen brother tells me during a roundtable interview to promote the siblings’ new movie, “A Serious Man.”

Seriously? Regarding the Coens’ ultra-rare dialogue at Walker Art Center tonight, I only wanted to know what it’s like for the legendarily tight-lipped natives of St. Louis Park to have to reflect on their quarter-century of filmmaking in a public forum.

“It’s horrifying, frankly,” says Joel, deadpan as ever. “We don’t engage in a lot of reflection about our 25 years of making movies. Ordinarily we don’t like to do those kinds of [dialogues]. We’re doing it for the Walker because it’s a hometown thing and because we got an unbelievable amount of support from the community in Minneapolis when we were making [“A Serious Man”]. It’s not something we really like. It’s not really even desirable. But we’re doing it this time.”

Um, get your tickets now?

Alas, no. Even at $45 apiece, or $100 with a reception invite (Jerry Lundegaard of “Fargo” would need another get-rich-quick scheme), tickets sold out in a hurry when they were offered to Walker members last month.

But “A Serious Man” — the Coens’ 14th feature, which had its world premiere at the Toronto International Film Festival recently — can be seen locally just a week from now, when it opens at the Uptown Theatre. And the other 13, from “Blood Simple” (1984) to “Burn After Reading” (2008), are in the Walker’s Coen brothers retrospective, “Raising Cain,” which runs through Oct. 17.

Getting ‘Serious’ is simple
Set mostly in St. Louis Park circa 1967, “A Serious Man” begins with a printed quotation from Rashi, an 11th-century French rabbi: “Receive with simplicity everything that happens to you.”

And what, then, is the simplest way to receive “A Serious Man”?

That’s easy. I’d say it’s about the Coen brothers — collectively embodied in a Jewish teenager named Danny Gopnik (Aaron Wolff) — and how they found their religion not in Hebrew school, but in the likes of “F Troop” and Jefferson Airplane.

Not that the brothers themselves would agree that the film is autobiographical. 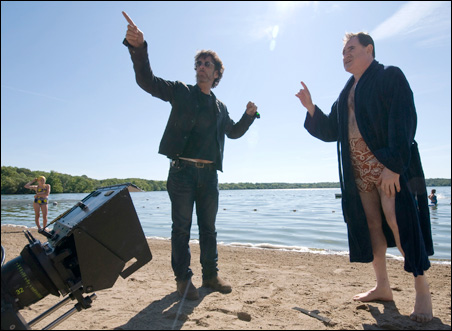 Joel: “It’s semi-autobiographical, I guess you could say, in the sense that the story takes place in a community very much like the one that we grew up in — Minnesota in 1967. And also there are a couple of very superficial similarities to our family — [Danny’s] father is an academic, and our father was a university professor. But [our father] wasn’t really anything like the character in the movie, and the story is made up and doesn’t really have anything to do with anything that happened in our family.”

When pressed, Joel — who favors futzing with his Adam’s apple, while Ethan attends to a fingernail — does admit that he and his younger brother “were big ‘F Troop’ fans.”

Saddling up with the Dude?
On the subject of what the brothers were digging so long ago, I ask whether the 1969 Western “True Grit”  — reportedly slated for the Coens’ “reimagining,” with “El Duderino” Jeff Bridges in talks for the John Wayne role — was a movie on their teenage radar.

Ethan: “Actually, yeah, we did see it as kids. It made very little impression on us. Subsequently, we both read the book [on which the movie is based], and the book made a huge impression. I guess [the book is] kind of why we’re interested in doing [our version].”

Joel: “Would our movie be a ‘remake’? The other day we were trying to figure out what you’d call it.”

Ethan: “I mean, if we did an adaptation of the Bible, would that be a ‘remake’ by virtue of the fact that the Bible has been made into other movies?”

Hmmm. For the secular Coens, “True Grit” is the classic “good book” — but maybe everything does go back to the Bible after all.

More roundtable quotes from the Coens

On making the Minnesota of 2008 look like the Minnesota of 1967: “Those [suburban] developments of the late ’50s and early ’60s remain quite pristine,” says Joel, “so about half [of what’s in the film] is just as it exists now. But [the neighborhoods are] full of old-growth trees now, so almost all of those [trees] were removed by computer.”

On what Ethan, in the “Serious Man” press kit, calls “the whole incongruity of Jews in the Midwest”: “To us,” says Ethan, “the [flat Midwestern] landscape with Jews on it is funny, you know? Maybe this is part of why we put in that little story [set in a shtetl] at the beginning of the movie, to kind of frame it. You look at a shtetl, and you go, ‘Right — Jews in a shtetl.’ And then you look at the prairie in Minnesota and you kind of think — or we kind of think, with some perspective on it, having moved out, ‘What are we doing there?’ It just seems odd.” Joel: “Mel Brooks once had a song called ‘Jews in Space.’ I guess that’s sort of the idea.”

The trailer for “A Serious Man.”

On how “A Serious Man” may be perceived by Jews: “That actually is something we’re very curious about — how [the movie] translates outside its obvious constituency,” says Joel. “[The reaction so far] has been pretty encouraging, I have to say.”

Ethan: “We weren’t worried [making the film], because these things take care of themselves, but we were curious about whether there’d be hostility [toward it]. Jews who’ve seen it — including religious Jews — have been surprisingly open to it. I guess one’s concern is that a lot of Jews see things through the prism of, ‘Is this good for the Jews?’ ” Joel: “We haven’t encountered any negative pushback. In fact, it has been just the opposite, which is very gratifying. [The film] was made as an affectionate representation of something we were very familiar with. So we’ll see.”

On whether it has gotten easier to make movies over the course of the last 25 years: “I actually think it feels the same,” says Joel, “except in the respect that recently — over the past eight or 10 years or maybe less, because we’ve been working with the same people for a while — it seems like we have a very efficient production machine. I know it didn’t feel that way when we were starting out.”

Ethan: “That’s true. Production doesn’t feel as daunting now. But the process [of filmmaking] is always a weird thing. It’s still just as hard to get your mind around attacking the problem of how you’re going to do stuff in some basic way, you know what I mean?”

Rob Nelson, a member of the National Society of Film Critics, writes about movies.