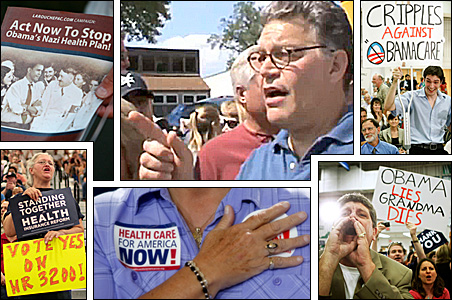 Despite all the fuss over the summer’s volatile town hall meetings and the swirling images of angry interest groups and fist-pumping citizens, Minnesota lawmakers return to the nation’s capital with largely the same positions on the controversial legislation that they left with.

“I don’t think the August recess has changed anyone’s minds,” said University of Minnesota  political science expert Larry Jacobs. “Despite all the breathless commentary, our lawmakers seem to be exiting August the way they entered. I think it has kind of been the dog that didn’t bark.”

So, for example, Rep. Keith Ellison, D-Minn., has long been an adamant supporter of the inclusion of a so-called “public option,” which would be insurance, similar to Medicare, that is operated by the government. Before the August recess, as the public option hung in limbo, Ellison proclaimed that he would not support a bill without a “robust” public plan.

Speaking Sunday at the Minnesota State Fair, Ellison repeated the same message during an interview with MinnPost and later with CNN.

“I’m hoping that he [President Obama] understands the essentiality of the public option,” Ellison told CNN.  “A number of us were on a conference call with him earlier in the week, telling him that we really do need that public option. And he said he preferred a public option. So, we are trying to give him the political backing he needs to get what he prefers… I’d like to see the president fight for it.”

On Saturday, the ranking member of the House Education and Labor Committee sounded a similar note during the weekly Republican radio address.

“Democrats have crafted this legislation behind closed doors, creating a partisan blueprint that — at last count — clocked in at more than 1,000 pages,” Kline said.

“It’s complicated, it’s convoluted and it’s quite simply not going to work. It’s time to press the ‘reset’ button.”

The rest of the delegation also remains in pretty much in the same place as before the recess. Reps. Tim Walz, Betty McCollum and Jim Oberstar — all Demcrats — generally support the bill being developed in the House, despite the traction that critics of the Democrats’ plan gained this August. Republican Reps. Erik Paulsen and Michele Bachmann are still opposed to it. And Rep. Collin Peterson, who is a Blue Dog Democrat, continues to have problems with the House bill, including how the public option is defined and financed.

“I’m not here to sell you anything,” Peterson said during a health care town hall in August, according to the Star Tribune. “I have not found a bill yet that I can support.”

Gridlock in Congress
On the Senate side, Democrat Al Franken remains in support of a public option as the best way to bring down costs. But Sen. Amy Klobuchar, also a Democrat, is still taking a wait-and-see approach and has not come down firmly for or against its inclusion.

“I am open to a public option, but I am waiting to see what it looks like in the Senate bill,” Klobuchar said in an interview this month with MinnPost. “We have a lot to lose if it isn’t done right… I think I am doing the right thing for the state by stepping back…”

The continuing gridlock on a national level is part of the reason that President Obama will be addressing a joint session of Congress on health care reform on Wednesday.

“I think it’s a great opportunity… for him to put the meat on the bones, to really give the American people some details,” Klobuchar told CNN on Sunday. “Because when I look back at this debate, I think one of the issues was when it first came up, it came out as, oh, here is the big plan, you could get this, you could get this, you could get that. And Americans, still struggling with the economy, understandably looking at some of the debt and deficits that we’re facing said, wait a minute. So I think it’s very important that the president steps back and says, we have a problem here.”

Of course, just because the lawmakers’ positions on health care didn’t shift significantly this summer, doesn’t mean that voters didn’t learn anything new.

During the August recess, many constituents had opportunities to interact with their lawmakers, or their lawmaker’s staff, and to gain a little clarity — if that is what they wanted — on some of the issues. And each member of the Minnesota’s congressional delegation chose to handle the potentially explosive situation over health care reform in their own way

“One thing that is striking about the Minnesota delegation is how each member of it has a distinctive style,” said Jacobs. “And, I think their approach to the town halls or community meetings about health care reflects the distinctiveness of the delegation… [And] speaks more to how they have defined their roles in Congress.”

The reasons differed. Ellison, McCollum and Bachmann all come from relatively safe districts where they were more than likely to run into a lot of supporters at a town hall event, said Jacobs. And Ellison and Bachmann seem to enjoy the town-hall format and the media attention associated with these events.

“This is simply the format that the Congressman prefers,” said Brian Elliot, Ellison’s district director.

Walz is also known to be a fan of town hall meetings. But Walz, who has held a tele-town hall event as well, also happens to be in more of a swing district.

“Congressman Walz is very sensitive to the fact that he is in a swing district, and a conservative one for a Democrat,” said Jacobs. “So he has to be quite aggressive in explaining what he is doing and why. He needs to be vigilant in explaining or justifying his behavior.”

Other approaches
Peterson, meanwhile, tends to favor smaller group meetings and less media attention. But, Jacobs said, he suspects criticism Peterson recently received about not holding town hall meetings might have led him to hold one this August.

The rest of the delegation — including Oberstar, Kline, Paulsen, Klobuchar and Franken — chose to have more general public-forum events or targeted meetings with selective groups like doctors,  insurance providers and or seniors.

“We kicked the idea [of having a town hall meeting] around, and our conclusion was that these things had become so politicized that they were more an exercise in interest groups mobilizing their members than having citizens come together to discuss it,” said John Schadl, Oberstar’s communications director.

Of those who chose not to have a traditional town-hall event, Klobuchar Kline, and Paulsen decided to hold tele-town halls, a format where constituents are joined together with the lawmaker over the phone.

The rise of this format, however, has been criticized by some who see it as a way for politicians to distance themselves from constituents who do not agree with them.

It also flies in the face of Minnesota’s history as a politically participatory state, which still caucuses and values face-to-face discussions over politics and policy, according to David Schultz, who teaches government and politics at Hamline University in St. Paul.

“I think this is a terrible way to speak about such an important issue, so isolating and sterile,” Sandra Fox, who resides in Paulsen’s district, said in an email to MinnPost.

During tele-town halls, callers can listen and submit their questions to an operator. But, ultimately, the politician’s staff gets to choose which questions get answered.

“It is clearly an effort to try to screen it [the health care discussion] better,” Schultz said. “Or take away the podium or photo opportunity for opponents.”

In an interview with the Pioneer Press, Klobuchar spokesman Linden Zakula said that they were told not to screen calls.  But he turned down a request from the Pioneer Press to observe how the staff selected callers.

Still, Schultz said that the tele-town hall approach has some obvious good sides. For instance, over 10,000 Minnesotans reportedly tuned in to Klobuchar’s tele-town hall — far more than could have fit in a local high school gymnasium.

“Garrison Keillor said Democracy is a great form of government for people who have a lot of time on their hands,” said Schultz. “Even if we bracketed aside all the potential problems with the tele-town hall, it does address the Garrison Keillor problem.”

In other words, people who might not be energized to actually get up and drive to a town hall meeting across town, or across a Congressional district, may tune in over the phone because it is more convenient.

More tele-hall events
Additionally, the tele-town hall allows for more flexibility when a lawmaker is selecting panelists. During Walz’s tele-town hall, for example, Secretary of Health and Human Services Kathleen Sebelius participated — something that Walz’s staff said would not have been possible to do in person.

To some extent, Schultz also acknowledged that the “classic New England town hall model” was something of a myth as well.

“I have always been skeptical of how much these town halls were meant to be wide open,” Schultz said. “I don’t think anyone in office really wants to be in a situation where citizens and journalists are asking questions that they are unprepared for.”

Now that more politicians have successfully made use of the tele-town hall event, Schultz predicted that it will be used more in the future.

“For every action there is an equal and opposite reaction. Candidates held town hall forums, and activists figured out how to manipulate them,” Schultz said. “Now the question becomes: How will these activists figure out how to restack the deck in their favor?”