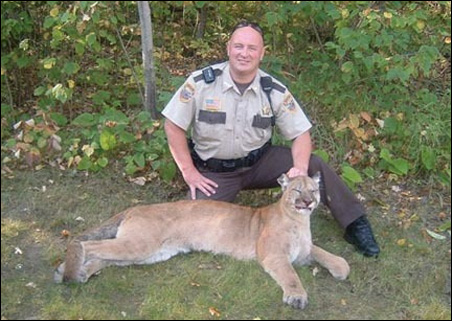 GRAND FORKS, N.D. — Drive most any northern Minnesota road at night and you should know to watch for deer, raccoons, skunks, maybe even moose or bear.

But a mountain lion?

Biologists with the state Department of Natural Resources report that a motorist struck and killed a mountain lion near Bemidji Friday night.

What especially attracted interest from the DNR was that initial reports indicated the big cat was female, which could suggest a breeding population in Minnesota. Up to now, mountain-lion sightings in the state tend to be of young males.

“They told us it was female, and we didn’t think to look closer,” said a slightly sheepish Blane Klemek, assistant area wildlife manager for the DNR in Bemidji. “But it’s not the easiest thing to determine on a cat,” especially one struck by a motor vehicle. “The folks at the lab will be able to do a fuller examination.”

Sent to Grand Rapids research office
Klemek said the 110-pound mountain lion appeared to be 2 to 3 years old, “in very good condition with good fur and good teeth,” and it appeared to be wild, not released or escaped from captivity. It had not been declawed and had no signs of ear tags or collar.

The animal was sent Monday to the DNR’s forest wildlife research office in Grand Rapids.

Mountain lions also are called puma, cougar, deer lion (deer make up 80 to 90 percent of their diet), Mexican lion or mountain screamer, for their piercing cry. Adults can reach a total length of 5 to 9 feet, including 2 to 3 feet of tail, and weigh 100 to 220 pounds. They can live about 12 years in the wild and prefer mountains, hilly woodlands and southern swamps. They can leap 20 feet in a single bound.

They are solitary animals, mostly nocturnal, according to scientists who have studied them. Active year-round, they are adept climbers and an individual animal has a range of 25 to 35 square miles.

Klemek said that wild cougars spotted in Minnesota likely are from the Black Hills of South Dakota or the Badlands of North Dakota.

“As territories are occupied out there by resident males; young males have to find their own territories and sometimes will migrate long distances,” he said. “There is still no evidence of a breeding population in Minnesota.”

Appear to be making a comeback
Mountain lions once roamed most of North America. They were eradicated from the Great Plains eastward by encroaching civilization, but they appear to have started making a comeback over the past 20 years.

A 150-pound cougar was captured in Worthington, Minn., in 1992, and sightings were reported in Maple Grove in 1996. But the first verified killing of a cougar in Minnesota since 1897 occurred in 2001 north of McGregor.

A year later, a cougar tripped an infrared-sensitive camera as it ate from a deer carcass in Savage, and a month after that a Bloomington police officer shot one as it crouched near a walking path. DNR pathologists inspected the animal but could not determine whether it had wandered in from the west or been released from captivity.

In eastern South Dakota and in Iowa, cougar sightings became so frequent about five years ago that they sparked rumors that state natural resources departments were stocking the animals to control deer populations. The rumors were so widespread in Iowa that the DNR posted a denial on its Web site. At the time, wildlife experts warned people not to run from a mountain lion they might encounter on the prairie or in the woodlands.

“‘You don’t take flight,” said John Wrede, a wildlife specialist in Rapid City, S.D., for the state Game, Fish and Parks Department. “For a lot of people, that is an instinct that’s very difficult to suppress. But it will stimulate the chase response. It telegraphs to the animal that you’re something easy.

“They are highly intelligent and very calculating animals,” he said. “But they are seldom aggressive unless backed into a corner or they have reason to defend a kill, a meal or a kitten. They’ll back out of a conflict virtually every time.’