When talking of health care, Rep. Tom Emmer, one of at least nine Republican candidates for governor, starts with some basic, though controversial, premises.

One, “we have the best health care system in the world.”

Two, the marketplace is to be more trusted than government.

Emmer says he is so concerned about the direction of health care in particular, and government in general, that on Monday he again proposed a state constitutional amendment that would “protect the freedom of personal choice in health care.”

Emmer, of Delano, was joined by two Republican colleagues from the Minnesota House, Mark Buesgens of Jordan and Peggy Scott of Andover. (It should be noted that Buesgens is a Republican in title only. In truth, he is almost a pure libertarian and does not bother participating in House Republican caucus meetings.) 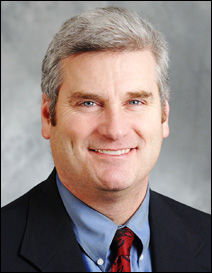 Emmer has floated this amendment idea in past years. It’s been greeted with a yawn and a snicker by a DFL-controlled House and almost certainly will get nowhere in the upcoming session, either.

Theoretically, if the amendment ever were to be tacked on to the Minnesota Constitution, it would allow the state to say, “No thanks,” to any federal effort to create a universal health care program or individuals to say, “Nope,” to any state universal system.

Steve Schier, a Carleton College political science professor, believes, by the way, that judges on the federal courts would have a good chuckle before tossing out any effort to use such an amendment.

10th Amendment interest heats up
The announcement by Emmer, Buesgens and Scott dovetails with all the recent political chat about states invoking the U.S. Constitution’s 10th Amendment in the health care debate.

Late last week, Gov. Tim Pawlenty hinted about — then backed off — the idea that Minnesota might use the 10th Amendment to avoid health care reform programs that may come out of Washington.  But Pawlenty is hardly the first pol to suggest using the 10th Amendment to avoid what he believes will be an unpopular federal government program. Throughout the country, there has been a growing chorus of 10-thers, ready to claim that states’ rights can trump federal authority. In Georgia, 10-thers, including the leader of the state Senate, want to use the 10th Amendment to fight off Washington efforts at health care reform. In Texas, 10-thers want to secede from the union. Minnesota’s own U.S. Rep. Michele Bachmann is considered a leading 10-ther.

The point is that the Emmer-Buesgens-Scott effort, which once would have seemed a radical right position, may not be so radical anymore.

In fact, from a purely political standpoint, Emmer’s announcement Monday surely will help him separate himself from the pack of nine, all of whom are appealing to the same conservative base.

Emmer, by the way, insists that he’s not re-introducing the amendment for political gain among likely delegates to the Republican Party’s endorsement convention.  He says the timing is simply right because the whole county has been talking about health care.

“Citizens are tuned in to the discussion,” said Emmer. “… This is something that should play well to everyone in the state. It crosses party lines. It’s about individual rights and the rights of individuals to make their own choices.”

But more than that, it’s about a huge distrust of government.

“The market will make available [affordable health insurance] if government gets out of the way,” Emmer said.  “… The federal government tramples the rights of citizens.”

A side note here: I like Emmer. He’s funny, passionate. But I would define his politics as radical right.

He doesn’t understand my assessment any more than I understand his politics.

But, in the next breath, he’s talking about government as the problem.

“Once you shrink government, you free those dollars and creativity will flow.”

This seems like an awfully big free pass for the excesses big businesses have shown. It was, after all, unbridled business that created problems in the environment, banking and health care  that led to so many of the very regulations that Emmer decries.

But Emmer’s thinking is little different from that of many of the other current Republican candidates for governor.

Where does all this distrust come from? 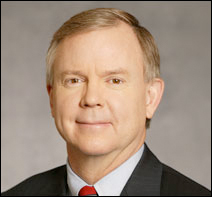 Charlie Weaver — a former Republican legislator, former candidate for attorney general, adviser to Pawlenty and currently the head of the Minnesota Business Partnership — is contemplating whether he will get into the race.

Though he avoids the word “moderate” in describing himself, he would seem more moderate than the current list of candidates. He believes virtually all candidates from both parties currently are spending all of their time trying to appeal to their bases, which leads to “a lot of far-out rhetoric.”

“I think you have to take everything that a Tom Emmer or an R.T. Rybak says right now with a grain of salt,” said Weaver.

In the end, he believes delegates of both parties will be more interested in “competence” than in the “strident postions.”

Perhaps, that’s wishful thinking on Weaver’s part. He said he must decide in the next few weeks whether to leave his job and get into the race. Clearly, in listening to Weaver, it’s clear he wants to make the leap.  He wants to believe that even he can win his party’s endorsement.

The first test of just what message will play well with likely Republican Party delegates to next summer’s endorsing convention will come at the party’s state convention on Oct. 3, when a straw poll will be inducted.

Weaver does admit that distrust of government is running high.

“I really think a large part of it is the reaction to Katrina,” Weaver said. “It was an incompetent government response to a crisis. The incompetence was at every level — federal, state and local. I think people everywhere were stunned. ‘Really, we can’t even get water to these people trapped in the Dome?’ “

Schier says current distrust levels run back 15 or more years. He’s developed a very professorial but simple formula on how to understand American politics: “The direction of the country is determined by whoever is most pissed off.”

That, he says, is how George W. Bush defeated Al Gore and how President Obama defeated John McCain.

And right now, the anti-government crowd is very, very angry.