Many years ago, more than I care to remember, actually, I found myself early one evening in a small conference room behind the ballroom of the Sheraton Hotel in northwest Washington, D.C., with Daniel Patrick Moynihan.

He, the Democratic senator from New York, and I, a member of the editorial board of the New York Daily News, were awaiting our cues to address a symposium of college students on the state of the presidency. Jimmy Carter was in residence at the White House, which should tell you all you need to know about the state of affairs at 1600 Pennsylvania Ave.

Moynihan, affable and expansive as always, was one of those exceedingly rare specimens in elective office: a genuine intellectual with a profound love of ideas. In the course of an hour or so, we talked of many things, and I asked him point-blank who had exercised the most influence over his thinking on the social issues for which he was an acknowledged expert.

“Irving Kristol,” he said, without missing a beat. And while he ticked off a number of other names, all of them prominent thinkers of the day, he returned again to Kristol. “He is a titan,” Moynihan said.

That, precisely, is what Kristol was. 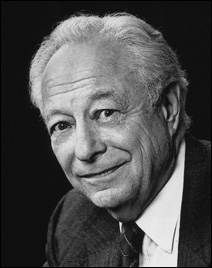 Irving Kristol died Friday in Arlington, Va., of what his son, Bill Kristol, founder and editor of The Weekly Standard, said were complications from lung cancer. Kristol was 89.

There is no serious student of politics in the past 30 years who has not been influenced by Kristol’s thinking, either directly or inferentially. He was, perhaps most notably, one of the progenitors of neoconservatism, adherents of which he took delight in defining as liberals who had been “mugged by reality.”

Like most intellectuals, he was a man considerably more than the sum of his parts. As the New York Times pointed out in its excellent obituary, Kristol “exerted an influence across generations, from William F. Buckley Jr. to the columnist David Brooks, through a variety of positions he held over a long career: executive vice president of Basic Books, contributor to the Wall Street Journal, professor of social thought at New York University, senior fellow at the American Enterprise Institute.”

There was more. He was not only an early editor of Commentary magazine, but the founder of another: Public Interest, a seminal journal that exerted enormous influence for decades over prominent social thinkers such as Moynihan, Nathan Glazer, Robert Nisbet, Daniel Bell, Gary Wills — the list is long and formidable.

Moreover, he wrote four immensely well-received books: “On the Democratic Idea in America” (1972), “Two Cheers for Capitalism” (1978), “Reflections of a Neoconservative” (1983) and “Neoconservatism: The Autobiography of an Idea” (1995). The titles convey a sense of Kristol’s dedication to a point of view, not a party line.

Interestingly, it wasn’t Kristol who coined the term “neoconservative,” but Michael Harrington, a liberal activist who first used it in a 1973 essay on former liberals like Kristol who had bolted the reservation.

Growing up in New York City in the 1920s and ’30s, Kristol, like so many offsping of Jewish immigrants, was passionate about books, keenly aware of the social fallout from the Great Depression and staunchly allied with the working class. That passion led him to Marxism, again, like many of his educated contemporaries, but he soon parted with the hard-core left, scorning its totalitarianism, the vapidity of its ideas and the thuggishness of its actions.

That revulsion with violence is one of the principal reasons why he, together with scores of other prominent Democrats, broke with the New Left in the 1960s. Kristol dismissed the vaunted “counterculture” of the time as little more than “moral anarchy” — a celebration of boorishness and wretched excess.

Kristol was married to Gertrude Himmelfarb, the critic and distinguished historian of 19th century England. He called her “Bea,” and, according to the journalist Diana West, who interned at Public Interest fresh out of Yale, the two relished spending evenings at home reading crime novels together and watching cop shows on TV — simultaneously.

John Podhoretz, the present editor of Commentary, noted that “the clarity of [Kristol’s] thinking and the surety of his purpose were one and the same; they were immeasurably enhanced by a powerful curiosity for the way things worked and the ways in which things could be made to work better. His was a restless intelligence, always on the move; there was not an idea he didn’t want to play with. … He was a conservative by temperament and conviction, but he was an innovator to the depths of his being.”

His loss is not easily absorbed.