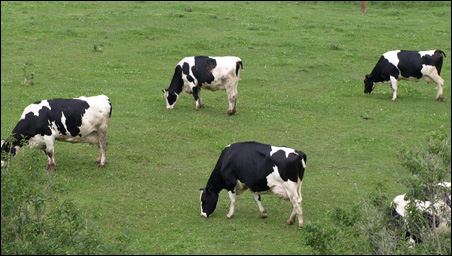 WASHINGTON, D.C. — It could have been a scene straight from the Minnesota State Fair: a cow munching hay with a gaggle of politicians milling around and talking.

But instead of playing out under a tent in St. Paul, the event took place this morning just outside of the Capitol in Washington, D.C.

The topic was the dairy crisis. The cow, an Ayrshire named Maggie, made for an effective backdrop.

“We don’t want to start being dependent on foreign [milk], like we’re dependent on foreign oil,” said Sen. Amy Klobuchar, D-Minn., at the National Farmers Union press conference. “They have hit what we call a rough patch right now in dairy and we need to help them so that we can keep these jobs at these small farms all over our country that are really the backbone of our agriculture community.”

Klobuchar, who recently met with a group of nearly 75 dairy farmers in Foley, Minn., said that the situation had become particularly dire in Minnesota.

“I heard directly their stories,” Klobuchar said. “How they are just trying to hang on through this hard time. And they’ve been through hard times before. [But] they’ve said that they’ve never seen anything like this. The price of raw milk paid to farmers has dropped to its lowest level in 40 years and the Agriculture Department forecast last week that U.S. farm profits will fall 38 percent this year, indicating that this slump is taking hold in rural America.”

Klobuchar was joined by other dairy state senators including Sens. Bernie Sanders and Patrick Leahy of Vermont, Charles Schumer of New York, Tom Udall of New Mexico, and Robert Casey Jr. of Pennsylvania.

Seeking $350 million
The National Farmers Union and the senators held the press conference to raise awareness of problems in the dairy industry and to urge the House to pass an amendment, which would give an additional $350 million to dairy farmers.

This summer, Secretary of Agriculture Tom Vilsack temporarily increased the amount that the government pays for dairy produces at the urging of  Klobuchar, Leahy and Sanders. The money increased farmers’ revenue by $243 million, according to administration estimates. But it hasn’t been enough, according to Klobuchar.

“When I met with the dairy farmers in Foley, there were also some members of the credit union there and they said even in the past month one guy had three people visit who were trying to keep their farms, but were headed toward bankruptcy,” Klobuchar said. “So we are starting to lose dairy farms… [And] if you let these farms go, you’re not going to get them back again.”

Last month, the Senate passed a measure that Klobuchar cosponsored with Sanders which would provide an additional $350 million to the U.S. Department of Agriculture for dairy farmers. Klobuchar called on the Agriculture Appropriations Conference Committee on Tuesday to adopt the Senate language in their final version of the bill.

Sanders said he was optimistic that the House would not take issue with its inclusion. But he acknowledged that it was just a short-term fix for a broken system.

“In my view, long term, we need to do some bold thinking so we don’t continue to have the kind of volatility that we have had for so many years, which has resulted in the demise of thousands of dairy farmers in this country” Sanders said.

Long-term issues include the virtual monopolies that currently exist in the industry and problems with co-ops, said Sanders.

A hearing on the topic is tentatively planned for this fall.

In Minnesota, the sixth biggest dairy producing state in the country, dairy made up 11 percent of overall agriculture sales in 2006. It is the fourth largest agricultural sector behind corn, hogs and soybeans.

Most Minnesota dairy farms are family operated, according to Mike Schommer, communications director for the Minnesota Department of Agriculture.

In 2007, there were 4,361 dairy farms in the state (a dairy farm is defined as a farm where 50 percent or more of the sales come from dairy cattle and milk production). About three quarters of those farms had fewer than 100 cows.