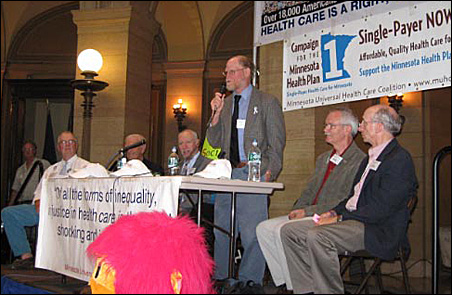 MinnPost photo by Casey Selix
Dr. Paul Hochfeld, one of the organizers of the Mad As Hell Doctors tour, addresses the crowd in the Capitol rotunda.

Could Minnesota be the next Saskatchewan in the single-payer health care movement?

The possibility was raised Wednesday during the two-hour Mad As Hell Doctors rally in the state Capitol rotunda.

“This is about movement-building,” said U.S. Rep. Dennis Kucinich, D-Ohio, who spoke to the rally via telephone. “The day will arrive when health care is a civil right, and if there’s one place in the nation that can make this happen, it’s Minnesota.”

Not if state Rep. Tom Emmers, R-Delano, has any say in the matter. On Monday, the gubernatorial candidate and two other lawmakers said they would introduce a state constitutional amendment to “protect the freedom of personal choice in health care.”

Effort to protect single-payer option for states
Kucinich is sponsor of an amendment to federal health care-reform legislation that would protect states’ rights if they want to pursue their own single-payer plans. State Sen. John Marty, DFL-Roseville, a candidate for governor, and Rep. David Bly, DFL-Northfield, are co-authors of the Minnesota Health Plan, a single-payer health care program that would cover necessary services for Minnesotans from cradle to grave. The legislation has 71 co-sponsors.

The Mad As Hell Doctors left Oregon Sept. 8 on a 26-city road trip en route to Washington, D.C., where they hope to meet with President Barack Obama to lobby for a single-payer, or Medicare for All, plan. Obama hasn’t said yes yet, but the White House has started blocking emails of the group’s form letters. About 5,000 emails urging Obama to meet with the doctors had been sent at last check, said Dr. Paul Hochfeld, of Corvallis, Ore., who urged rally attendees to send emails from their own addresses.

Hochfeld, producer of the “Health, Money and Fear” documentary featured on MinnPost in July, said the White House called to find out when the form letter would be removed from the site because they were being inundated.

“We replied we would be delighted to do that as soon as President Obama agrees to meet with the Mad As Hell Doctors and have a discussion about single-payer,” Hochfeld told the crowd.

That brought a round of applause and cheers from 100 or so folks in the rotunda.

The rally came four days after Obama visited Minnesota to push his health-care reform package, which includes a public option or insurance exchange but not a government-run single-payer plan.

Visits to Mankato and the Capitol
The Mad As Hell Doctors stopped at a Mankato church on Wednesday before arriving in St. Paul and parking their Winnebago in front of the Capitol, within the sight line of Republican Gov. Tim Pawlenty’s office. Pawlenty, considered a 2012 presidential contender, has been critical of Obama’s and Democrats’ health-care reform proposals.

In an interview before the rally, Hochfeld acknowledged that single-payer is a long shot in this Congress. The group would like to see a presidential commission look at health care “objectively — with the insurance companies and stakeholders out of the room.”

If nothing else, he told MinnPost, the national debate will be an opportunity to make lemonade out of lemons. “If we don’t get single-payer out of this Congress, and I don’t think we’re going to get single-payer out of this Congress, we’ll be making lemonade. … We’ll use health care as the poster child for why we need campaign finance reform and why we need to not give corporations any more rights over people.”

’37th in health outcomes’
The doctors believe that a single-payer system is the best route to universal health care and that it would allow their profession to focus more on patients instead of the varying claim requirements of 1,300 health insurance companies in the nation.

One by one, doctors explained to the crowd why they’re mad as hell about the state of our health-care system. Here are a few:

“I’m mad as hell when we’re ranked by the World Health Organization as 37th in health outcomes and our nation spends twice as much on health care,” said Dr. Marc Sapir of Alameda, Calif. 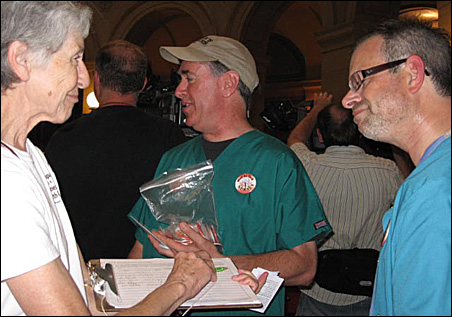 Retired internist Robert Seward of Oregon, who once worked for the VA Hospital in St. Cloud, Minn.: “I’m mad because Americans are going bankrupt from health-care bills.”

Dr. Joe Eusterman of Portland, who went to the University of Minnesota’s medical school: “I’m mad as hell because of the lies and fear-mongering being used by the status-quo folks.”

Not just doctors are mad. Mad As Hell Nurses from Minnesota spoke, too.

Rally attendees also got to express their anger in a cheer led by Mad As Hell Doctors’ creative director Adam Klugman. The group’s name, he explained, comes from the 1976 movie “Network,” when a fired TV anchor becomes so anguished that he yells out the window: “I’m mad as hell and I’m not going to take it anymore.”

Klugman got the crowd to raise their voices in the echo chamber-like rotunda: “I’m mad as hell and I’m not going to take it anymore!”

Single-payer advocate and Rep. Keith Ellison, D-Minneapolis, also spoke to the group by telephone. “Sixty-three percent of doctors support the public option. … I want to let you know we are rock-solid — we won’t vote for anything that doesn’t include a public option.”

As for state Republican lawmakers’ plan to protect personal choices in health care?

As for Minnesota becoming the next Saskatchewan? “We hope Minnesota can play a lead role in that,” Marty said.

Wednesday’s rally was sponsored by the Minnesota chapter of Physicians for a National Health Plan, which has more than 400 members in Minnesota.

Next stop for the Mad As Hell Doctors: Madison, Wis.

Casey Selix, a news editor and staff writer for MinnPost.com, can be reached at cselix[at]minnpost.com.

Related: Oregon is not only the base of the Mad As Hell Doctors group but also the home state of U.S. Sen. Ron Wyden, the “Energizer Bunny of health-care reform.” Washington Post columnist Ruth Marcus says the Energizer Bunny is worried, and we should be, too.