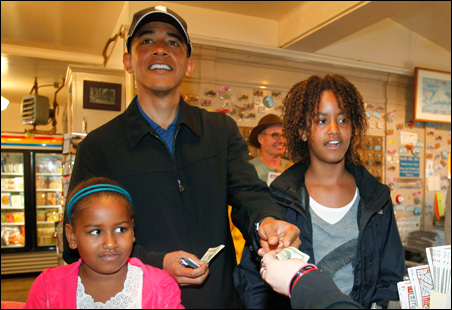 REUTERS/Jason Reed
President Obama with daughters Sasha, left, and Malia: Obama will talk to school kids around the country Tuesday.

President Obama wants a friendly little chat with kids all over the nation Tuesday to encourage them to work hard in school, but some parents don’t like the idea.

Obama’s scheduled webcast and television address is drawing criticism from some conservatives who argue that the president is trying to indoctrinate students with his political beliefs. Parents in Minnesota and around the country are calling schools asking questions about the address, and school officials are scrambling to figure out what to do.

In Minneapolis Public Schools, which opened doors to students returning from summer vacation this week, teachers have the option of allowing students to watch the president’s address on C-Span Tuesday or play back a recording of a webcast of the speech.

“We think it is wonderful the president of the U.S. will address students about the importance of education. We hope our students will be inspired to succeed in the classroom by hearing this message,” Minneapolis Schools’ spokesman Stan Alleyne said this afternoon. “We do not view this as a political message. We would back any sitting U.S. president willing to work with us to motivate our students. Motivating students is not a controversial issue.”

But in Inver Grove Heights Community Schools, “the district has not taken a position” on the issue one way or another, Superintendent Deirdre Wells said this afternoon.

Wells acknowledged that the district has had “quite a number of” parents calling or emailing her office over the last two days asking that they be informed if their child will view the president’s address. Principals and teachers are being informed of the parents’ requests.

All of these parents have been “extremely considerate,” Wells said. “What they are saying is they prefer to have conversations at home with their child about any ideologies.”

But Wells said it is unlikely students will see Obama’s address because he is speaking on the opening day of school, and normally the first day is extremely hectic and busy.

“Chances are almost zero” the president’s talk will be shown in Mounds View Schools’ classrooms as well, according to district spokesman Colin Sokolowski, because of issues revolving around it being  the first day of school. (Note that in many schools across the nation, school has been in session for a week or more.)

Also, in the Mounds View district on Tuesday, only sixth graders will attend middle-school classes and only ninth graders will appear for high school because it is a day for welcome and orientation of newcomers.  That means only one third of middle-schoolers and one-quarter of high school students will be in school Tuesday. Elementary school principals will preview the president’s remarks.

“Could a video [of the remarks] be viewed or shown at a later time? Absolutely yes,” Sokolowski said.

According to MPR, school officials in Edina and Chaska plan to let teachers decide whether to show the address in their classrooms. Elk River’s school district spokesman said there will be a neutral location where student who want to view the speech can watch it.

White House spokesman Tommy Vietor said today that Obama’s address is not a policy speech but rather made with the intent to inspire students to work hard in school.

Alleyne said schools throughout the nation were informed last week by the U.S. Department of Education that the president would address school children.

Teachers have been urged by the Department of Education to create lesson plans around the speech, using materials provided on the department’s website that encourage students to learn about Obama and other presidents.

“The education of our students shouldn’t become a partisan pawn for those who are trying to score political points against the president,” said Dooher, head of the state’s largest teachers union.  This is the first such nationwide broadcast from a U.S. president to all of the country’s school children at once, he said.

The president has said he will “challenge students to work hard, set educational goals and take responsibility for their learning,’’ the labor official said.

Such inspiration is important to a well-educated population, Dooher said. He asked Minnesota’s superintendents to “use this teachable moment and not stand in the way of the president as he addresses America’s school children.’’

Cynthia Boyd writes on education, health, social issues and other topics. She can be reached at cboyd [at] minnpost [dot].

Minnesota schools scramble to deal with Obama’s address to kids