WASHINGTON, D.C. — In a huge win for Minnesota, the health care reform bill in the Senate Finance Committee now includes language that will fundamentally change how Medicare payments are made in order to reward states that provide high-quality, low-cost care.

The bill — unveiled last week by Sen. Max Baucus, who chairs the Finance Committee — originally did not include the Medicare payment reform language.

But, Baucus decided to add it late last night after an evening meeting with Minnesota Sen. Amy Klobuchar and other Finance Committee senators from such states as Washington and Oregon that also provide high-quality health care at relatively low costs.

“We are pretty excited about it,” said Klobuchar, who introduced a Medicare payment reform bill earlier this summer. “This is a big deal because it was our original work that I have been doing, and this was our bill from the beginning,”

Proposal represents biggest Medicare payment change ever
The proposal, which would be budget neutral, would establish a new payment structure for Medicare based on quality of care. If enacted, it would represent the most significant change to the Medicare payment model since the government-run program went into effect in 1966.

Medicare, which covers those age 65 and older, currently uses a fee-for-service model. The result is that states that provide fewer health care services — such as Minnesota, Wisconsin, North Dakota, Washington and Oregon — receive less money. At the same time, states that provide a greater volume of services — such as Florida, New York, California and Texas — receive reimbursements that can be more than double those paid to other states.

The problem with the current model is that more services do not equal better outcomes and quality of care, according to research conducted over the last 10 years by the Dartmouth Institute for Health Policy and Clinical Practice.

The issue, however, has been a nonstarter for years, in part because such politically powerful states as Florida, New York, California and Texas benefit from the current model.

But, last week, a bipartisan group of 28 senators, including Klobuchar and Minnesota Sen. Al Franken, who has also been working to have the measure included, wrote a letter to the president stressing the importance of robust Medicare payment reforms. 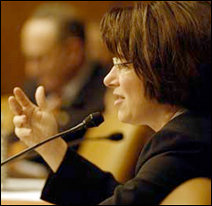 Today, Klobuchar said that senators on the Finance Committee from states that have lower quality care “seemed to be coming around.”

“They realize they need our support to get this done,” said Klobuchar.

Language would link payments
to quality, not volume
Thus, the new language in the Senate Finance bill would finally connect Medicare reimbursements to quality, as opposed to volume.

The measure gives the secretary of Health and Human Services, working with the Centers for Medicare and Medicaid Services, the power to develop quality measurements and a payment structure that would be based on quality of care relative to the cost of care. The secretary would have to account for variables that include geographic variations, demographic characteristics of a region, and the baseline health status of a given provider’s Medicare beneficiaries.

The secretary would also be required to account for special conditions of providers in rural and underserved communities.

Additionally, the quality assessments would be done on a group-practice level, as opposed to a statewide level. Thus, the amendment would reward physicians who deliver quality health care even if they are in a relatively low quality region.

The secretary of Health and Human Services would begin to implement the new payment structure in 2015. By 2017, all physician payments would need to be based on quality.

“The change included today will help control costs and get the most from our health care dollars. This will strengthen the strong safety net of Medicare by ensuring funds are there to pay for our seniors’ health care,” Klobuchar said in a statement.

The Mayo Clinic applauded the measure.

“It’s great,” said Bruce Kelly, director of government relations for the Mayo Clinic, adding: “It is starting to move Medicare in the direction of incorporating value into how they pay.”

Mayo also has supported the agreement that the House reached earlier this summer on Medicare payment reform.

Senate, House versions differ
Under the House agreement, the Institute of Medicine would have the responsibility of conducting two studies, one on geographic variations in payments and the other on how to reflect quality of care through reimbursements.

Based on the study results, the secretary of Health and Human Services would have to implement a new payment rate and submit the plan to Congress, which then would have the opportunity to veto the new payment model.

On Tuesday, Kelly said he did not favor one proposal over the other.

“At this point, I would say it is premature for us to pick sides,” said Kelly, adding, “The fact that both bills have this concept in there is a great success.”

In the Senate, however, proponents of payment reform have said that the language included in the Finance Committee bill is stronger than the House proposal.

“We would say no study, no delay,” Klobuchar said.

“It would not give veto power to Congress later on and it would be a straight rewarding of cost efficiency as opposed to putting in some money for the inefficient states.”

Though the measure made it over a major hurdle today when Baucus decided to include the language, there is still the likelihood that details will change.

The bill that is ultimately passed out of the Finance Committee will need to be merged with the bill that the Health Committee passed. Then, the resulting legislation will need to be passed by the Senate. Likewise, the health care bills on the House side also need to be merged and passed. At the end of all of that, the bills will go to conference committee to reach final agreement. And, at each stage, changes to the measure could be made.