And on the topic of the animosity toward Obama and his legislative priorities, Mondale acknowledged that he agreed with former President Jimmy Carter, who recently said that racism was behind some of the criticism.

But the focus of Mondale’s address to a gathering at George Washington University was the state of Obama’s presidency and what Obama needs to do to succeed.

“Having served in the Senate for a long time, I would say he has to learn how to push a little harder,” said Mondale, who represented Minnesota in the Senate for more than a decade. “It’s nice to talk. It’s nice to debate. But, when there are big issues, the president has to get personally, and intentionally, involved in order to move the Congress. And, I think we’re at the point where the president must [do this] to get from where we are to where we’re gonna go.”

As Congress has grown increasingly polarized over the years, Mondale said, it has become harder to bring the two sides, or even one side, together.

“I hope that’s changing now,” Mondale said. “But, it is discouraging to watch this health care debate… I’ve been surprised by the rigidity of it all. I thought maybe in the Senate Finance Committee, on which I served, that [Chairman] Max Baucus’s attempt to bring a group together and spend weeks in quiet, private discussions would bring forth something that we could work with, but it doesn’t appear that it has.” 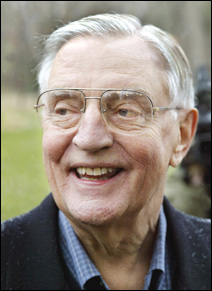 Frank Sesno, a professor at George Washington and director of the School of Media and Public Affairs who moderated the event on politics and public affairs, pointed out that Mondale had served in Congress at a contentious time, too.

Mondale’s said that while the country was divided in many ways during his time in Congress, the lawmakers seemed more able to come together on legislation.

“All of the civil rights legislation, none of it would have passed without a strong delegation of Republicans,” he said.

Mondale attributes the increased vitriol in political discussions to a movement that, he said, gained critical momentum with former President Ronald Reagan. (Mondale lost the presidential election to Reagan in 1984.)

“People really were getting tired of government,” Mondale said. “They really thought the economy could do it all — that if you just let the economy rip, [and] you don’t regulate it, all kinds of magic occurs.”

Mondale described it as a rising wave of “economic fundamentalism” and “religious rigidity.”

“And, I think those sort of ideological positions, which they insist on pressing on the American people, had its effect everywhere, including on Minnesota,” Mondale said. “And, sort of the cost of the harshness of that argument was that I think we lost a lot of civility.”

Criticism and racism
Sesno also asked Mondale about criticism of Obama, posing this question: “Your former boss, Jimmy Carter… said the other day that he thinks race is responsible for some of [this criticism of Obama]. Do you agree?”

Mondale paused to consider his answer. After a moment, he said, “Yeah.”

“Having lived through those years when civil rights was such a bitter issue… I know that some of that must still be around,” Mondale said.

But, he cautioned, he did not want to overstate the case or accuse any specific person of being a racist.

“I find it’s hard to talk about because I think most Americans are not racist — he [Obama] wouldn’t have been elected with the tremendous support that he got. People had to consider this when they voted, and so I think we are a country that [has] made a lot of progress,” Mondale said. “But, some of these debates, and some of these issues as they’re being discussed — I think I see an edge in them that’s a little bit different, a little harsher, than I have seen in other times.”

Role of VEEP
Sesno also asked Mondale about the role he played in strengthening the position of vice president.

Reading from a memo that Mondale wrote to Carter outlining the problems that he would want addressed before accepting the job of vice president, Sesno said:

“Generally speaking, you write: The vice president has performed a role characterized by ambiguity, disappointment, even antagonism… competition with the President, you go on, conflict with the White House staff, lack of meaningful assignments, lack of authority and inadequate access to vital information…”

“[And] that’s just part of the list,” Mondale said.

Under the Carter-Mondale administration, the vice presidency became a stronger, more substantive position, and has remained that way since, former Vice President Al Gore said in a documentary of Mondale’s life in public service, which was shown at the event on Wednesday.

According to Gore, U.S. vice presidents in America can be grouped into distinct categories: “Pre Walter Mondale and Post Walter Mondale.”

Mondale was unequivocal: “I believe Cheney went off the rails,” he said. “I think that the vice president is in a position where they have to be very careful about obeying the law and when they speak to the American people they have to be careful.”

Mondale said the Bush-Cheney administration abused the law numerous times, and then lied about it.

“I think the record is pretty bad and it hurt our country, and I’m sorry about it,” Mondale said. “And I’m pretty direct about it because it hurts me because I think it diminishes public respect for the process.

“This is an important principle in America,” he said. “…We are stronger when the President complies with the law, regardless of the enemy.”

Intelligence gathering
On some of the mysteries surrounding intelligence gathering and the wars in Iraq and Afghanistan, Mondale said Obama should support some kind of truth commission, like the one that Patrick Leahy, chairman of the Senate Judiciary Committee, has proposed.

“There is a big dark hole surrounding what happened in those six or eight years. There is a big debate about what happened,” Mondale said. “I think we would all be better off if we could take Pat Leahy’s recommendation and have a truth commission to get into it. And just let’s get the facts.”

Still, Mondale said, Obama has done “very well” in confronting what he described as a “range of miserable issues,” including the financial collapse and the subsequent bailout, and the wars in Iraq and Afghanistan.

“I think Secretary Gates is going to go down as one of the historically superb” secretaries of Defense, Mondale said.

Another plus of the Obama presidency? Without mentioning Bush, Mondale quipped: “I think it has been a long time since we had a President [who was] articulate and clear. I find it a great relief just to hear someone who makes sense.”