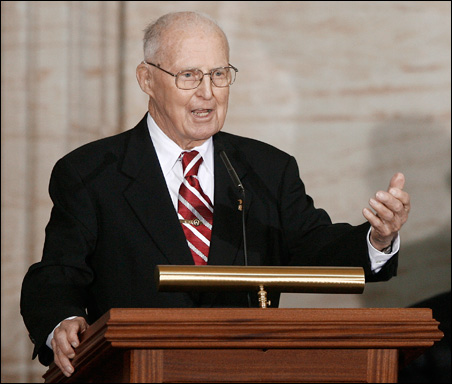 A giant among those pioneers was Norman Borlaug — the farm kid from Iowa who parlayed his degrees from the University of Minnesota into achievements that earned him the accolades “Father of the Green Revolution,” Nobel laureate, winner of the Congressional Gold Medal, and, simply, “Grain Man.”

Borlaug died from complications of cancer Saturday night at his home in Dallas, said a spokeswoman for Texas A&M University, where he was a distinguished professor of international agriculture. He was 95.

“My good friend Norman Borlaug has accomplished more than any other one individual in history in the battle to end world hunger,” former President Jimmy Carter said in the foreword to Borlaug’s 2006 biography, “The Man Who Fed the World.”

I first met Borlaug in a wheat field near Obregon, Mexico, in 1991. I was traveling with a group of science writers who wanted to see first-hand the birthplace of the Green Revolution. It was the home of the breakthroughs that had helped India and Pakistan become self-sufficient in wheat and dramatically boosted yields in China, Latin American, Australia, Europe and the United States.

Borlaug’s face lit up when I identified myself as a reporter from Minneapolis. We had dinner together that night, and he spent hours in the field the next day relating his studies in Minnesota to the work that was to save hundreds of millions of people from starvation.

Failed the entrance exam but launched the mission
Borlaug’s name marks a building on the University of Minnesota’s St. Paul campus where the young man from Cresco, Iowa, began his college education during the Great Depression of the ’30s.

I’ve often wondered whether it was the work ethic of that hardscrabble era or just old-fashioned Norwegian character that gave Borlaug immense pleasure in telling a self-deprecating story about his first months in Minnesota: He failed the University’s entrance exam and thus had to start in what then was General College.

Of course the moral of the story was that he worked hard enough to be admitted to a forestry program while also waiting on restaurant tables to earn his meals and saving money from summer jobs to pay for books and tuition. Ever ambitious, he pushed on to earn a Ph.D. in plant pathology in 1942.

Minnesota professors opened the door to Borlaug’s later achievements by recommending him to oversee a wheat research program started by the Rockefeller Foundation and the Mexican government in 1944.

It was the work that was to win him the Nobel Peace Prize in 1970.

Borlaug’s assignment in Mexico was to help farmers beat back a wheat fungus called stem rust. Essentially, the job called for repeatedly shuffling plant genes — without the benefit of today’s DNA tools, but instead by cross breeding through many generations until he had developed resistant plants.

It was frustrating work that would take many years. And Borlaug was not a patient man. He tried cheating time by growing one crop in northern Mexico and then hauling the seeds 1,200 miles south to sneak in a second crop each year.

Inadvertently, he was adding rare adaptability to his wheat. It could flourish in many different settings. What’s more, it resisted stem rust.

But yields were pitiful. When Borlaug tried adding fertilizer, the plants grew so tall they fell over in the field.

The breakthrough finally came in 1954, when Borlaug crossed his Mexican wheat with dwarf varieties from Japan.

The result was to fill breadbaskets worldwide: sturdy, disease-resistant wheat that thrived under vastly different growing conditions and yielded bountifully when fertilized.

Borlaug had earned a high rank among plant geneticists, but he did something more that set him beyond other scientists, said Ronald Phillips, Regents professor and McKnight presidential chair in genomics at the University of Minnesota.

“Because of his strong personal interest in doing something for starving people, he worked out the politics to move tons of his seed to India and Pakistan,” Phillips said. “He encountered various political hang-ups, but he got it done and he brought India and Pakistan out of starvation mode. That was one unique aspect of him: he pushed it to the end point.”

Providing bread, promoting peace
Borlaug loved telling the story of the October day in 1970 when his wife, Margaret, rumbled in a pickup truck through the wheat fields of his Mexican experiment station to tell him the Nobel Committee had been ringing their phone off the hook.

“Someone is pulling your leg,” he responded before turning back to his work.

In awarding him the Peace Prize, the Nobel Committee said, “More than any other single person of this age, he has helped provide bread for a hungry world. We have made this choice in the hope that providing bread will also give the world peace.”

In his Nobel lecture, Borlaug railed like an angry prophet against complacency in the face of world hunger: “Man can and must prevent the tragedy of famine in the future instead of merely trying with pious regret to salvage the human wreckage of the famine, as he has so often done in the past. We will be guilty of criminal negligence, without extenuation, if we permit future famines. Humanity cannot tolerate that guilt.”

Fighting in the ring and outside, too
Borlaug was a fighter. More specifically in Minnesota, he was a college wrestler. And he was inducted into the National Wrestling Hall of Fame in 1992.

But he flashed his fighting spirit most often outside the ring in arguing that freedom from hunger was a moral right for people everywhere.

After our introduction in Mexico, I met him occasionally during his many visits to Minnesota and Iowa. Always, the interviews were intense, with his blue eyes flashing behind gold-rimmed bifocals.

He would jab his finger on the breakfast table to drive home an argument against his critics.

The “Green Revolution” had been criticized for expanding the use of polluting chemicals, large-scale mechanized farming and the loss of plant diversity as farmers worldwide rushed to adopt the new wheat varieties.

“Stop right there,” Borlaug ordered when I quizzed him on that point.

Farm chemicals, like medicine, must be used correctly, he insisted. And millions of farmers throughout Asia benefited by growing the new wheat on plots smaller than 10 acres without expensive machinery.

Another fighting point was what Borlaug called the “Population Monster.”

Critics said the breakthroughs in wheat and other food crops set off a predictable human spiral. Provide more food. Fewer people die from starvation. Population skyrockets to the point where the world must scramble for food again.

Borlaug rejected such thinking. He insisted that people could use their God-given intelligence to control population through family planning just as farmers from the beginning of agriculture had used their intellects to improve yields.

“It is far better for mankind to be struggling with the new problems caused by abundance than with the old problems caused by famine,” he said in his Nobel lecture. “I am convinced that if all policymakers would take sufficient interest in population control and in aggressively employing and exploiting agricultural development as a potent instrument of agrarian prosperity and economic advancement, many of the social ills of the present day could soon become problems of the past.”

In a related issue, Borlaug was impatient with critics of genetically modified crops. Almost all the crops under cultivation today have had their genes shuffled — sometimes by nature, sometimes by farmers, sometimes by plant scientists, he told me. Species barriers are significant in nature but not inviolate, he said. Indeed, the wheat that goes into ordinary leavened bread carries the genes of three different plant species.

Fighting famine to the end
Borlaug was 77 when I met him in Mexico. And he had just launched several ambitious enterprises, throwing himself into work with some of the world’s poorest farmers.

He had joined forces with former President Carter and the Nippon Foundation of Japan to develop an African agricultural initiative.

He also had established the World Food Prize in 1986, calling it the “Nobel Prize” for food and agriculture. A Youth Institute related to the food prize has engaged young people from Minnesota and around the world in the cause of feeding the hungry.

Even into his 90s, Borlaug fought tirelessly against famine.

I crossed his trail in Kenya last year, covering the story of a new outbreak of wheat stem rust. Kenyan researchers told me Borlaug had been there a couple of years ahead of me. He had trekked through mountain fields to inspect the evidence of the scourge he had battled 60 years earlier.

Alarmed by what he saw in Kenya, Borlaug threw his considerable influence into alerting the world and raising funds for a new initiative against the deadly wheat fungus. Now younger scientists from Minnesota and around the world have joined the modern-day fight against stem rust.

Borlaug was living in Texas when I first met him. He gave me his home phone number and invited me to call any time. I did from time to time over the years in connection with articles I was writing. Most recently, I called early this year to ask about the new stem rust outbreak in Kenya.

He was as impatient with cancer as he had been with complacency about hunger. Of course he could take time to talk! There was work to do, and he was going to do his share, even from his sickbed.

“He stimulated research clear up to the last moments of his life,” said Phillips at the University of Minnesota. “He is a huge inspiration to everybody, but particularly to students and researchers both here and in the developing world. … I hope the point that will stand out from these tributes is that a person or a group or an institution can make a huge difference if they work at it.”

Borlaug was preceded in death by his wife, Margaret, whom he met in Minnesota.

Memorial service plans
A memorial service will be held in Minnesota, Phillips said, but the date won’t be set until planners here know the complete schedule for services in Texas.

The family has requested, in lieu of flowers, that memorials be sent to the Borlaug International Scholars Fund, according to a news release from Texas A & M. Checks should be made payable to “Texas A&M Foundation” and may be mailed to the Texas A&M Foundation, 401 George Bush Drive, College Station, TX 77840-2811. Please indicate in the Memo line “Borlaug International Scholars Fund.” The fund will allow students from developing countries to pursue graduate studies on short-term experiential learning activities at Texas A&M University or other land grant universities of the United States.