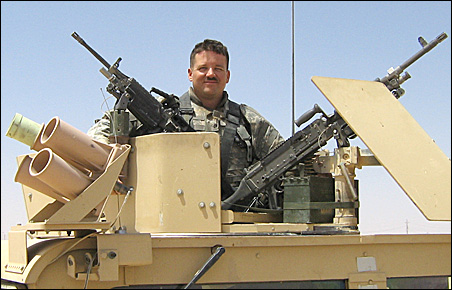 Courtesy of Dave Thul
Sgt. Dave Thul of Owatonna, Minn., on duty in Iraq with the Minnesota Army National Guard.

Racing down a highway in northern Iraq at the head of a convoy of 100 tankers barreling toward the Jordanian border is a far cry from a race for the Owatonna City Council, but Dave Thul seems to have made the transition with relative ease — and inordinate aplomb.

In fact, Thul, 37, who has spent most of his adult years in the uniform of the Minnesota Army National Guard, first in Kosovo and then in Iraq, finds the issues of city growth, storm drains and a water park considerably more compelling these days than armored vehicles and grenade launchers.

And while he still reports once a month for duty at the local armory, he finds political activism — as co-chairman of the Steele County Republican Party, and organizer of an anti-tax Tea Party in Owatonna that attracted 200 people — more rewarding.

Chalk the change up to experience, and a hard-won maturity that surpasses his age.

Explosion in Iraq
He walks with a crutch, a reminder, if one were ever needed, of his service in Iraq. Yet Thul seems almost embarrassed about it.

“The VA insists I use the crutch,” he said, adding quickly: “The injury is non-combat related. I probably jumped off my ASV one too many times with all the body armor on. It wrenched my knee.”

An ASV, or M1117 Armored Service Vehicle, is a four-wheel-drive, lightly armored vehicle mounting a turret with a Mark-19 grenade launcher and a .50-caliber machine gun. The fact that is it wheeled, rather than tracked, makes it swift and highly maneuverable — ideal for the work in which Thul and his unit were engaged.

As a sergeant (E5) in First Battalion, 133rd Regiment of Minnesota’s own 34th “Red Bull” Infantry Division, Thul was commander of one of four ASVs taking point — leading the way, in laymen’s terms — about 10 to 15 miles in front of a convoy of about 130 civilian tankers and 35 military vehicles heading at top speed from Al Asad, Iraq, to the Jordanian border. It was July 31, 2006.

The road was good, weather excellent (if demonically hot), potential problems seemed few, and the convoy was making excellent time. Thul’s training kept him on constant alert. Eyes always surveying the highway and shoulder ahead with binoculars, he suddenly spotted slim wooden “aiming stakes” alongside the highway.

He barked an order and the ASV’s driver hit the breaks.

Seconds later an IED detonated, a huge explosion that “sprayed our vehicle pretty good with shrapnel. None of it penetrated the vehicle; the armor did its job.”

“There were no casualties, just some headaches and concussions from the blast,” he said quietly, a distant look in his eyes. “I remember the time exactly. It was 3:47 p.m.”

Joined on impulse
The distance between Iraq and Owatonna, where Thul lives with his wife, Heather, and their two children, Alex, 9, and Cassie, 6, cannot be measured in miles alone. The signposts of a man’s life tell different stories, offer different measurements.

Thul, who was born in St. Paul and reared in Minnetonka, joined the Minnesota Army National Guard on an impulse. “I suppose it would be great to say I was patriotic and wanted to serve my country,” he said, but the truth was more prosaic.

Deciding against enrolling in college immediately after graduating from Minnetonka High School, Thul drifted for a while among low-paying jobs. A shared townhouse and squabbling roommates resulted in the kind of domestic implosion that, like a sudden summer squall, leaves everyone scrambling for a place to take shelter.

“I happened to pass by a National Guard recruiting office one day as I was trying to figure out where I was going to live, what I was going to do with my life. The Army was something I had always thought about but never really seriously considered, but it actually worked out well. Basic training not only gave me four months of discipline, which was sorely lacking at that point in my life, but also four months of making a salary and not being able to spend very much.

“I was able to come home to Minnesota after basic, get an apartment, get a job and turn my life around.”

In October 2005, with the war in Iraq well on its way toward reaching an unprecedented crescendo of violence, not only for Iraqis but for U.S. military personnel, Thul’s Guard unit was activated. After deployment training at Camp Shelby, Mississippi, he and his unit flew into Iraq in March 2006.

“Most of the convoys we safeguarded were fuel,” he said, “Ironically, on one run we brought back a shipment of sand. The thing is that the sand found in the Iraqi desert is not good for making cement, so it is imported from Jordan. But the irony of hauling trucks full of sand through the Iraqi desert always makes me chuckle.”

With his tour of duty scheduled to end in April 2007, Thul’s unit was extended for an additional 120 days as part of Iraq commander Gen. David Patraeus’ surge. The roadside bomb he and his crew survived that July was a “life-changing event,” he said.

Change in life
Iraq proved to be the incubator for many changes in Thul’s life. For one thing, he’s enrolled in American Military University, a fully accredited on-line institution where he’s majoring in history. The course study is intense and time-consuming, he said, and he misses the face-to-face interaction with instructors and fellow students he’d enjoy at a “bricks-and-mortar” college. He’s considering transferring to a local school to finish his degree.

And Iraq also engendered a serious interest in politics.

“I always paid attention to politics,” he said, “but all of a sudden I was in the midst of the biggest news story. I started getting active in politics because in late 2006 it looked like we could win the war militarily but lose it politically because of lack of support back home.”

When asked what he meant by lack of support, he pointed to the statement of Senate Majority Leader Harry Reid, in which the Nevada Democrat declared that “the war is lost.”

“That really set me and my guys off,” he said. “Reid galvanized me politically.”

That spark manifested itself in a keen and growing interest in U.S. politics. In his spare time he began surfing the Internet, avidly reading political news and searching out blogs with varying points of view. That led inevitably to setting up his own blog in January 2007 — Foreign and Domestic.

“I named it that because here I swore to uphold the Constitution against all enemies, foreign and domestic,” he said, “and I came to believe that many of those at home who opposed our mission in Iraq had similar goals to the enemy we were fighting. It was something to which I really took offense.”

In May 2006, Thul sent a message to Powerline, the iconic conservative web site in the Twin Cities, which had been reviewing conservative books. He asked if Powerline would send books to the troops in Iraq after they had been read. The request was posted on Powerline, and the result was astonishing.

“I ended up getting 600 to 700 packages of books and conservative magazines from people all across the [United States],” Thul said. “It was amazing. We would pass the books and mags out to other troops as we traveled around. I called it our Powerline Library. It was a huge hit.”

Thul said the first time he really considered himself to be an “activist” was last year during the protests at the Republican National Convention in St. Paul. He and other local conservative bloggers marshaled counter-demonstrations that were, he admitted, puny compared to the thousands of left-wingers who filled the streets of the capital.

“I had never done anything like that in my life,” he said. “The extremes among the anti-war protesters was interesting. Some of them were quite reasonable and argued their positions well, but others spewed rage and obscenities at you for daring to have a different message.”

It was an eye-opener, and propelled him into organized politics.

He cast his lot with the GOP.

Turning to an issue that has increasing immediacy, he said he worries about the charges that those who oppose President Obama’s policies are inherently racist.

“I am happy that we have an African-American in the Oval Office,” Thul said. “Not only does it disprove the notion that a black man can’t get ahead, it finally brings the country to the point where we should be at the endgame of racial politics. If we can elect a black man, there is now nothing that a minority cannot do.

“I shy away from looking at people as members of groups, minority or otherwise. I have always looked at a person and judged his or her actions, intents, their core values. A person’s actions speak more to me than the color of their skin, or their heritage. It’s what they do that says who they are.”

That, one suspects, is how he would want others to judge him, too.

One of the faces of Minnesota conservatism: Dave Thul