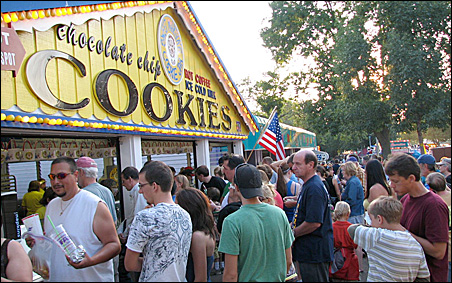 MinnPost photo by Joe Kimball
Economic times may be bad, but people are still lining up for State Fair food.

The weather’s been great and people have been streaming out to the State Fair in big numbers. The question I had: Are they spending any money?

Attendance records were shattered on opening day, Aug. 27, and on Tuesday, giving hope to vendors that they’d have — as they say — “a good fair.”

Most vendors I talked to Thursday said they were doing as well, or better, than last year, despite the weak economy and the worry that nobody had any extra cash to spend on corn dogs and thrill rides.

Of course, my interviews while wandering through the crowds came just as news was breaking of the H1N1 flu outbreak in the 4-H dormitory up on Machinery Hill (far from the swine barn), and no one knows if that will affect this weekend’s attendance — traditionally the biggest days of the 12-day fair.

(Health officials were quick to say yesterday that the flu outbreak shouldn’t keep anyone away from the fair, just wash your hands early and often.)

Foot-long profits
Nancy Hanson, who runs the foot-long hot dog stand outside the DNR building, said sales so far this year are “on par” with last year. She started selling foot-longs at the fair 43 years ago, but took a few years off for child-raising.

Just up the road at Ye Old Mill, owner John Keenan — family patriarch and great grandson of the 96-year-old ride’s founder — said the number of riders through his tunnel of love is ahead of last year.

“Times are tough, and it seems some people are not taking a driving vacation, but a family has to have some entertainment, right? So they’re coming to the fair,” he said.

Many folks at the fair seem to subscribe to that theory — that many Minnesotans cut back on summer vacation plans this year because of the economy, but are making up for it by splurging a bit at the fair. And there was some news this week that summer travel to resorts was down a bit.

Renae Jeno of the Hot-Dish-on-a-Stick booth said sales are good, even though Fair officials wouldn’t let her sell Norwegian Cheese Curds this year.

“It seems like people can’t take big trips this summer, but they can still come to the fair and have fun with the family,” she said.

Closer to the grandstand, At the Fried Fruit on a Stick booth, Kristin Erlandson also said sales are up.

“People are coming to the fair and they’re spending money here,” she said.

Erlandson wanted me to know that they’ve stopped using melons in their lightly battered, then fried, fruit menagerie. She remembered I’d written about the fried fruit two years ago, when it was a new fair food. She thought I’d panned it, because the melons were too watery. But they’ve perfected the recipe, sans melons, and have a great product now, she said.

I didn’t remember giving a thumbs-down to the family-run fruit stand  —  I’m a pretty up-beat guy when it comes to reviewing products — so I checked and found my review from 2007.

“And — the verdict is: pretty good. Ten pieces of fruit on a stick, lightly battered and fried. The fruits include grapes, melon, strawberries, pear, kiwi, pineapple, banana and apples. Top it off with powdered sugar or a cinnamon sugar mix.”

Thanks, Brett
The kick-off of football season, and the Vikings’ addition of Brett Favre, might be helping sales at the KFAN radio booth.

“We’re seeing an increase in sales,” said Tim Hyde, the station’s promotions manager. “Even with the economy, people still have some money to spend on $10 T-shirts. Ten dollar hats and t-shirts are our most popular items.”

Out on the Midway, amidst the games and rides, Kristin Kramer of St. Peter and daughter  Harley and son Anthony were proudly holding stuffed animals won in skill games. They’d probably spent more this year than at other fairs, she said, because it was the first time she’d taken the kids on the cash-sucking Midway.

“It’s just once a year,” said Kramer, who has a steady job, and contrary to the prevailing theory, also took a family vacation out West this year.

A little ways further on the Midway, though, was Adam Thompson of Minneapolis, who lost his security job this year.

They were spending half-a-day at the fair, and planned to have fun and eat, maybe just not as much. 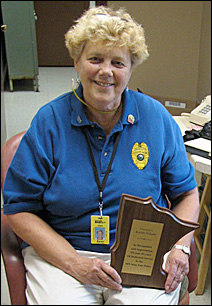 Thank you, ma’am, for 30 years
On another note, in a ceremony in the tiny police headquarters on the fairgrounds, Fair Police Chief Art Blakey congratulated Karen Nelson with a plaque for 30 years of service at the fair. She’s a retired dispatcher for the Maplewood police and St. Paul fire departments, and has worked as a dispatcher and front desk clerk at the fair since 1979.

She said she’s long been saying that she’d retire from the part-time fair gig after 30 years, but now says she has so much fun meeting people and helping them solve problems — lost kids, towed cars — that she’s not so sure.

I’m betting she’ll be back for another year.  For many of us, the fair gets in our blood and it’s impossible to stay away.

With a sour economy, Minnesotans turn to State Fair