Minnesota’s unemployment rate fell slightly during August, for the second month in a row, but it’s far too soon to throw a recovery party.

The state’s employers shed 10,300 jobs during the month, erasing gains they had scored in July, according to figures released today by the Minnesota Department of Employment and Economic Development.

“I would have been a lot happier if we had shown an increase in jobs this month,” said DEED Commissioner Dan McElroy said. “That has not happened.”

The decline in the unemployment rate — to a seasonally adjusted 8.0 percent — was largely due to workers dropping out of the labor force. State officials said they don’t know why some 6,200 Minnesotans stopped counting themselves as workers during the month.

Even though the unemployment rate dropped slightly in August on the heels of a July drop of three-tenths of a percentage point, Minnesota is not seeing the kind of trend that would signal a rebounding jobs market, McElroy said.

Reliable indicators of workplace recovery have yet to light up for Minnesota. There are no signs that workers are putting in longer hours and that employers are stepping up requests for temporary help, he said.

One bright spot in the picture is that Minnesota workers seem to be pulling slightly ahead of the nation. The national unemployment rate rose to 9.7 percent in August, up from 9.4 percent in July. And Minnesota’s over-the-year job loss is 4.3 percent, compared with the nation’s loss of 4.4 percent.

“I am encouraged to see the gap between Minnesota’s and the nation’s unemployment rates widening, suggesting that the state may experience an earlier economic rebound,” McElroy said.

The latest Minnesota numbers (below) come two days after Federal Reserve Chairman Ben Bernanke said that the recession is “very likely over.” 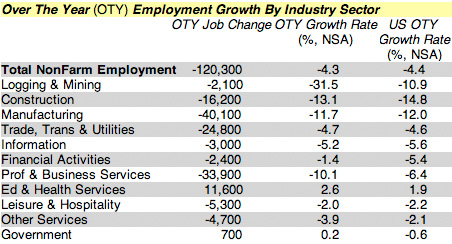 All labor force data are subject to revision. The unemployment rate is the percentage of people actively seeking work compared with those in the labor force (employed plus unemployed). Legend: NSA = Not Seasonally Adjusted; OTY = Over The Year; MSA = Metropolitan Statistical Area

His declaration is underscored this week by other economic news: The Commerce Department reported that retail sales jumped higher than expected in August. The Federal Reserve said that factories stepped up their output in August. And the Standard & Poor’s 500 stock index hit its highest level in nearly a year this week.

But Bernanke also predicted a rebound so moderate that jobs will come back slowly.

“It is still going to feel like a very weak economy for some time as many people still find their job security and their employment status is not what they wish it was,” Bernanke said during a speech at the Brookings Institution in Washington, D.C.

The speech marked the date a year after Lehman Brothers filed for the largest bankruptcy in U.S. history and set off a cascade of financial and business failures that nearly brought down the nation’s — indeed, the world’s — financial systems.

It is not surprising, though, to see a persistently dim jobs picture while other parts of the economy pick up, said Steve Hine, research director for DEED’s Labor Market Information Office. Employment typically lags other indicators on the road to recovery.

Hine also said that the decline of 6,200 workers from Minnesota employment forces during August includes about 2,800 people who had been working and 3,400 who had been looking for jobs.

Did some stop job hunting because they were discouraged? Did some who had jobs decide to retire? Don’t know, Hine said. The estimate is based on a survey with a small sample and, therefore, a relatively high chance for error. An upcoming annual summary of the state’s workforce will give a better estimate of its actual size.

Unemployment statistics are based on surveys in which people are asked whether they are working or looking for work. If the answer is no to both questions, they are counted out of the labor force.

That makes for a “funny statistic” which “could be wrong in both directions,” said Christopher Phelan, an economics professor at the University of Minnesota who also does research for the Federal Reserve Bank of Minneapolis. It doesn’t tell why people aren’t looking for work – whether, for example, someone decided to be a stay-at-home parent. It also doesn’t tell us how hard someone might be looking.

Better measures are the rates and numbers of people actually working. Compared with August 2008, Minnesota is down 120,300 jobs (not seasonally adjusted), showing the state’s economy has a good way to go toward recovery.

Another telling measure would be population – whether people actually are leaving the state to seek better prospects elsewhere, Phelan said. There is anecdotal evidence that some northern Minnesotans who lost jobs in forest products plants are commuting long distance to jobs in North Dakota and elsewhere. But firm numbers on short-term population shifts are not available and only time will tell whether those commuters truly pick up and leave the state.

The decline is the third in the past four weeks, the AP said. The four-week average, which smoothes out fluctuations, dropped 8,750 to 563,000. That’s still far above the 325,000 per week typical in a healthy economy.

Still, the number of people claiming benefits for more than a week rose by 129,000 to a seasonally adjusted 6.2 million.

Summer at the beach?
One interesting group of workers hit by the recession’s heavy blow on jobs is teenagers. Not surprisingly, summer jobs were scarce for them. But a fascinating new report from the Federal Reserve Bank of Minneapolis says that teen labor was falling anyway.

“It would be wrong to conclude that the downward trend in teen labor participation is a result of the recession,” said Ronald A. Wirtz in the September issue of the Fedgazette. “It’s more accurate to say the recession has compounded a long-running trend. Teen labor force participation, which counts both workers and those actively seeking a job, has fallen across the United States for about 15 years. But the rate has dropped much more steeply since 2000.”

Of course, teens in the Fed’s five-state Upper Midwestern district work harder than their nationwide counterparts.

“Labor force participation in North Dakota is near 60 percent; in Montana, it’s about 45 percent,” he said. “But each state in the district (including all of Wisconsin) has experienced a general decline in its teen labor participation, though to varying degrees. Minnesota, Montana, South Dakota and Wisconsin all saw drops of at least 10 percentage points from 1994 to 2009, with Minnesota seeing the largest drop, from 71 percent to less than 55 percent.”

Details of the August picture
Look deeper into the jobs picture for Minnesota in August and you see a mixture of gains and losses. Three of the state’s 11 industry sectors gained employment during the month, DEED reported. The strongest sector was professional and business services, which added 1,300 jobs. Gains also were seen in other services and in the information sector.

Over the past year, education and health services added 11,600 jobs and government added 700 jobs.

Update: Minnesota’s unemployment rate falls, but we’re not out of the woods yet