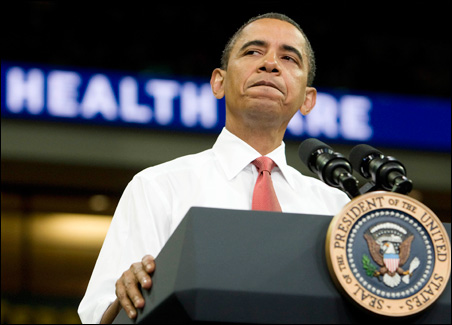 REUTERS/Larry Downing
President Barack Obama, who spoke Thursday at a Maryland rally, downplays any racism overtones from critics of his policies, but others, including former President Jimmy Carter, are concerned about the tenor of the debate.

The conversation I had earlier this week was about anger in American politics.

I had a theory that I tried on a young Republican state legislator.

The legislator was startled.

“I don’t know how you can possibly make that comparison,” she said. “I don’t think Obama is even a good speaker. I think he comes across as condescending and uppity.”

I did a double take and made a mistake.  In a moment of compassion, I told the legislator I wouldn’t use her name.

“I’m going to do you a favor and not use your name, because maybe you’re too young to know the full context of that word ‘uppity,’ ” I said. “The second half of that phrase was ‘nigger.’ Back in the 1960s — and before that — any time an African-American was making progress in our society, there were people who described that person as an ‘uppity nigger.’ ”

“Hadn’t heard that one,” the legislator said without batting an eye.

Where’s the line?
How do you separate race and rage in the current political climate?

The New York Times this week published a piece that grew out of comments made by former President Jimmy Carter in an interview on NBC.

Visit msnbc.com for Breaking News, World News, and News about the Economy

“I’ve seen the South come a long way, and I’ve seen the rest of the country that shared the South’s attitude toward minority groups at that time, particularly African-Americans,” Carter said. “And that racism inclination still exists. And I think it’s bubbled up to the surface because of the belief of many white people, not just in the South but in the rest of the country, that African-Americans are not qualified to lead this great country. It’s an abominable circumstance, and it grieves and concerns me very deeply.”

The head of the Republican National Committee, Michael Steele, who is black, was quoted in the Times as saying the Carter comments were “a pathetic distraction by Democrats to shift attention away from the president’s wildly unpopular government-run health care plan.”

So, that leaves us with a debate over where the proper line is between expressing anger over policy and displaying racism. 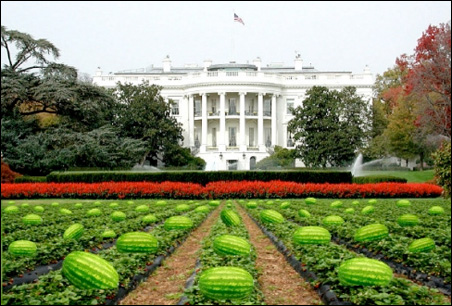 Los Alamitos, Calif., Mayor Dean Grose resigned in March after being criticized for sharing an e-mail picture depicting the White House lawn planted with watermelons under the title “No Easter egg hunt this year.”

Comparing today’s anger and that in the ’60s
Many of us whose politics were formed in the 1960s can recall the rage we felt every time President Lyndon Johnson would  utter the words, “My fellow Americans …,” and then announce  another expansion of the war in Vietnam. We understand that it’s possible to be outraged over policy without race being a factor.

Is this anger different?

Yes, said Hy Berman, a retired University of Minnesota history professor. And yes, said Minneapolis City Council Member Ralph Remington, who is black. And yes, said Josie Johnson, a quiet-spoken but powerful civil rights activist who also is black. (Peter Bell, head of the Met Council and perhaps the state’s most prominent black conservative, said through a spokesman that he “didn’t have time” to talk about this subject.)

Josie Johnson, who was a delegate to the Democratic National Convention, wept with joy on the night that Obama accepted his party’s nomination. Now she’s on the verge of weeping again — for an entirely different reason.

“I feel deeply wounded,” she said. “I think of all the people who died for liberty and justice, and here we are in 2009. We have a president who followed all the rules. He is well educated and has a wonderful family, but here we are with a group of people who feel free to carry guns to public meetings, who feel free to draw these terrible pictures of our president, who talk about monkeys. Why isn’t America outraged?” 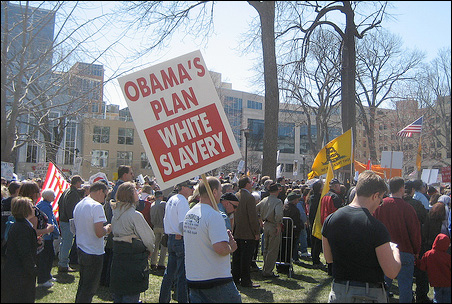 Johnson, Remington and Berman all point to the recent “you lie” moment of U.S. Rep. Joe Wilson as a classic example of how contemporary rage has crossed a line. Wilson’s outburst, of course, came when the president was addressing the full House and Senate.

“Nobody has ever said what Joe Wilson said before, and we have seen some liars before,” Remington said. “But now there is Obama. He’s not even lying, and we have this white male, full of Southern privilege, who feels free to shout that out.”

What compounds the deep sense of frustration of the Wilson outburst to Remington and Johnson is that he’s now being portrayed as heroic by many.

To make matters worse, Johnson said, is the fact that the institutions that once would have blasted Wilson for his behavior, that once would have pointed a huge spotlight on some of the blatantly threatening and racist actions of some at recent rallies, have been silent.

“Until Maureen Dowd wrote that column for the New York Times (in which she labeled Wilson’s outburst racist), the media was silent,” she said. “The Republican Party has been silent. What happened to that once-great party? How did they allow people like Rush Limbaugh to become one of their leaders.” 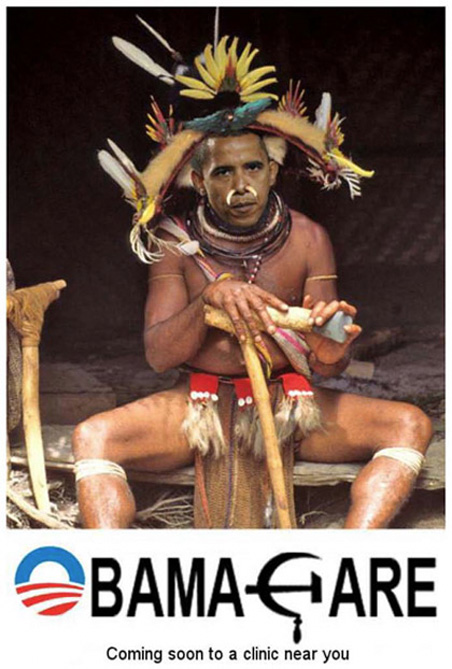 Talking Points Memo reports that St. Petersburg neurosurgeon and conservative activist David McKalip forwarded this image to fellow members of a Google listserv affiliated with the Tea Party movement. Above it, he wrote: “Funny stuff.”

All of it, Remington believes — the “race card” retort, the signs, the outbursts by congressmen, the passions being stirred on right-wing radio and television programs — must be “called out.”

This is not to say that all people who disagree with the president on any given policy are racist, Remington said.

“In percentage terms, that may not seem like much,” said Remington, but we’re talking a huge number of people.”

What frightens Remington and Johnson is that this group now has a group of either manipulators or bigots in the media giving legitimacy to their beliefs.

Again, there is a difference between anger toward policy and toward race.

“They are all tangled up,” said Berman, “and it’s very difficult to untangle. … Many were angry at [President George W.] Bush. We knew he was lying through his teeth about the weapons of mass destruction. But nobody thought of shouting out, ‘You lie!’ when he was speaking to the Congress. It’s not by accident those words came out of the mouth of a South Carolinian and that we have a black president.”

The so-called conservative media are playing a role in fanning the flames, Berman said. High unemployment and the unpopular bailouts of Wall Street also are in the mix. In fact, the populist anger isn’t so much directed at efforts at health care reform as it is the bailouts, Berman believes. 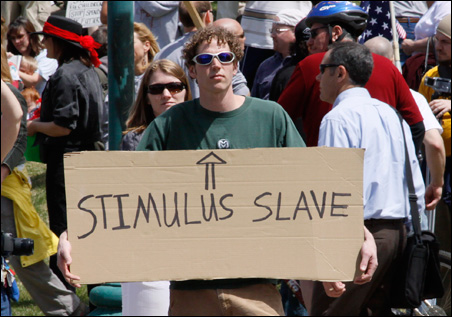 REUTERS/Rick Wilking
Protesters waved signs raising the slavery issue at an April 15 “tea party” protest on the grounds of the Colorado state Capitol in Denver.

“You mix those things together, with Fox News and Limbaugh, a black president, it becomes very explosive,” Berman said.

It’s not just the right that is angry at Obama, Berman said. The left has issues, too.

“He’s not pulling out of Iraq fast enough, the war in Afghanistan is expanding, there is no discussion of a single-payer health system,” Berman said. “All of those things upset the left. But those are about policy. The anger from the right is visceral.”

I asked Berman and Johnson about my conversation with the state legislator who used the term “uppity.”

Is it possible she didn’t know the context?

“Maybe she didn’t know it consciously,” Berman said. “But that only shows that it’s deeply engrained in the cultural psyche.”

Johnson was saddened when she heard that a legislator had used the term.

“If she didn’t understand it,” Johnson said, “it shows that we have failed as a nation to continue to teach our history.”

Where’s the line between anger over policy differences and racist remarks?