WASHINGTON, D.C. — One year ahead of the 2010 congressional elections, Minnesota Republicans Michele Bachmann and Erik Paulsen — both targeted as vulnerable by the Democratic Congressional Campaign Committee — are setting the pace for fundraising in the state.

Bachmann, who is already facing two Democratic challengers in the 6th District, led the Minnesota House delegation this quarter with $345,133 in campaign contributions. Around 91 percent of this money came from individuals while only about 9 percent came from special interest political action committees (PACS).

The third quarter runs from the beginning of July through the end of September.

This number does not include the $121,000 that Bachmann’s campaign says the congresswoman has already raised since the launch of her “Send a Message to the Left” campaign on Wednesday.

Meanwhile, Paulsen — still without an official challenger in the 3rd District —  came in a close second this quarter behind Bachmann’s fundraising juggernaut with $317,641 in contributions.

Bachmann and Paulsen have led the Minnesota House delegation in fundraising for the entire year with Bachmann leading in the first quarter and Paulsen leading in the second. As of the third quarter, Paulsen reportedly had $725,220 left in the bank, while Bachmann had $616,871.

Democratic Rep. Jim Oberstar and Republican Rep. John Kline were the next strongest fundraisers among Minnesota’s House delegation this quarter. Both congressmen, who are not considered vulnerable in the next election, brought in about $192,000. They were followed by Democratic Reps. Betty McCollum, Keith Ellison, Tim Walz and Collin Peterson. 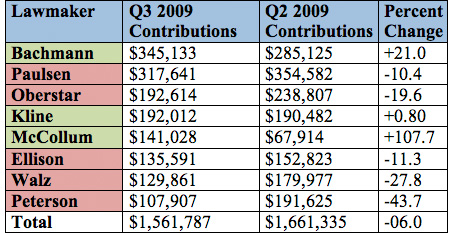 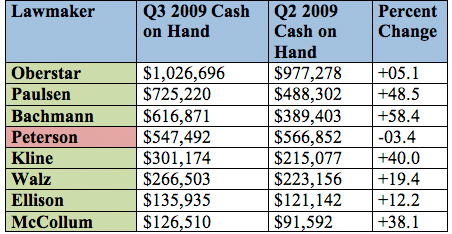 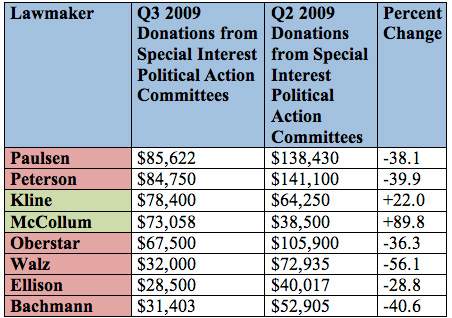