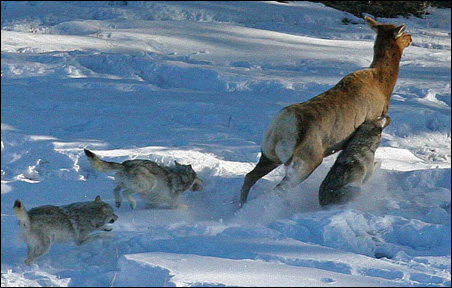 Photo by Daniel Stahler
Wolves run in hot pursuit of an elk.

In life, 527F was reclusive — even for an alpha-female wolf. Her territory was so remote that researchers studying wolves in Yellowstone National Park rarely saw her. But they knew a lot about her because for five years she wore a radio collar disclosing her travels, her mating and her kills.

In death, though, 527F is making an uncharacteristic publicity splash.

A hunter shot 527F on Oct. 3. She had strayed nearly a mile outside of Yellowstone into the Absaroka-Beartooth Wilderness, where Montana had opened its first legal wolf-hunting season in decades. In all, four of the 10 Northern Rocky Mountain gray wolves in Yellowstone’s Cottonwood Pack, including one other radio-collared female, were shot.

The loss of 527F leaves a hole in research that had been under way at the University of Minnesota and elsewhere, said Daniel MacNulty, a U of M research associate.

“The gold standard in studies of animals in the wild is being able to repeatedly measure the same individual over time,” MacNulty said.

Knock out one or more of those individuals from a study, and years of work documenting behavior from reproduction to hunting success also is lost.

The re-introduction of wolves in Yellowstone in 1995 provided an unprecedented opportunity for such studies. Relatively large numbers of wolves could live there through natural life spans that weren’t disrupted by hunting and other outside pressures.

Minnesota-style tensions visit Montana
Minnesotans know full well the parameters of the tension that came with the re-introduction of wolves, though. Advocates for the hunting insist it is needed to curb wolf attacks on livestock. Montana has an estimated 550 wolves. It has set a quota for this year, allowing hunters to take 15 percent of them.

“Those wolves they’re talking about in Yellowstone are all over the place out here. They’re traveling everywhere,” said Counts, a hunting guide and team-rope rodeo rider from the town of Pray, Mont.

“They’re just decimating our elk herd and everything else. They’re bothering cows all the time,” Counts said.

In Dillon, Mont., 180 miles northwest of Yellowstone, a rancher in late August found the carcasses of 122 purebred adult sheep strewn in bloody heaps in his pasture, the Times reported. It was the worst livestock predation in memory — an example of the ability of wolves to kill for the pure pleasure of it — and wildlife officials authorized the killing of the entire pack.

Yellowstone Park continues to be off limits for hunters even as states open limited wolf-hunting seasons nearby. But the loss of 527F and her pack mates from Yellowstone prompted Montana wildlife commissioners to shut down early season wolf hunting adjacent to the park, the Missoulian newspaper reported.

“Members of the commission and state wildlife managers have acknowledged a mistake in the decision to open early season hunting next to Yellowstone,” the newspaper said.

At the same time, Montana officials downplayed the impact on the state’s much-studied wolves.

“They’ve characterized it as a ‘learning experience’ with no long-term impact to wolves,” the newspaper reported.

Sharp disagreement with that conclusion comes this week from journal Science, a publication of the American Association for the Advancement of Science.

The Yellowstone wolf project, partially funded by a $480,000, five-year National Science Foundation grant, isn’t the only study adversely affected by the hunting, Science says. The slaughter of the Yellowstone wolves also is a blow to a host of studies into elk management, ecology and other subjects.

Big bad wolves? Not the old ones
A study MacNulty and his colleagues at the U of M have just completed is an example of the kind of research Science says could be jeopardized. The research team is from the College of Biological Sciences’ Department of Ecology, Evolution and Behavior at the university. MacNulty also is connected with Michigan Technological University in Houghton where scientists study wolves on Isle Royale National Park.

Their study, to be reported in the December issue of the journal Ecology Letters, helps explain the pressures on elk in Yellowstone. 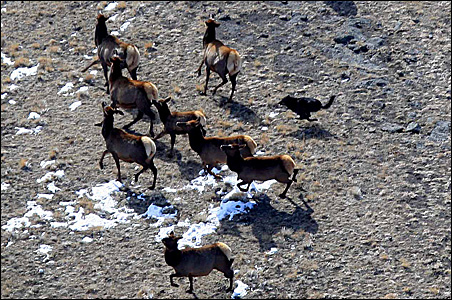 Photo by Daniel Stahler
A gray wolf closes in on an elk herd.

It is well known that wolves prey on elk. This is one of the first field studies to gauge whether age of the wolves makes any difference. The researchers spent more than 13 years following 527F and dozens of other radio-collared wolves, observing their hunts from airplanes and taking various measures of their physical abilities.

Their findings in a nutshell: Wild wolves — like great human sprinters, NBA stars and competitive swimmers — need to score while they are young, because they peak early.

“By age one, they are quite effective hunters,” MacNulty said. “Wolves don’t live very long so there is a lot of pressure from an evolutionary standpoint to quickly develop an ability to hunt in order to feed themselves and their offspring.”

Unlike mountain lions — with their short snouts, powerful muscles and retractable claws — wolves need speed to bring down their prey.

“They lack physical characteristics to kill prey swiftly, so they rely on athletic ability and endurance, which diminishes with age,” MacNulty said. “They’re like 100-meter sprinters. They need to be in top condition to perform.”

Although most wolves in Yellowstone live for about six years, their killing ability peaks when they are two to three years old, the U of M team found. After that, they rely on younger wolves to share their kills.

In other words, the higher the proportion of wolves older than three, the lower the rate at which they kill elk.

Blaming bears and drought
Elk had been declining for years in Yellowstone. Not surprisingly, hunters and game management experts had blamed the wolves.

This study’s findings expose a flaw in that logic, ScienceNOW Daily News reported.

“Most managers who want to boost numbers of elk and deer think all you need to do is kill wolves,” ecologist Christopher Wilmers of the University of California, Santa Cruz told ScienceNOW. “But this study shows you’re probably increasing your problem, since you’ll end up with younger wolves that kill more prey.”

That’s because when a pack vanishes or is weakened and loses its territory, he says, younger wolves often move in.

Still, that logic leaves questions of what else could explain the elk decline. MacNulty looks to drought and grizzly bears.

“Grizzlies are the primary predator of elk calves,” he said. “That is only now becoming widely appreciated. … Also, climate is a major factor. Up until a couple of years ago there were a series of droughts which impacted summer forage for elk.”

Gunning them down with tranquilizers
It’s too soon to predict the overall effect hunting will have on the Yellowstone wolf studies, MacNulty said. His team is lucky in that this particular research project was completed before 527F was killed. But many other studies also are geared toward wolves living natural life spans.

One immediate impact on the research is to reduce the ranks of available radio-collared wolves. Replacing those that were shot is dangerous and expensive work. Researchers locate a pack from a fixed-wing aircraft then send a helicopter with a “gunner” who darts a wolf with a tranquilizer.

Once the wolf drops, the chopper sets down. In addition to collaring the wolf, researchers measure its size, take blood samples and perform other tests. DNA samples are used to monitor genetic diversity in the wolf populations.

Scientists have tried to keep at least one or two collars in each of the park’s 12 wolf packs. And the oldest wolves are the most valuable for the research.

“The longer an individual lives the more data you can accumulate,” MacNulty said.

That’s one reason 527F’s killing set off alarms. She had been collared for five of her seven years — an exceptionally long time for a single wolf to be studied.

Calling for a buffer zone
Now scientists are lobbying Montana’s Fish, Wildlife and Parks (FWP) department to establish a no-wolf-hunting zone around the park.

“A possible buffer zone and other suggestions will be considered as they review this season’s hunt,” FWP officials told Science.

But some wildlife officials downplayed the setback to wildlife studies, saying that the more than 100 wolves left in the park should be sufficient for research.

“Biologically, [the loss] has no impact, since wolf packs turn over all the time,” Edward Bangs, wolf recovery coordinator for the U.S. Fish and Wildlife Service in Helena told Science. “It doesn’t make any difference to wolf conservation or wolf research.”

Still, officials acknowledged they miscalculated the impact on the Yellowstone wolves.

“We didn’t think that wolves would be that vulnerable in the backcountry, so the level of harvest there has been a bit of a surprise,” said Carolyn Sime, FWP’s wolf program coordinator in Helena.

Death of a wolf raises questions about research