WASHINGTON, D.C. — Health care reform cleared a major hurdle today when a bill sailed through its last congressional committee, but Sens. Amy Klobuchar and Al Franken say they would like to see key changes in the legislation before it becomes law.

As expected, the $829 billion bill easily passed the Senate Finance Committee this afternoon on a 14-to-9 vote. Despite exhaustive talk of bipartisanship by panel Chairman Max Baucus, however, Sen. Olympia Snowe of Maine was the only Republican to support it.

“I think there are really good parts of the bill, and I think there are things that we are going to work on in the melding of the two [Senate bills],” said Franken, who sits on the Senate Health Committee, which passed its version of the bill this summer.

Klobuchar, who spoke with Snowe about the bill last weekend, agreed.

“First, I think it was very significant that Senator Snowe voted to move this bill to the floor …,” she told MinnPost. “[But] second, there is still work that needs to be done on this bill.” 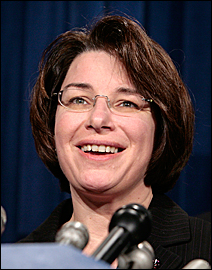 Klobuchar said that the effects of Medicaid expansion on states like Minnesota, which has a lower qualification threshold than other states, have to be taken into consideration. In addition, she said the proposed tax on the medical device industry, which has a large business presence in Minnesota, also needs to be reduced.

Franken, meanwhile, said that he is still concerned about employer responsibility requirements in the Senate Finance bill that some experts have said will discourage the hiring of low- and moderate-income people. Franken said he also would like to see his proposed measures on the health insurance industry included.

One, which already exists in the House health care bills, would require that 90 percent of every premium dollar spent on health insurance go to actual health services, as opposed to administrative costs.

The other measure would end tax breaks for pharmaceutical companies’ advertising and marketing campaigns.

Although the Finance Committee’s version of the legislation does not include the controversial government-run public option, Franken, a consistent supporter of such a provision, said that he would like to see it added to the final bill.

But, today, the idea remained as controversial as ever. 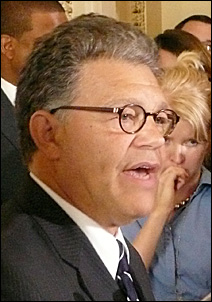 Snowe and even some Democrats on the Finance Committee still appear to oppose its inclusion. Meanwhile, House Majority Leader Nancy Pelosi of California said that the House would still pass a bill with the option.

“I am for the public option. That will be the House position, and that will be the position we will go to the conference to fight for,” Pelosi said today, according to CNN.

Franken and Klobuchar, however, suggested that there might be an intermediate position that could attract the necessary votes in the Senate.

“I think there are ways to get at it,” Franken said, mentioning the previously suggested “opt-out” plan for states that don’t want to participate.

The leaders of the Health, Finance and Banking committees now will sit down with Senate Majority Leader Harry Reid of Nevada and White House Chief of Staff Rahm Emanuel to resolve the differences between the bills.

Leaders in the House are also working to merge three bills on their side but have hinted that they would like the Senate to act first.

“This is an enormous step today,” Franken said. “I am very glad that Olympia signed on, and I am very optimistic that we are going to get meaningful health care reform that will bring down the cost curve so we won’t continue along this unsustainable path that will ruin us.”