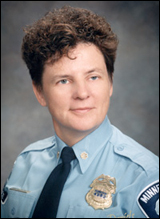 “Assistant Chief Lubinski has dedicated her career to the noble cause of protecting her fellow Americans,” Obama said in a statement. “She has displayed exceptional courage in the pursuit of justice, and I am honored to nominate her today to continue her selfless work as a U.S. Marshal for the District of Minnesota.”

Minnesota’s senior Sen. Amy Klobuchar, who recommended Lubinski, also lauded the nomination.
“Sharon Lubinski’s mix of experience managing a large, urban police department and working in a more rural sheriff’s office sets her apart and makes her uniquely qualified to serve in this new role,” said Klobuchar in a statement. “During my eight years as Hennepin County Attorney, I had the opportunity to work with Sharon on an almost daily basis. I observed firsthand the strength of her leadership abilities and the respect she commands from people at every level of law enforcement and in the larger community.”

Lubinski, who must still be confirmed by the Senate, said today that the position would “be a great honor.”

“During my 30-year career, I’ve actively partnered with federal law enforcement agencies in many different capacities,” Lubinski said in a statement. “The U.S. Marshal has a uniquely important role as the chief enforcement officer of the federal courts, charged with ensuring the safety and effective functioning of our justice system.”

The U.S. Marshals Service operates within the U.S. Department of Justice and is charged with such duties as protecting court officials and buildings, apprehending fugitives and protecting federal witnesses.