WASHINGTON, D.C. — The number of Minnesotans without health insurance could increase to 655,000 in 10 years and the cost to those with insurance could jump by 74 percent if Congress does not pass health care reform legislation, according to a new study [PDF] by the Robert Wood Johnson Foundation.

The report, which produced state-by-state and national estimates, projected dramatic effects on workers and families in the coming decade if changes are not made to the current system.

Out of all the states, Minnesota would see the smallest increase in uninsured partly because the state’s threshold for Medicaid eligibility is higher than other states. At the same time, however, Medicaid spending could increase by 127.5 percent as more people join the rolls, according to the study.

Changes in coverage across years, non-elderly population (in thousands) 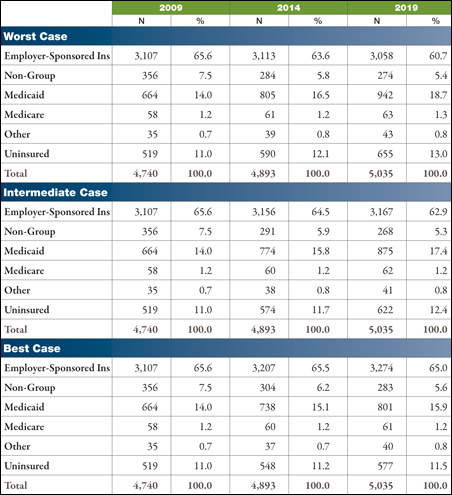 “We hear a lot about the political toll of health reform, but the cost of failing to reform our health care system will be felt most strongly by our state governments, our communities, and most importantly, our families and neighbors,” Risa Lavizzo-Mourey, president and CEO of the Robert Wood Johnson Foundation, said in a statement. “Now is the time to act, because delaying reform makes the problem worse.”

Nationwide, Lavizzo-Mourey said that the cost to American businesses for their workers’ health care could double. The study also reported that the number of uninsured Americans could reach almost 66 million and individual and family spending on health care would jump 46 to 68 percent, with middle-class families hardest hit.

“The consequences would be blind to politics and felt by Democrats, Republicans and independents alike,” said Lavizzo-Mourey.

The study made projections for all the states based on these worst, immediate and best-case scenarios: 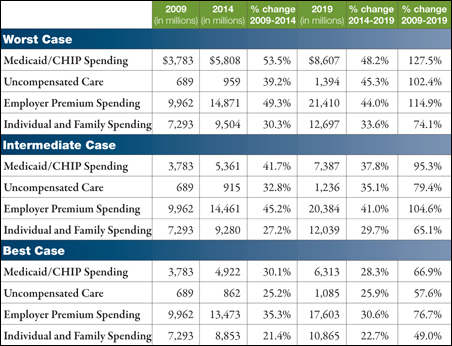 Even under Minnesota’s best-case scenario, 577,000 more people would become uninsured in 10 years and the cost to those with insurance would increase by 49 percent.

“When people are thinking about health care reform, they are comparing it to what they have now,” said Bowen Garrett, a senior research associate at the Urban Institute’s Health Policy Center and the lead author of the study. “The problem is that what many people have now they are going to lose.”

Minnesotans without health insurance could rise to 655,000 in 10 years, study finds