The longest and deepest recession since World War II may be history by several measures, but Minnesota’s economy, as measured by state revenues, still is living the struggle.

The state’s sales tax receipts for the quarter ending Sept. 30 were 13.5 percent below the sums received for the same quarter last year, according to an economic update [PDF] issued Monday by the office of Minnesota Management & Budget.

Individual income tax withholding, which closely tracks wages, was down 7 percent from a year earlier. Corporate returns were down sharply, too.

“We may have stopped sliding downhill,” said State Economist Tom Stinson. “But these figures tell us that this has been a very difficult time for the Minnesota economy. … These are pretty big hits.”

Reasons for hope, though, are emerging on several fronts:

• Prospective home buyers, enticed by federal tax credits and rock-bottom interest rates, signed nearly 5,000 purchase agreements in September, up 23.5 percent from a year earlier, according to the Minneapolis Area Association of REALTORS.

• Motor vehicle sales tax receipts for July through September spurted high above budgeted projections — thanks, no doubt, to the federal government’s “cash for clunkers” program.

But Minnesota can’t breathe easy until the private sector stops shedding jobs, until wages start growing rather than shrinking, until shoppers put to rest their fear and hit the malls again — until the state’s economy can stand on its own without life support from Washington.

Going in the wrong direction
Monday’s economic update also showed that state revenues are running behind projections set in February. The full impact on Minnesota’s fiscal picture won’t be known until a comprehensive forecast comes in December.

In all, Stinson said, revenues are about $200 million short for the year. That’s not an eye-popping sum, considering that the state faced a shortfall of $4.8 billion at the start of this year’s budget process.

But it’s safe to say that everyone in Minnesota would like to see any discrepancies start going in the other direction.

“We thought we had a very pessimistic assessment when we finished the forecast in February, and we are actually running worse than that assessment,” said Sen. Majority Leader Larry Pogemiller, DFL-Minneapolis.

“This is not very good news, but it is unclear how bad the news is until we see another quarter,” he said.

If the trend continues, the state’s already bruised budget is likely to take further cuts next year, Pogemiller said.

In response to shortfalls this year, Gov. Tim Pawlenty cut nearly $3 billion in state spending through a controversial “unallottment” process, wiping out funding for some programs entirely. The governor’s office did not respond to a request for comment on Monday’s economic update, but other experts agreed the state may need to brace for more belt tightening.

Squeezing rather than cutting
The severe economic contraction outlined in Monday’s update makes further cutbacks in state offices almost inevitable, said David Vang, chairman of the Finance Department in the Opus College of Business at the University of St. Thomas.

“There has been such a huge change in the economy from last year to this year,” Vang said, that the state has yet to fully adjust.

“Some draconian one-time measures will likely be taken in some departments,” he predicted.

Minnesotans could see more big programs slashed entirely, Vang said, but state officials are more likely to use a scalpel than an ax next time around because “it is politically easier to squeeze” here and there. 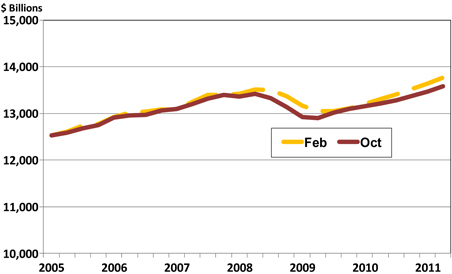 Yes, but isn’t the recession over? When Federal Reserve Chairman Ben Bernanke and other prominent economists say the recession has ended, they mean they don’t see things getting worse, Vang said.

“We could expect some economic growth from this point forward, but employment always lags — and that, in turn, means that income tax revenues will lag,” he said. “We might see some growth next year, but it is probably going to be very slow.”

Turning the mirror around
Another way to look at the state’s latest economic update is to see its reflection of our collective abilities to earn taxable incomes and buy goods that generate sales taxes.

The view from that perspective is likely to remain bleak for some time to come, said Elizabeth Peterson, director of research and planning for Greater Twin Cities United Way.

Because unemployment almost surely will rise even while recovery starts, “everything is going to be lagging,” she said.

“Sales taxes will be lagging because people still are afraid they are going to lose jobs,” she said. “Wages are going to be stagnant. It’s not pretty.”

It’s particularly ugly for at least one in 10 Minnesotans who are unemployed or underemployed at lousy part-time jobs. They are fighting grim, gut-wrenching hardship that many of their families never have seen before.

They are flocking to food shelves, putting off health care and bunking with relatives.

About half of Minnesotans are buying less food, according to a Northwest Area Foundation survey reported in September. And nearly half had lent money to family and friends.

More than one-fourth of those surveyed said they had problems paying for such basic necessities as mortgages, rent and heating. Twenty-three percent have had a friend or family member stay with them because money was short. And 32 percent had trouble affording health care.

By a national measure, nearly 36 million people nationwide received federal nutritional assistance in July this year (the most recent month reported), up from 29 million a year earlier.

“Food is one of the most flexible things in people’s budgets,” said Peterson at United Way. “Mortgage or rent tends to come first because you have to have a roof over your head, especially when you live in Minnesota and you get snow in October … As for outstanding bills, they juggle those — pay a little of this, pay a little of that and try to keep the creditors as happy as possible.”

Jobs recovery for U.S. will be slow 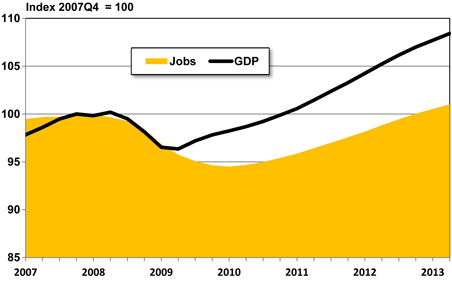 But those strategies go only so far, and many more families are sleeping in homeless shelters. Hennepin and Ramsey county shelters provided 9 percent more shelter this summer than they had a year earlier, Peterson reported [PDF] in a recent economic assessment.

One striking difference in this recession, compared with other economic downturns, is that many people are seeking assistance for the first time.

“What we’re hearing in particular from food shelves is that people who used to contribute are now coming in as clients,” Peterson said. “It is very difficult for those people who used to be in a position to give and now are going to these same charities to receive. … They are not as familiar with social services, and they often require a lot more assistance in navigating what can be a very complex sector.”

United Way’s 2-1-1 help lines received about 13 calls a day for the first half of this year from people who had never called before but had recently lost a job or had a family member lose one. (The confidential help line connects callers with more than 40,000 community resources covering food, child care, transportation, housing and other needs. More information is here.)

Almost 12,000 jobs from stimulus funds
Meanwhile, state officials reported separately on Monday that more than $1.6 billion in federal American Recovery and Reinvestment Act funds have been received and spent in Minnesota.

Many argue that’s a slow start for the program that was to help quickly heal the economy. Even so, state officials estimate the stimulus funds have created or retained 11,800 jobs in Minnesota.

Minnesota Management & Budget officials expect eventually to receive a total of $4.7 billion for state-run programs. And the economy should benefit further from another $4.2 billion in income tax benefits pledged to individuals in Minnesota.

“I’m pleased to report that Minnesota has met that challenge,” he said.

The figures are preliminary, the report said. If anything, though, the federal stimulus program’s total impact on the state may be higher because this report does not reflect the effects of money awarded directly to cities, counties and individuals. It also leaves out Medicaid matching funds.

(More information about federal stimulus spending can be found on MMB’s website or the federal site.)