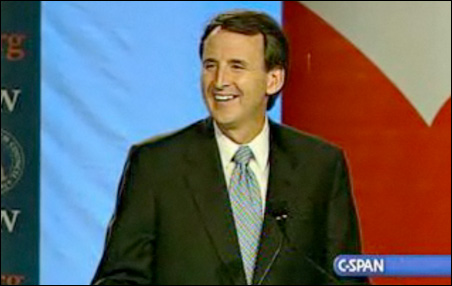 cspan.org
A screen shot of Gov. Tim Pawlenty during his speech to the Values Voter Summit.

As he raises his national visibility with speeches, television appearances and other public statements, speculation grows that Gov. Tim Pawlenty will run for president in 2012. This is one of an occasional series of articles that examine Pawlenty’s statements about his work in Minnesota and topics of national interest.

WASHINGTON, D.C. — As a Republican governor from a state with a Democrat-controlled legislature that has swung left in the last nine presidential elections, Minnesota’s Tim Pawlenty has repeatedly tried to reinforce his conservative credentials in recent speeches he has made across the country.

Just this month in a speech to social conservatives in Washington, D.C., for example, Pawlenty emphasized his work to balance the state budget and the numerous vetoes he has made as governor.

But in an effort to present himself as a cool-headed conservative bent on straightening out a left-leaning state, Pawlenty misrepresented his veto record and omitted some key facts about this year’s budget realignment.

“So, in Minnesota in this budget, by way of example, we’re reducing spending in real terms 7.6 percent.  I’ve got the most vetoes of any governor I think in Minnesota history.  And we’ve reduced spending by the largest margin in the modern history of the state, and we’re turning that left-of-center state into a fiscally responsible state.”

Truthfulness rating: True on the budget figures, but false on the veto claim

Pawlenty’s statements about this year’s budget are true. But he fails to provide valuable context by omitting that a significant portion of the spending reductions are achieved through payment shifts and one-time money installments from the federal stimulus package.

On the veto issue, Pawlenty does not have the most vetoes of any governor in Minnesota history, according to the Minnesota Legislative Reference Library. At this point in Pawlenty’s governorship, that distinction goes to former Gov. Arne Carlson, also a Republican.

Analysis of budget statements
According to the state’s Department of Management and Budget, spending has been reduced by 7.6 percent, or $2.59 billion, in the current budget. Both Mark Haveman, executive director of the conservative Minnesota Taxpayers Association, and Nan Madden, director of the progressive Minnesota Budget Project, agree with this figure.

The Minnesota Taxpayers Association also agrees with the governor’s historical perspective when he says, “we’ve reduced spending by the largest margin in the modern history of the state.”

“With regard to spending reductions, the governor is right, as least as far back as 1970,” wrote Aaron Twait, research director for the Minnesota Taxpayers Association. “… The state had relatively small spending reductions (or very low rates of growth) in the early 1980s and again in the early 2000s; but nothing like what is predicted for the upcoming biennium.”

Haveman said that even though inflation ran rampant in the recession of the 1980s, state income tax revenues at the time would have gone a long way to canceling out the impact of inflation in Minnesota.

“We had serious state income tax revenues coming in during that time, it was a cash machine,” Haveman said.

“I really, really doubt [that we would have seen less spending during those years because]… I think the revenue system largely kept up with it.”

Haveman added that he couldn’t speak to conditions during the Great Depression, “which might be the only time the current circumstances have been given a run for the money.”

But when Pawlenty says “we’re turning a left-of-center state into a fiscally responsible state,” things get a little blurrier, according to Haveman and Madden.

“Fiscal responsibility, in this context, is a very political issue,” Haveman said.

“Clearly the Democrats would say, ‘No, we are obviously falling behind significantly in public spending that is important to the state and not keeping up with the inflationary costs,” said Haveman. “And the governor is making the argument that we have to start being real and keeping our spending in line with revenues that we are bringing into the state.”

Madden added that Pawlenty also left out valuable information by failing to specify that many of the spending reductions were achieved through deferred payments and one-time federal dollars received through the stimulus package.

“$1.8 billion of the savings is from shifting when school districts get their money, and these figures also include the temporary impact of federal recovery funds, which allow the state to temporarily reduce its funding in certain areas and replace them with federal dollars,” Madden said.

“I am certainly not faulting the governor for using those federal dollars,” said Madden. “The issue is that there is no plan for what we are going to do in the future when those dollars go way.”

The changes, therefore, are not permanent.

“It is not a permanent solution to an ongoing revenue problem,” Madden said. “You will see a lot of changes made in this biennium popping back into place.”

In fact, in 2012-2013, the projected budget shortfall is expected to be $4.43 billion, which is close to the shortfall that the state faced in February of this year, according to Minnesota Management and Budget.

“We would argue that it is not fiscally responsible to leave a large projected budget shortfall in the next biennium [fiscal year 2012-13), which currently is the case,” said Madden.

Response from governor’s office
In response, Brian McClung, the governor’s deputy chief of staff, said that the projected $4.43 billion budget shortfall for 2012-2013 assumes that the entire K-12 payment shift be fully paid on time.

“In practice, aid payment shifts have typically been paid off over more than one budget period,” McClung wrote in an email. “If the payment shift is not repaid at that time, the shortfall would be $3.2 billion.”

Additionally, McClung said that if state spending is maintained at 2008-2009 levels, plus a small increase, the state would have a balanced budget in 2012-2013.

“DFL legislators and others who are whipping themselves into a frenzy over the state budget outlook are doing so with one purpose in mind — they want to raise taxes,” McClung wrote. “They have been desperate to raise taxes for years and now their anxiety appears to be bubbling over.”

McClung added that raising taxes was no “way to attract and keep jobs.”

But, Madden said, the fact is that state spending does not just remain flat due to factors like inflation, increased health care costs and cost-of-living adjustments.

Therefore, without increased revenues, Madden argued that it would take another massive and probably painful reordering of the budget to keep spending at 2008-2009 levels.

“It is certainly possible to do that, but it would mean a reduction in services to make that happen,” Madden said.

On that point, Haveman agreed.

“Is it possible that the [2011] Legislature will agree to hold the spending constant for another biennium?” Haveman asked. “They could agree on that, but it would likely require some extraordinary cuts.”

Analysis of veto statement
Pawlenty said that he thinks he has the most vetoes of any governor in Minnesota history. But, so far, that record is held by Arne Carlson, according to the Minnesota Legislative Reference library.

Here are the veto totals as of today:

The legislative library’s figures go back to 1939, according to reference librarian Paul Vancura.

Vancura said that while it is possible that a governor had more vetoes before 1939, it is highly unlikely because the action was simply not used very often.

“I can’t guarantee it, but it is unlikely,” Vancura said.

Response from governor’s office
MinnPost contacted Pawlenty’s office about his veto statement. A representative from the governor’s office, Christie Calvin, said Pawlenty had meant the most vetoes in one year of any governor in Minnesota history.

“The governor had the most vetoes in one year, which I believe was during the 2008 session,” Calvin wrote in an email. “That information can be found through the Legislative Reference Library.”

MinnPost went back to the Legislative Reference Library and found that it depends on how you measure vetoes.

Either way, Pawlenty did not specify in his speech that he was referring to a one-year record for full bills vetoed. Instead, he implied something much broader when he said that he thought he had the most vetoes of any governor in Minnesota history.

He does not, so MinnPost finds this statement to be false.

On Monday, MinnPost dissected statements about abortions that the governor made in his recent speech to social conservatives.