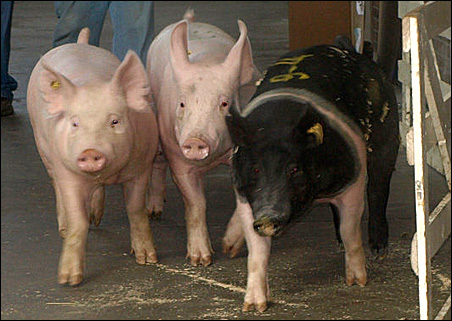 MinnPost photo by Sharon Schmickle
A pig from among ones like these at the Minnesota State Fair has been confirmed as the first U.S. case of “swine flu” in pigs.

OK. So a pig caught “swine flu” at the Minnesota State Fair this year.

No big surprise in that announcement on Monday by U.S. Agriculture Secretary Tom Vilsack.

Still, this is the first confirmed finding in a U.S. pig of the H1N1 influenza that has so many humans sneezing and shivering.

As such, it opens a window into fascinating questions of why we humans share flu viruses with pigs and birds but don’t seem to infect cats and dogs — the animals that breathe the air in our homes, steal our food scraps and often even sleep in our beds.

It was just such a question that outed this infected Minnesota pig in the first place, said Jeff Bender, a scientist working on the pig-testing project at the fair. He directs the U of M’s Center for Animal Health and Food Safety.

Bender and his Minnesota colleagues were collaborating with their counterparts at the University of Iowa in a study of influenza viruses at the human-pig interface. The purpose of the study funded by the U.S. Centers for Disease Control and Prevention was to better understand flu viruses for the benefit of humans and pigs alike.

“We were trying to understand how these viruses can move between species and to characterize that better,” Bender said.

One setting chosen for the research was fairs, where so many animals and people mingle.

This was not part of the massive global dragnet operation for the H1N1 virus. The first round of testing started last year before the outbreak of the aggressive new flu. Researchers performed DNA analysis on nasal swabs taken from pigs at the fair. They were looking for influenza. They found nothing.

This year, though, three of 103 pigs that were sampled came up positive on a preliminary test of swabs taken between Aug. 26 and Sept. 1. And one of the three did, indeed, prove to have the H1N1 virus.

“They were not sick at all,” he said.

Crossing species barriers
Experts were neither alarmed nor surprised by the finding. The infection already had been discovered in swine herds in Canada, Norway, the U.K., Argentina and several other places.

Further, it has long been known that pigs, birds and people can pass some types of influenza across species barriers.

When an influenza virus invades a body, it tries to bind with receptors – specific molecular components of the body’s cells. Once bound, the bug has a more secure platform to do its mischief in a body.

Some receptors are very similar in pigs, birds and people, said Joni Scheftel, the state public health veterinarian at the Minnesota Department of Health. So it stands to reason the virus has a better chance of leaping back and forth among those species.

Not so with our most common domestic pets.

“It does not appear that dogs and cats are susceptible,” Scheftel said.

The same is true with horses. Equine influenza infects donkeys, horses and mules but not the people who work with them. It follows that horses are not likely to catch H1N1 influenza. They lack the appropriate receptors.

And while the craze for taking Vietnamese potbelly pigs as pets seems to have passed, anyone still keeping one of them might want to watch for symptoms.

By far though, the greatest influenza risk we face comes from other people, rather than from pigs or any other animal, Scheftel said.

Mixing vessels for viruses
Crossing the species barrier is not that easy.

When it happens, though, there is one real concern. Many experts consider pigs to be a “mixing vessel” for viruses because they have receptors that can accept avian and swine flu viruses. Some say humans could be mixing vessels, too.

The “mixing” can come when a cell is infected by two similar influenza viruses. Let’s say one invader in a pig is the H1N1 virus and the other is a different flu virus not yet found in humans. RNA swaps happen. And various combinations of the original invaders can be assembled into a new virus.

In other words, H1N1 could pick up some new RNA in pig cells then come back to infect humans in a new and different form that could be more virulent than the influenza virus now circulating. Of course, it also could be less so.

The same scenario could play out in birds. It’s a reason poultry workers are urged to get flu shots and to take other precautions. Health authorities want to minimize any chances that avian and human flu viruses could combine to create new bugs.

The finding of H1N1 in the State Fair pig serves as a reminder that the same safety precautions should be taken with pigs, said Bender at the Center for Animal Health and Food Safety. People who work with swine should get flu shots, stay home when they are sick and be especially vigilant about hand washing and other sanitation.

It also may be time to develop a hog vaccine for the virus, Bender said.

But there is no reason at this point to panic – no evidence in other countries where H1N1 jumped from humans to pigs that dangerous new viruses are jumping back. When pigs do catch the flu, they typically cough, run a fever and then recover after a few days, Bender said.

Facts, logic and fear
The facts are one thing. But the public’s understanding of the flu epidemic can be quite another.

We’ve insisted on calling this bug “swine flu,” even though the H1N1 influenza virus shares elements from birds, humans and pigs.

Even less logical is the rush to reject pork in many countries around the world, despite solid scientific evidence that there is no way anyone could catch the flu by eating meat.

So it’s not surprising that the fear instilled by the State Fair pig is largely for Minnesota’s pork industry. It is a $2 billion-a-year enterprise contributing 21,500 jobs to the state’s economy, says the Minnesota Pork Board.

And the industry already was hurting before this latest news emerged.

In his announcement on Monday, Vilsack reached hard to reassure the pork industry’s overseas markets: “We have fully engaged our trading partners to remind them that several international organizations, including the World Organization for Animal Health, have advised that there is no scientific basis to restrict trade in pork and pork products,” Vilsack said.

“People cannot get this flu from eating pork or pork products. Pork is safe to eat,” he stressed.

Vilsack also said that the finding does not suggest commercial herds are infected. He said that show pigs and commercially raised pigs are in separate segments of the swine industry. (I wonder about that observation because I interviewed many pig farmers at the State Fair for a different MinnPost story, and they were very much interested in selling their pigs commercially.)

Meanwhile, Vislack also reminded swine producers that they need to take extra care with good hygiene and biosecurity in order to prevent the introduction and spread of influenza viruses in their herds. He encouraged them to participate in a USDA swine influenza virus surveillance program. More information is available here.