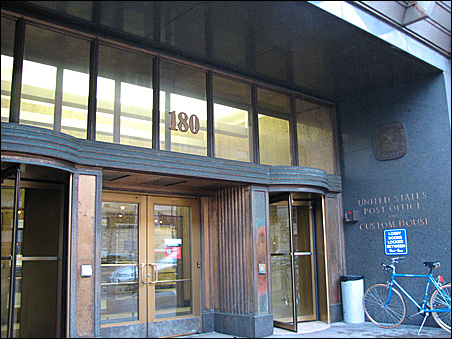 The “For Sale” signs are up, and St. Paul’s downtown Main Post Office Building – on Kellogg Boulevard, overlooking the Mississippi River – is officially on the market.

The riverfront building is the last piece of the Postal Service parcel puzzle in downtown St. Paul. Ramsey County has purchased the rest of the property in its quest to return the nearby Union Depot to its transportation roots as a train station and make it into a transit hub.

The main building – 17 stories high, with 750,000 square feet of space – will be empty when the Post Office moves its bulk mail operations to a new complex in Eagan at the end of 2010.

No official price tag for the massive art deco building has been set, says Mike Marinovich of the CB Richard Ellis firm, which is marketing the tower for the U.S. Postal Service.

But if you’re in the big-building market  –  or looking for a super-sized downtown pied-a-terre –  a possible selling price might be gleaned from a benchmark sale earlier this month when Ramsey County bought the downtown Metro Square building for the bargain-bin price of about $11 per square foot.

“That’s the low-water mark I’ve seen in 25 years of doing this,” said Marinovich, whose firm also handled that sale. 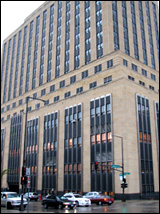 Such a rate would make the Post Office building worth about $8.25 million.

The market is tough for commercial buildings, particularly in downtown St. Paul, which had a 20.1 percent vacancy rate in the year ending Aug. 1.

And although the choice riverfront location might be perfect for housing, the building’s lower seven floors are way too large for condos. No way could you configure them to have windows for each unit. But the top 10 stories could be converted to housing, Marinovich said. “It might well lay out well for residential,” he said.

There have been some walk-throughs but no offers yet while the building was quietly marketed over the past few months, he said. In recent days, the For Sale signs went up.

The building is the last piece of Post Office holdings in downtown St. Paul.

Ramsey County has been the big player, buying other postal property around the neighboring Union Depot. The goal is to turn the depot back into a full-service transportation hub that would offer light rail, passenger train service and, some day, the proposed high-speed rail line to Chicago.

Ramsey County Commissioner Jim McDonough, the chair of the county rail authority, has said he hopes the depot will be ready for Amtrak trains by 2012, with the Central Corridor light rail line set to open in 2014.

The county’s deal with the Postal Service – worth nearly $50 million is for the depot’s rear concourse and about 9 acres of land. The depot’s lobby, though, is privately owned.

The county had planned to buy the 17-story tower, too, but that didn’t go through, in part because the Post Office wanted to keep some kind of retail Post Office presence in the building.

Besides, said McDonough, in this economy, the Post Office tower “would be just another albatross for us.”

However, the building – so close to the Union Depot, which will have new prominence, might start looking attractive to developers when light rail and train service start running, he said.

“It might be too big for many developers, who don’t want to bite off that big a piece,” he said. But, he noted, sometimes you have to take a big bite to have a chance at a big payoff.

Joe Kimball can be reached at jkimball [at] minnpost [dot] com.