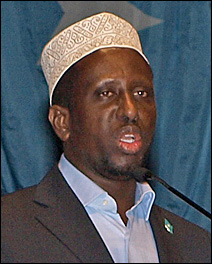 And their support is crucial right now, he said, as the new Somali government seeks international backing for its long-shot bid to repair the wreckage left from two decades of civil war and anarchy.

Chanting “Yes we can,” the Minnesota Somalis responded with a flare of rare optimism in the face of a situation that had been so hopelessly violent it tore their families apart and scattered them across the world.

Ahmed offered condolences to the families of some 20 young Minnesota Somalis who have gone to Africa and reportedly ended up fighting alongside Al-Shabaab, the militant youth insurgency linked to terrorist organizations. At least five of the men have died.

The Somali president denounced recruiters who have lured the men from Minnesota, seeming to speak directly to any who might have been listening among 2,500 people in the audience.

He said the Somali government is prepared to help the young men’s parents in any way it can.

“We ask god to guide these young people, salvage our nation and give patience to the parents,” he said.

Only so much he can do
Enthusiastic supporters waved blue and white Somali flags and repeatedly interrupted Ahmed’s speech with patriotic songs, applause and standing ovations. 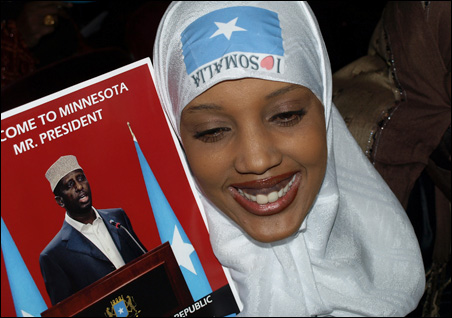 Saadia Ahmed of Bloomington was one of many in the audience who also wore the Somali colors. An image of the single-starred blue flag was stitched onto her white scarf.

Ahmed Ali of Edina sported a blue t-shirt identifying him as a volunteer helping to support the president’s visit.

Ali took a tough-minded view, though, of the odds this new president can overcome the terrible obstacles he faces.

“The problem is that this is not up to him,” Ali said. “There is only so much he can do, and it is up to the Somalis themselves and how much they want peace. The have-nots want him to succeed . . . but many of those in power do not.”

Like almost every other Somali here in Minnesota, Ali has relatives in Africa.

Political ties connect the state and the far-away nation too. Minnesota has been home to two former prime ministers of Somalia, several former cabinet members and many doctors, lawyers, religious leaders and professors. 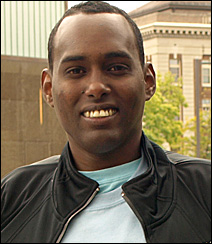 While this is the first Minnesota visit by a seated Somali head of state, leaders in the country have connected often with groups in Minnesota. That includes Ahmed who has sought advice and support from Minnesota over the years.

Now Ahmed will need all the support he can muster to make any headway toward holding his seat and stabilizing his lawless nation which often is called the world’s most failed state.

A former school teacher, Ahmed began standing up to warlords who had fought for control of Mogadishu for more than a decade, the BBC said in a profile. In 2003, a gang terrorizing Mogadishu abducted one of Ahmed’s 12-year-old pupils and demanded ransom. Ahmed pushed to establish an Islamic court which gathered powerful community support and secured the release of the pupil and other abductees.

That was a turning point, not only for Ahmed but for his local community too. They launched a campaign to combat the crime that was rampant in the city’s poor neighborhoods.

Eventually, Ahmed’s local court joined four others to form the Union of Islamic Courts (UIC). The movement had its radical and militant elements, but Ahmed “was always seen as the moderate face” of the Union, the BBC said.

With Ahmed as chairman, the UIC took control of large parts of south and central Somalia in early 2006 and enforced more order than Somalia had seen in years.

A week after Mogadishu came under UIC command that June, Ahmed organized a conference call with Somalis who had gathered in an office on Nicollet Avenue in Minneapolis. Minnesota Somalis present at the meeting told me he asked for their support and advice.

One piece of advice Ahmed got from Minnesota was that he urgently needed to convince the outside world that the UIC was neither radical nor connected with terrorists.

Tipping point
The Bush administration was having none of that claim. A different UIC leader was on the U.S. terrorist watch list as a suspected collaborator with al-Qaida. The U.S. State Department said at the time that the UIC was being hijacked by Al-Shabaab, the militant youth group working in league with al-Qaida.

To the alarm and disgust of many Minnesota Somalis, U.S. Special Forces helped Ethiopian troops march into Mogadishu and crush the UIC. That was the tipping point for many of the young Minnesotans who went to their homeland to fight.

Meanwhile, Ahmed fled the country in late 2006. In exile, he led a faction called the Alliance for the Re-liberation of Somalia. After Ethiopian troops withdrew, a UN-backed peace process made it possible for him to return to Somalia. 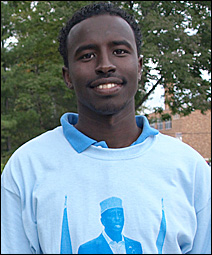 MinnPost photo by Sharon Schmickle
Mohamed Hussein of Burnsville was one of many volunteers for the Somali president’s visit.

The Somali parliament elected him president this year. In reality, he controls only a few districts of Mogadishu and some central parts of the country.

In his speech, Ahmed repeatedly condemned the young insurgents who emerged from the hard-line factions of the Islamic Courts movement. They are “using the name of Islam,” he said, but their real intent “is to surrender the country of Somalia to foreigners.” Somalia’s tradition is to look to elders as leaders, but the young men are “jumping ahead of that tradition and waging wars.”

Ahmed also made it clear that he welcomes help from the United States regardless of lingering hostility in Somalia over the Bush administration’s backing of Ethiopian boots on Somali soil.

On Sunday, Sen. Al Franken, D-Minn., took the Northrop stage along with Ahmed and other officials from both countries. He said that the United States has “important strategic interests” in a stable Somalia and that the Bush administration made a mistake by defining those interests too narrowly.

Now President Obama wants to look at Somalia in the political and economic context of the entire Horn of Africa, Franken said, and Clinton’s pledge of support was a first step toward a new approach in the region.