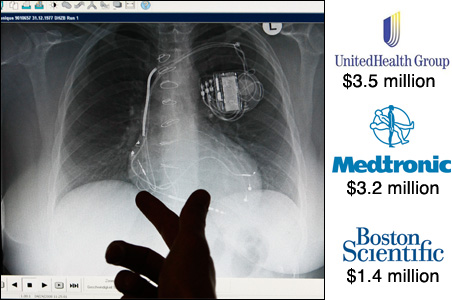 REUTERS/Fabrizio Bensch
Amounts spent on lobbying this year by some of Minnesota’s leading companies in the medical industry. The figures are based on federal lobbying disclosure documents through Sept. 30, 2009.

WASHINGTON, D.C. — As the high-stakes battle over health care escalates in Congress, Minnesota’s medical industry is pouring millions into lobbying with Medtronic and United Health Group alone spending more than $6.7 million this year to make their case to lawmakers.

“Medtronic is gangbusters for lobbying,” said Dave Levinthal, communications director at the Center for Responsive Politics.

The medical device manufacturer spent $3.2 million on lobbying this year and United Health paid out more than $3.5 million as Congress considers sweeping changes in the nation’s health-care system.

According to newly filed documents, Medronic  funneled $962,000 toward lobbying in just the third quarter of 2009, which runs from the beginning of July through the end of September. It spent about $2.3 million during the first two quarters.

“[In the first two quarters] that puts them at number one for companies that have lobbied on behalf of the medical device industry,” Levinthal said.

Medtronic — Minnesota’s 10th largest company by revenue and 18th largest employer – isn’t the only medical device maker spending money on lobbying. It is joined by St. Jude Medical of Minnesota and Boston Scientific, which is based in Massachusetts but employs more than 5,000 workers in Minnesota, making it the state’s 28th largest employer.

In the first six months of this year, St. Jude Medical spent $250,000 and Boston Scientific  $930,000 for lobbying, according to the Center for Responsive Politics.

Although United Health and Medtronic are on par with what they spent on lobbying during the first three quarters of 2008, the Center for Responsive Politics found that many of the big spenders in the health sector, including Blue Cross/Blue Shield and Pfizer, increased their lobbying efforts significantly in the second quarter of 2009 compared to the second quarter of 2008. (The center has not yet analyzed and compared third quarter reports.)

Lobbying over key provision
Of course, all this political action is not a coincidence. The medical device manufacturers are aggressively working against a provision in a key health care bill. Tucked into the Senate Finance Committee’s version of the health care legislation is a $40 billion fee on medical device makers that would be enacted over the next 10 years.

Minnesota Sens. Amy Klobuchar and Al Franken have been working to have that fee decreased or eliminated, saying it would be bad for economic development and health care innovation and for Minnesota, where the industry employs thousands of people.

Since they were elected to the Senate, Klobuchar and Franken have received tens of thousands of dollars in campaign contributions from the  medical device industry.

Klobuchar received $50,850 from the industry’s employees and special-interest political action committees (PACS), according to the Center for Responsive Politics. (These numbers do not include contributions reported in October filings.)

“This definitely puts her toward the upper end of members in terms of contributions received by people and PACS associated with the medical supply industry,” said Levinthal.

Levinthal noted that the number was “not insignificant given the short amount of time that he has been in the Senate.”

“It is actually well ahead of some members that have been in the House and Senate for a longer period of time,” Levinthal said.

Among Minnesota’s House delegation, the Republicans have been the industry’s favorites, with Michele Bachmann bringing in $52,650 in contributions and John Kline $42,550. GOP Rep. Erik Paulsen, who has been in Congress since January, has already raised $29,050 from the medical device industry’s employees and political action committees.

The numbers only go back to the 1990 election cycle.

As the Senate and House continue to combine and hammer out the different versions of their health care bills, it remains unclear what kind of bang the medical device industry will actually get for its sizable bucks.

Sen. Max Baucus, D-Mont., who chairs the Senate Finance Committee and authored the bill that contains the medical device fee, has received $254,016 from the industry since 1990 — placing him as the second largest benefactor in Congress behind Sen. Arlen Specter, D-Pa.

In an interview with reporters Monday, he said that the issue of the $40 billion fee was still being negotiated but that he thought the industry should pay its fair share.

Other lobbying efforts
Medical device manufacturers aren’t the only health-related organization in Minnesota with an interest in the legislation.

Health insurers, too, have been spending heavily on lobbying, with United Health Group spending $2.5 million in the first half of the year, according to the Center for Responsive Politics. (This figure does not include lobbying spending by United Health subsidiaries.) In the latest filing, the state’s second largest company by revenue reported an additional $1 million spent on lobbying in the third quarter of 2009.

Blue Cross/Blue Shield reported spending more than $4.4 million on lobbying. Blue Cross/Blue Shield of Minnesota, which is a subsidiary of the parent group, spent $69,000 during the first six months of the year and nearly doubled its quarterly lobbying efforts in the third quarter, reporting another $62,800 in spending.

The Health Services/HMOs industry as a whole has given Klobuchar $43,450 and Franken $47,600 since they took office, according to the Center for Responsive Politics. (These numbers don’t include October filings.)

Still, the state delegation’s numbers are tiny compared to the top recipients of contributions from the health services industry.

Notably, President Barack Obama tops the list both for medical device manufacturer contributions — raising $361,521  — and for health services/HMO industry contributions, receiving more than $1.4 million, according to the Center for Responsive Politics.

The Mayo Clinic of Rochester, Minn., is also making its presence felt in Washington this year. The Mayo Foundation employs about 37,000 people in Minnesota, making it the second largest employer in Minnesota behind the state itself.

In the first half of this year, the Mayo Clinic spent $510,000 on lobbying — more than it spent during all of 2008, according to the Center for Responsive Politics.

Since July, it has spent an additional $230,000, according to newly filed reports.

In addition to the fee on medical device manufacturers, other issues that matter to the health care industry in Minnesota are still in dispute, including the government-run public option and Medicare payment reform issues.