U.S. Secretary of Transportation Ray LaHood didn’t exactly step into a warm environment when he arrived in Minnesota today.

First off, of course, was the nasty weather, which caused LaHood to arrive about 30 minutes late at the Economic Club of Minnesota meeting, where he was the guest speaker,

“Sorry we’re late, we had a little transportation problem called the weather,” LaHood told the audience of 200, which included a lot of people in suits representing large law firms, banks, construction firms and a large dose of local politicians.

There was a little laughter.

Mostly, though, LaHood’s speech was greeted with a Minnesota chill. And during a question-and-answer session following the speech, there were at least a couple of questions that bordered on hostile regarding the Obama administration’s efforts to stimulate the economy.

LaHood, a Republican and a former Illinois congressman, seemed untroubled by the tone of the questions. Instead, he told program hosts that he would be more than happy to keep answering questions.

Right off, LaHood supported one of the administration’s programs that Minnesota Gov. Tim Pawlenty has belittled the most, the “cash for clunkers” program. 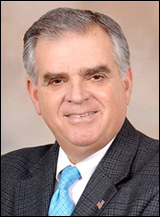 Calling the $3 billion program “a bright spot,” he said that the effort had put “$72 million into the pockets of 400 Minnesota auto dealers.

“A win, win, win,” he said of the program. “It drove up sales, it was a lifeline to the automotive industry, all dealers have been paid and it took gas guzzlers off the road.”

There was no applause.

Nor was there applause when the secretary said that passing a health care reform package was the No. 1 priority in creating an economic recovery.

“We have the best health care system in the world,” LaHood said, “but the problem is, all don’t have access to that care. … The stars are aligned. Health care reform is coming to America.”

He tied health care to transportation (a rebuilding and rethinking of the transportation system), and a “transformed energy policy” as the building blocks to brighter days.

Most in the audience seemed to sigh.

“Your salary is being paid with borrowed money,” the man said, angrily.

But LaHood was not shy about responding sharply.

“A tax cut won’t solve our problems,” the secretary said. “One of the things he [Obama] campaigned on was infrastructure. Every time you see an orange cone along the highway, that means somebody’s working. That means our infrastructure, which was ignored for 10 years, is being rebuilt. It [the federal stimulus money] is working.”

Another member of the audience, a woman, who clearly was a devotee of the previous administration, asked when the Obama administration was going to stop blaming President Bush for the country’s problems.  LaHood didn’t flinch.

Not everyone in this club that bills itself as nonpartisan was so cool to LaHood or the administration.

For example, Mary Hamann-Roland, the mayor of Apple Valley, sang the praises of the administration regarding the Cedar Corridor project. The effort will link Lakeville to the Mall of America via express buses, which will then connect with the light rail system.

The mayor invited LaHood to come back to Minnesota when the project is completed in 2011.

“We’ll try to get the president to come if I’m too busy,” said LaHood to much laughter.

He also got a warm response when he said that the Transportation Department will work with Congress to prohibit texting while driving.

And finally, the audience approved when LaHood urged all to block out the “noise” and “trash talk” generated by 24-7 media coverage and talk radio.

“Let’s be positive, optimistic,” he said. “That’s what Americans want.”

There was applause for that line.

Then he headed to St. Paul to tour the Union Depot with 4th District Rep. Betty McCollum. Already $15 million of federal money has been poured into designing and planning to turn the historic building into a modern facility where high speed trains, light rail, Amtrak and buses all will connect.

Such an idea, the secretary said during his speech, no longer is just a pipe dream. Rather, he said, the plans surrounding the Depot represent “the new outlook on transportation.”

The audience had not seemed convinced.