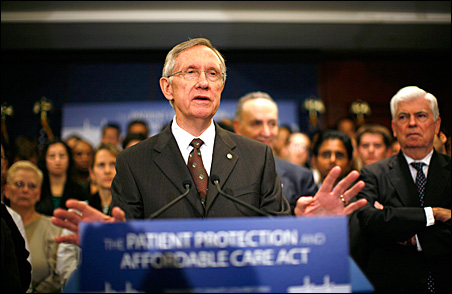 “I don’t know enough about [the Senate plan] to know whether I would vote for it or not, but clearly it moves in the right direction,” Rep. Collin Peterson said. “I think [in] our bill there’s too much ideology and I don’t think it’s necessarily workable.”

Peterson said that he prefers the Senate’s financing mechanisms to those included in the House-passed bill. While the House version would impose a 5.4 percent surtax on high-income people, the Senate taxes so-called Cadillac health-care plans and increases the Medicare payroll tax rate for workers with incomes of more than $250,000 a year.

The financing comes out of the health-care system, Peterson said. “I think that’s what has to happen. I don’t think we should be taxing something outside of health care.”

Peterson added that he favored the Senate bill’s creation of an Independent Medicare Advisory Board, which would work to cut the government programs growth over time. The House version would leave those decisions to Congress.

“I don’t have a lot of confidence that Congress will be able to do what needs to be done to make Medicare viable for the long term,” Peterson said.

Deficit reduction
Senate Democrats, when announcing the Congressional Budget Office’s cost estimates on their bill, were particularly ebullient about the measure’s deficit reduction figures. At $127 billion over 10 years, the Senate bill slashes the deficit more than any other legislation seriously being considered.

“I am not a betting woman, but I would put money on a table and say, ‘Let’s meet in 10 years and see whose right about whether or not this won’t add to the deficit,'” agreed Rep. Michele Bachmann. “I don’t think you’re going to find too many bookies in [Las] Vegas that are going to take that bet.”

Benefits in the Senate health-care bill largely begin in 2014, however most funding mechanisms kick in before that — an approach Rep. John Kline said made him suspicious of the scoring. The House bills benefits begin in 2013 and the Senate’s one-year delay in benefits allows for a lower 10-year cost estimate.

“I think the American people are going, ‘Oh, wait a minute, how are you going to provide all this coverage and it’s not going to cost a dime? It’s going to save the [deficit], well because we’re going to tax you for five years and were not going to start providing benefits until later,'” Kline said.

Bachmann, Kline and Rep. Erik Paulsen each voted against the health-care bill in the House. Each is expected to oppose final passage as well.

Abortion issue
While Minnesota Democrats were generally happier with the Senate version than the bill that passed the House, one key sticking point remains that may divide the caucus going forward: abortion.

The Senate plan continues a long-held restriction on the direct federal funding of abortions, but leaves open the possibility of funding the procedure under the public option while making no comment on what private plans would do. The House plan, which is much more restrictive, would ban abortion coverage from the proposed government-run public option and any plan offered to low- and middle-income people who use federal subsidies to help purchase health care through a competing private plan.

The House language was added through an amendment offered by moderate Michigan Democrat Bart Stupak and was key to securing the votes of pro-life Democrats like Rep. Jim Oberstar deemed necessary for passing the bill. Pro-choice Democrats, most of whom held their noses and voted for the House bill anyway, were glad to see that the amendment wasn’t included in the Senate bill.

“I think the Stupak version upsets a very delicate balance on abortion that we’ve had for a very long time,” said Rep. Keith Ellison.

It is unknown how the less restrictive language will play among those pro-life Democrats, without whose votes no health-care reform measure can pass.

On Thursday, a spokesperson for Oberstar declined to give the Iron Range Democrat’s reaction to the Senate’s more lenient language, saying he would wait to see what the Senate’s final language looked like.