By 7:30 Wednesday morning — just hours after he’d learned he’d lost his bid to become mayor of Minneapolis — there was a message for callers on his home phone. “I’ll be running for secretary of state in 2010,” the message said.

“Listen, I can win this race,” the 80-year-old Franson told me in a telephone conversation last night. “With the help of the American Legion newspaper, I can do it. I’ll start running some half-page ads in the paper next month.”

By his count, the run for secretary of state will be his 25th run for public office. He’s won only once, that coming in 1963, when he won a spot on the Minneapolis City Council. Two years later, he was defeated by a kid, Arne Carlson, in a race in which Franson still insists Carlson used unfair campaign tactics.

“The most vicious political animal we’ve ever had in this state,” Franson says of Carlson.

This latest loss, in the mayor’s race, left Franson filled with hope.

“Why shouldn’t I be optimistic,” he said. “I was fourth in first-choice votes; I was second in second choice and first on third choice. Imagine that! I got almost 10,000 votes. Every place I went today people were saying, ‘Franson, you did all right.’ “ 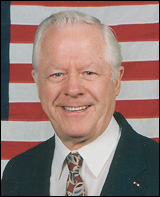 With just a little more media coverage, Franson thinks he might have done even better, though he was thrilled with a front page story the Minnesota Daily had about him on Monday.

“A really nice story, written by this vibrant redhead,” said the retired 1st sergeant. “I think she really liked me.”

Ah, ever the optimist.

Franson has lost all sorts of races from all sorts of places since 1965.  This will be his third run for secretary of state. He’s run a half dozen times for the U.S. Senate. He ran for lieutenant governor while he was serving in Vietnam in 1970.

“Got 119,000 votes running from the jungle,” he says. “I was sending out press releases from there.”

It was shortly after that, he said, that the state made it so lieutenant governors run on the ticket with the gubernatorial candidates, not independently.

The constant is that he’s always lost, with the exception of a 1998 run for commander of the Ballatine American Legion Post. He won that race, though it should be noted he was unopposed.

He’s spent thousands of dollars over the years in these futile pursuits.

“I’ll run until I’m a hundred, and if I live longer than that, I’ll run until I leave this world. I enjoy it. I’ve got a message, and my fax machine still is humming away. The key thing you learn in military leadership is that you never get discouraged. And I tell you, I think this last race went really well.”