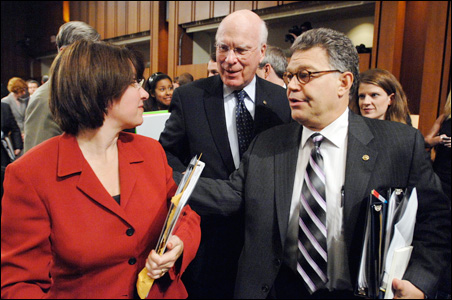 WASHINGTON, D.C. — Minnesota’s two Democratic senators signaled their approval Monday of the House-passed health-care reform legislation, but both indicated that they also saw room for improvement as the debate pivots to the Senate.

“It was historic,” said Minnesota’s senior Senator Amy Klobuchar of the bill’s passage late Saturday night. “But, my other reaction was that… it is now on our plate.”

Klobuchar said that she was “pleased” that the House legislation included a government insurance option that would have to negotiate rates with providers —  as opposed another option advocated by liberals in the House, which would have attached the public plan to Medicare rates.

“I think it [a public option attached to Medicare rates] would exacerbate the fact that Medicare [is going] in the red,” said Klobuchar.

Minnesota’s junior Sen. Al Franken, who has been a staunch advocate of a public option, also said that he supported the plan in the House health care bill.

“I hope we [the Senate] can do some version of it, which I think will increase competition for private health insurance companies [and] keep premiums low,” Franken said.

Movement on a bill in the Senate is currently pending a cost estimate from the Congressional Budget Office and —  more importantly —  the 60 votes that will be necessary to open and close the debate on the floor.

Sen. Joe Lieberman, I-Conn., has said he will not vote for a bill that contains a public option. Meanwhile, Sen. Roland Burris, D-Ill., stated recently that he would not vote for legislation that does not.

Abortion issue
To complicate matters further for Senate leadership, abortion has risen to the fore as yet another issue threatening to fracture the Democratic Party as it tries to come together to bring a bill to President Obama by the end of the year.

The narrow passage of the House bill hinged on a last-minute abortion provision that Speaker Nancy Pelosi, D-Calif., agreed to offer as an amendment to secure enough Democratic votes.

The measure bars the government-run insurance option and any private insurance plan on the proposed exchange that accepts people using government subsidies from offering abortion coverage.

Proponents of the measure say that it ensures the continuation of a 30-year-ban on federal dollars going to abortions. Opponents, however, argue that it would likely affect people using their own money on the exchange because insurance companies would be incentivized to remove coverage of the procedure from their plans, leading to an unprecedented restriction on access.

The amendment passed by a 240 to 194 vote with 64 Democratic votes, including Minnesota Reps. Collin Peterson and Jim Oberstar.

Some Senate Democrats, like Sen. Ben Nelson of Nebraska, have now said that they would like to see tougher abortion restrictions included in the Senate bill.

The version of the bill that passed out of the Senate Finance Committee bans abortion services from being required as part of a minimum benefits packed in the exchange. It also requires that insurance plans that cover abortions to separate public subsidies from private money

On Monday, Klobuchar said that she favored the Senate approach to the new House language.

“I prefer the Senate version because we basically were careful that we were not going to restrict that type of coverage — that an individual using their private money would be able to buy [a plan that includes abortion coverage],” said Klobuchar. “I think that was the right way to go. Hopefully we will be able to prevail.”

‘I am not happy’
Franken also said he was displeased by the House approach.

“I am not happy with it,” Franken said. “I mean it basically says that a woman cannot buy a policy on the exchange that covers abortion… even with [her] own money, and I think that that is not right and we will try to change it.”

As negotiations on the bill continue, both Klobuchar and Franken are continuing to push for Medicare payment reforms intended to benefit states like Minnesota that provide high-quality, low-cost care and a reduction of a proposed $40 billion fee on the medical device industry over the next 10 years.

The House bill reduced the fee to $20 billion over the next 10 years.

“We are still working on the numbers here in the Senate, but I think that we are headed in the right direction,” Klobuchar said.

Franken is also pushing measures, which he introduced earlier this year, that would streamline billing, require insurance companies to 90 percent of every premium dollar and actual health services, and end tax breaks for pharmaceutical marketing.

“I think this will save an enormous amount of money,” Franken said, adding that he was also in favor of House bill’s tax on the wealthy.

“Anyone who has been lucky enough to make that kind of money has benefited from living in America and can pay something back,” Franken said.

Senate Majority Leader Harry Reid, D-Nev., said on Monday that his goal was to bring the bill to the floor by the week of Nov. 16.

‘The hope is… that the bill would be out before Thanksgiving and then debating and voting before Christmas,” Klobuchar said.

Even if the legislation passes the Senate in December, however, lawmakers will still have to work out differences with the House bill, which could push final passage into next year.