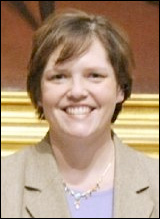 There was a big smile on House Speaker Margaret Anderson Kelliher’s face today and likely a big sense of relief in her political soul.

Keilliher had won the endorsement of the Minnesota Association of Professional Employees (MAPE) in her bid to become the DFL’s gubernatorial nominee. That’s a meaningful endorsement at any time, but it was particularly important for Kelliher because it is her first labor endorsement.

Labor has been sprinkling endorsements across the massive DFL field in recent weeks, diluting its own role as a king- – or queen- – maker at April’s state DFL convention. Still, it will be vital for serious candidates to show that they can muster union support if they are to win party endorsement.

MAPE’s endorsement came via the vote of 39 members of its executive board following two days of interviewing the 11 DFL candidates as well as Republican Pat Anderson (she was the only Republican who bothered seeking endorsement). Jim Monroe, the union’s exexcutive director, admitted that support for Keilliher was not universal.

“She was No. 1” is all Monroe would say of a straw poll among members that preceded the endorsement. He wouldn’t say who was No. 2, nor would he say how close the voting had been.

“MAPE members are critical thinkers,” Monroe said of the lack of universal support. “They always have questions.”

That said, he also noted that history shows that 76 percent of its 12,500 members support the endorsed candidate all the way to November.  More importantly, MAPE will train members to become delegates to the state convention. Monroe hopes there will be 100 delegates from the union – double the normal number — at the convention.

Some big union support remains in the bushes. Both Education Minnesota and Service Employees International Union are among those who haven’t bestowed blessings yet, and won’t for several weeks.

Scores of other unions also will be players before this is over.

Meantime, though, is labor losing some clout by going in so many directions?

“I’m not thrilled that their scattered,” he said. “I understand [the rush to endorsement] if the goal is to get your name attached to the ground floor of someone you think could be governor. But if the goal is to elect the next governor of Minnesota, I’d like to see us a little more united.”

Morillo, whose membership will not endorse until sometime next year, does think this scattering is giving special power to members of his union and Education Minnesota. If those two large, distinct unions endorse the same candidate, it likely would create a huge wave of momentum.

Leaders of those unions do talk often, though not formally.

But back to the question: Does the dispersal of endorsements dilute union power inside the DFL?

“There is that potential,” said MAPE’s Monroe, “but labor is really is like a big, extended family. Ultimately, we’ll be united.”

Just when that unity will take place is not clear. AFSCME, for example, said it will stick with Dayton through the primary, even if another candidate is endorsed. Keilliher says she’ll abide by endorsement but, if there is no endorsement, made it clear she’ll advance to a primary, and MAPE said it will stand by her “through the process.”

Most, though, still expect DFL delegates to end up endorsing, a process that requires a candidate to get 60 percent convention support.

No matter how it’s sliced or diced, this was a huge day for Kelliher. She’s expected to have strong support from super-delegates – her campaign is calling those elected officials “auto delegates’’ – and has received the support of  womenwinning, a  strong political action committee that will have an impact among DFL feminists.

“We’re a people-powered campaign,” Keilliher said. “Our office has been humming — they [MAPE activists] will be added to it.”