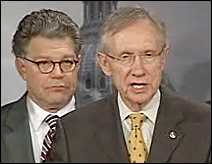 WASHINGTON, D.C. — A health care bill before the Senate will cost $849 billion over the next 10 years and extend coverage to 98 percent of legal residents, according to a Congressional Budget Office estimate released Wednesday that Minnesota Sens. Amy Klobuchar and Al Franken praised as “very positive” and “promising.”

The cost estimate comes under a target of $900 billion outlined by President Obama earlier this year in a speech to a joint session of Congress, an important point for moderate Democrats concerned with the legislation’s effect on the deficit. The bill would cut the deficit by $127 billion over the next 10 years — more than any other legislation under serious consideration — and by $650 billion during the decade after that. The CBO also estimated that the bill would slash health care costs over time by $1 trillion.

“There is still a lot of work to be done, there is no doubt about it, but it is a good beginning,” Klobuchar told reporters after a Democratic caucus meeting on the legislation and the CBO’s report.

Key provisions
The mammoth bill, which Klobuchar jokingly described as “shorter than Sarah Palin’s book,” is set to be introduced this evening. Reading off a notepad, Klobuchar ticked off a long list of items included in the bill:

• A government-run public insurance option with an opt-out clause as part of a national health care insurance exchange;

• A reduced tax on medical devices of $20 billion over 10 years (the original Senate legislation had that at $38 billion); and

Another change requires insurance plans competing in the proposed exchange to spend 85 percent of premiums on actual health services, as opposed to administrative costs and advertising. Individual plans not in the exchange would have to spend 75 percent. The average rate in Minnesota is 91 percent, one of the highest rates in the nation. The provision borrows heavily from a bill Franken introduced shortly after joining the Senate, though Franken’s legislation would have set the bar at 90 percent.

A key provision omitted was the so-called Stupak Amendment, which stipulates that any government-run insurance option and any private insurance plan on the proposed exchange that accepts people using government subsidies would be barred from offering abortion coverage. That amendment was central to passage of the House health care bill, which brought enough pro-life Democrats like Jim Oberstar on board to secure the measure’s five-vote victory.

While both Minnesota senators said they need to read the final bill before voting on it, they said they were pleased with the results so far.

Weekend debate
Democratic leaders plan to offer a procedural motion that would allow the Senate to begin debating the bill as early as Saturday.

Sen. Ben Nelson of Nebraska said Democrats would likely succeed in finding 60 votes on the cloture motion to begin debate. Nelson is one of three centrist Democrats undecided on the health care plan with whom Senate Majority Leader Harry Reid met before unveiling the plan. His support is considered key to its passage.

Still unknown is whether a second cloture vote to end debate can garner the necessary 60 votes to avoid a Republican-led filibuster. Estimates inside the Democratic caucus put the number of yes votes on final passage at about 55 — enough to pass the bill but not enough to bring it to that final vote.

President Obama’s statement on Senate health care bill
Today we passed another critical milestone in the health reform effort with the release of the Patient Protection and Affordable Care Act. I was particularly pleased to see that the Congressional Budget Office has estimated that the bill will reduce the deficit by $127 billion over the next ten years and as much as $650 billion in the decade following, saving hundreds of billions while extending coverage to 31 million more Americans.

From day one, our goal has been to enact legislation that offers stability and security to those who have insurance and affordable coverage to those who don’t, and that lowers costs for families, businesses and governments across the country. Majority Leader Reid, Chairmen Baucus and Dodd, and countless Senators have worked tirelessly to craft legislation that meets those principles.

Just yesterday, a bipartisan group of more than 20 leading health economists released a letter urging passage of meaningful reform and praising four key provisions that are in the Senate legislation: a fee on insurance companies offering high-premium plans, the establishment of an independent Medicare commission, reforms to the health care delivery system, and overall deficit neutrality. The economists said that these provisions ‘will reduce long-term deficits, improve the quality of care, and put the nation on a firm fiscal footing.’ Those are precisely the goals we should be seeking to attain.

The challenges facing our health care system aren’t new — but if we fail to act they’ll surely get even worse, meaning higher premiums, skyrocketing costs, and deeper instability for those with coverage. Today, thanks to the Senate’s hard work, we’re closer than ever to enacting solutions to these problems. I look forward to working with the Senate and House to get a finished bill to my desk as soon as possible.

By Derek Wallbank and Cynthia Dizikes