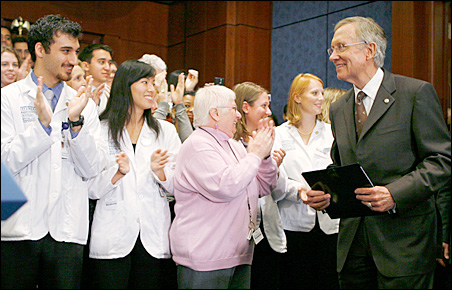 REUTERS/Kevin Lamarque
Senate Majority Leader Harry Reid greets medical students as he arrives for a news conference on health-care reform legislation at the Capitol on Thursday.

While both bills guarantee access to health insurance regardless of pre-existing conditions, neither one will do much to improve the affordability of health coverage for moderate to middle-income Americans in the individual market, according to wonks and critics across the political spectrum.

In fact, some Americans eligible for proposed federal subsidies may fall into the category of “under-insured” because they would spend more than 10 percent of their income — a widely used affordability standard — for premiums and out-of-pocket costs.

So, despite all the historic efforts to clean up the individual health-insurance market, consumers could continue to be priced out of the market — and they could be penalized for not having insurance, potentially adding insult to injury.

“All that guaranteed issue is, by definition — and people forget this — is you are given a price for the insurance policy,” said Stephen Parente, a University of Minnesota health economist who helped develop health policy for Republican Sen. John McCain’s presidential campaign. “It doesn’t change the fact that you might not be able to afford an insurance policy, at which point you are effectively denied.”

Liberal analysts also worry about the question of affordability for moderate to middle-income people.

“Some people will be helped but there are going to be some people that fall just out of the benchmarks,” said policy analyst Lynn Blewett, director of the State Health Access Data Assistance Center at the U of M.

Economists, policy analysts and congressional aides are still sorting through the details of the new 2,074-page Senate bill, but bills from the Senate Finance Committee and Health, Education, Labor and Pensions (HELP) Committee were similar in laying out how subsidies or credits would work. Both bills call for subsidies for folks earning up to 400 percent of Federal Poverty Guidelines, although they vary on percentages of cost-sharing. 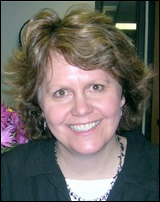 “Today we’re carefully considering the provisions outlined in the bill that was introduced last night [Wednesday],” said Jess McIntosh, a spokeswoman for Sen. Al Franken, D-Minn., who is a member of the HELP committee. “We’re pleased that the merged bill has some marked improvements compared to the Senate Finance bill, including coverage for an additional 2 million people and lower premiums for families above 150 percent of the poverty level. Unfortunately, the bill has higher premiums than the Senate Finance bill for families between 133-150 percent of the poverty level.”

Subsidies and caps
A Congressional Budget Office’s analysis of subsidies [PDF] in the House’s Affordable Health Care for America Act breaks down the share of premiums and out-of-pocket costs per income level. Higher-income individuals would pay no more than $5,000 in out-of-pocket costs (in addition to premiums) while families would pay no more than $10,000.

At the low end, a family of four with annual household income of $30,000 would on average spend no more than 4 percent of income on the insurance premium and out-of-pocket costs, and 97 percent of the premium would be subsidized. But once household income for a family of four reaches $54,000, the family’s premium and cost-sharing would be 11 percent of income — exceeding the point where many analysts consider a moderate-income family to be under-insured. The total share climbs to as much as 18 percent for families of four making $78,000 to $90,100. (See chart below.) 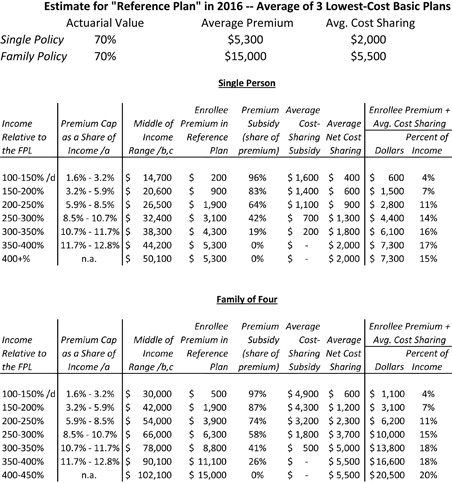 “I think they probably started with that 10 percent and this is where they got to,” Blewett said. “They’re giving a greater subsidy to lower-income populations and less of a subsidy to the higher-income. But it’s some subsidy, and my guess would be that was part of meeting some budget target as they’re trying to figure out the budget for the whole health reform” effort.

The subsidies and caps offered through insurance exchanges, where individuals and small businesses would shop for insurance, are better than nothing, analysts say.

“The tiers that individuals fall into with regard to their income will give them support that they’re not getting right now,” said U political scientist Larry Jacobs, who has studied health policy for 25 years. “For middle-income folks there’s not as much help, but as you go down the income ladder it becomes quite substantial. This may be the most redistributive program passed in decades.”

Although the sliding subsidy scale may not make individual health insurance as affordable as policy-makers hoped, Jacobs said, “it’s one of the main tradeoffs” in pushing through comprehensive reform to cover 30 million-plus uninsured citizens and keeping 10-year costs below $900 billion.

Julie Brunner, executive director of the Minnesota Council of Health Plans, said she is worried about the affordability issue.

“One of the biggest concerns I have right now is there’s been this expectation that has been created in people’s minds that they’re going to be able to get coverage and that it’s going to be affordable,” said Brunner, whose council represents insurers. “People are legitimately worried about accessing health care and keeping health care and that is a legitimate concern. … There isn’t a person I know who doesn’t have that worry, and my concern is that somehow or another people’s expectations may not be met through the legislation. We don’t know the answer right now.”

‘Someone has to lose’
Aaron Dickinson, a 28-year-old agent for Edina Realty, knows he won’t be eligible for a federal subsidy because he earns more than 400 percent of FPG. Still, he likes the idea that he won’t be denied coverage and that he can shop for policies in an exchange. After he was denied coverage because of a pre-existing condition, he bought a policy through the Minnesota Comprehensive Health Association, a high-risk pool funded by insurers. He pays $237 a month and has a deductible he considers manageable.

Although his insurance premiums could go up under federal health-care reform, he seems to take it in stride.

“The trick with any of these programs is that someone has to lose,” said Dickinson, who writes the Twin Cities Real Estate Blog. “At the end of the day, everybody can’t be on the winning side. If we’re going to give coverage to millions more and guarantee coverage, it comes at a cost and it probably means higher premiums for some and lower premiums for others.”

The vast majority of Realtors are independent contractors, and up to 30 percent are uninsured nationwide, said Christopher Galler, chief operating officer for the Minnesota Association of Realtors (MAR). While MAR’s 25-year-old policy is available to its 20,000 member agents, enrollment has fallen to 800 because the escalating costs have become prohibitive as members have aged, he said. In fact, the median age of Realtors nationwide is 54.

While the House bill will let insurers charge older people twice as much as someone Dickinson’s age, the Senate Finance Committee’s bill would allow insurers to charge four times as much. Minnesota caps the ratio at 3-to-1.

Again, Dickinson is not overly concerned that he could pay more for health care if the 2-to-1 ratio prevails and more costs are shifted to his age group. He realizes it could squeeze the budgets of clients who are first-time home buyers.

He also knows that employer-sponsored health coverage, which is typically more generous than individual insurance, is no sure thing. Before he became a Realtor, he worked in information technology. After the Sept. 11, 2001, terrorist attacks, he was laid off four times in two years.

Freelance Japanese-English translator Karen Sandness, featured in a MinnPost story on problems in the individual market, thinks some of the reform measures will help overall. Right now, she pays $250 a month for a policy with a $5,000 deductible, a lifetime benefit cap and virtually no first-dollar preventive care. Her income varies so it’s hard to predict whether or not she would be eligible for a subsidy year-in, year-out.

“I like the fact that they’re not going to allow rescissions or discrimination based on pre-existing conditions,” she said. “I don’t like the idea of compulsory insurance if most of us won’t be eligible for the public option. That seems like corporate welfare and guaranteeing a customer base for the insurance companies.”

Individual mandates
Most reform legislation calls for an individual mandate for American citizens to carry health insurance and imposes penalties on those who don’t get insurance. For example, the House bill carries a penalty of 2.5 percent of adjusted gross income.

“I’m a little annoyed they put out a 2,000-page bill that could contain all kinds of minefields,” said Sandness. It would have been simpler, she said, to pass legislation banning insurers from denying coverage for pre-existing conditions. “Why not pass this as separate legislation instead of burying it in a 2,000-page bill? Nobody really knows the whole bill, and judging from the Massachusetts experience (which has an individual mandate) the income levels could be unrealistic.”

Blewett, the health policy analyst, said consumers in the individual market will benefit from a transparent insurance exchange that not only allows comparison-shopping but also the assurance that all the plans meet federal requirements for essential benefits and preventive care. As it is now, loopholes abound in the individual insurance market. Placing individuals and small-business workers who are currently uninsured into one pool also spreads the risk and could lower costs, she said.

While the expansion of the federal/state Medicaid program is expected to cover more of the poor and lower-income population, she said, affordability will remain an issue for the moderate and middle-income people in the individual market.

“I think they decided they couldn’t do everything at once, so they’re going to deal with access first and deal with cost later, which is what Massachusetts did,” she said. “So, that’s a political strategy, and I’m sure they couldn’t get the providers on board if they were doing the payment reform or system reform.”

Casey Selix, a news editor and staff writer for MinnPost.com, can be reached at cselix[at]minnpost.com. Follow her on Twitter.

Consumer Reports explains how the individual mandate would work and offers profiles of how individuals with varying incomes would be affected.

Kaiser Family Foundation has a toolkit to build side-by-side comparisons of health-care legislation.