This afternoon, when it breaks ground for its new performance venue on Hennepin Avenue in downtown Minneapolis, the newly named Minnesota Shubert Center can look back at a rich history starting in 1910, when it opened as a live theater at its original location on 7th Street.

The nonprofit group ArtSpace is rebuilding the historic theater, which was moved to its current location, 528 Hennepin Avenue, in 1999. (Groundbreaking ceremonies will be held from 12:30 to 1:15 p.m. at the center; a reception and performance will follow.)

During its early years, the Shubert was synonymous with its long-time manager, A.G. “Buzz” Bainbridge, one of this city’s most colorful and controversial characters. Bainbridge ran the theater through the 1920s and up until the early 1930s, when he abandoned the world of show business for the world of politics.

The ebullient Buzz began his theatrical career while he was still in his teens as a bill poster and advance agent for a traveling circus. Later, he organized a troupe of players that bore his name, and married one of its members, Marie Gale.

Bainbridge would become Minneapolis’ leading impresario, booking theatrical acts, including those of his own troupe, in the 1,500-seat Shubert.

A dramatic entrance into politics
In January 1933, with no previous involvement in municipal politics, Buzz declared that he was a candidate for mayor of Minneapolis. It was Friday the 13th and the local showman made his announcement standing under a ladder, holding an open umbrella with his fingers crossed. Most observers assumed that the announcement was merely a publicity stunt, but Bainbridge proved them wrong. 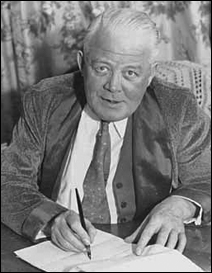 Soon he was taking on a new, more serious image as he crisscrossed the city in a series of campaign appearances, calling for cuts in city spending, job projects for the unemployed and an advertising campaign to attract tourists and businesses to Minneapolis.

Buzz’s sunny personality during the Depression-weary winter of 1933 struck a responsive note with the public. In something of a political upset, Bainbridge ousted the city’s incumbent mayor, William Anderson, in that year’s municipal election.

In an editorial lauding the election of the theatrical impresario, the Minneapolis Journal noted that “Minneapolis likes Buzz Bainbridge — likes him as a resourceful showman, a service man, a fraternal worker and as an unselfish citizen. … Minneapolis has now demonstrated that she has a deep faith in him, as well, by entrusting to him her chief magistracy.”

The paper acknowledged that the newly elected mayor “has had no experience in municipal office … and no more than a general interest in municipal affairs. But he has faith in himself and an ardent desire and a firm determination to make good.”

Free opera for residents
In his inaugural address, the newly elected mayor promised to do good by providing free opera for Minneapolis residents at the city’s public auditorium. But Bainbridge soon found that other, more deadly serious issues confronted him at City Hall.

In 1934, a bitter and violent labor controversy threatened to paralyze the city. Bainbridge stood by while his police chief, a bitter foe of organized labor, moved to break the strike.

In what came to be known as Bloody Friday, the police opened fire on the unarmed strikers, killing two of them.

Soon labor leaders and their followers were calling for the ouster of Bainbridge, who oversaw the operation of the Police Department in his role as mayor.

In 1935, when he sought election to a second two-year term, Bainbridge was soundly defeated. By now, his health was deteriorating, and he would die a year later, in 1936, at the age of 50.

A showman ‘first and last’
In eulogizing the former mayor, the Minneapolis Tribune noted that “first and last, Buzz Bainbridge was a showman whose devotion to the theater dominated his whole life. …

“In politics, perhaps, Mr. Bainbridge was not happily cast and it may be that Minneapolis will not long remember him as mayor. But who can forget the smiling happy ‘Buzz’ who stood outside his little office in the Shubert and greeted the throngs passing into that world of make-believe to which he gave such singular devotion.”

In spirit, at least, Buzz may be back at the theater, greeting the throngs who will be attending the groundbreaking for the new Minnesota Shubert Center.