In a cautious and decidedly mixed outlook for 2010, Federal Reserve Bank of Minneapolis regional economist Toby Madden today predicted the region is on a “gradual mend.”

Saying the economy “hit bottom” in the third quarter of 2009, he declared the recession over at a morning news conference. An optimistic outlook for agriculture and a modest improvement in consumer spending are expected to aid the region’s recovery.

But the Fed’s annual forecast also delivered somber news on the employment front, predicting that Minnesota could lose an additional 11,400 jobs next year with the state’s unemployment rate rising to 8 percent. While projected to still be better than the national unemployment rate as a whole, that would be an increase from the current 7.4 percent. 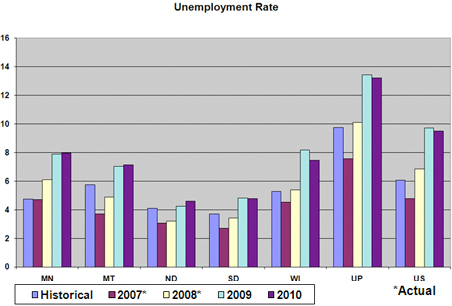 Courtesy of the Federal Reserve Bank of Minneapolis

Since December 2007, the start of the recession, through November 2009, the Minnesota economy has lost 122,200 jobs. Recent job gains in October and November (month-to-month gains of 5,000 and 2,000 jobs, respectively, over 2008) were better than predicted, so the Fed will re-run its model in early February with complete data for the fourth quarter to see whether the model’s predictions change.

Asked what the forecast means for individuals throughout the region, Madden acknowledged the glum employment outlook but pointed to out that personal income is rising, the economy overall “is not getting any worse” and the survey of business leaders in the region projects relatively stable prices for the coming year.

But if the lack of continued bad news was the biggest piece of good news, there is still plenty to be concerned about in the Fed projection.

If psychology is as important as employment and spending in pulling the economy out of a recession, the region has a way to go. Nearly 60 percent of regional business leaders remain pessimistic about 2010, with Minnesota business leaders the most pessimistic. While that’s an improvement from last year (when 70 percent were pessimistic) it still illustrates a deep well of caution in an otherwise typically optimistic group.

“It’s hard to be optimistic when you’ve had a bad year,” Madden explained. More than 50 percent of business leaders surveyed also cited continued tight credit conditions as an obstacle to growth.

The report also looked back at 2009 performance, showing that manufacturing activity began picking up during the second half, after declining for 12 consecutive months. New orders and production are expected to grow in 2010, but employment and capital investment will remain flat. 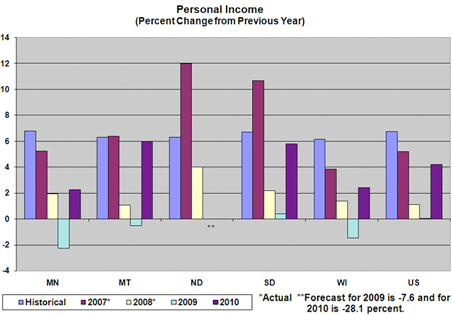 Courtesy of the Federal Reserve Bank of Minneapolis

Consumer spending, meanwhile, has showed some signs of recovery, growing by 2.9 percent in the third quarter, helping to boost overall growth. And monthly retail sales also posted increases in October and November.

The Ninth District includes Minnesota, Montana, North and South Dakota, northwestern Wisconsin and the Upper Peninsula of Michigan. The jobs outlook is more positive for the agriculture and resource dependent economies of Montana and the Dakotas. The UP in particular has also been hurt by its ties to the automotive industry in lower Michigan, Madden said.

“Recovery in the district’s eastern states may stall on job increases until 2011,” the report concludes.

The annual Ninth District Economic Forecasts includes information from the Minneapolis Fed’s statistical forecasting models, results from the fedgazette‘s annual business conditions outlook poll of 376 district business leaders, a survey of 532 district manufacturers conducted by the Minneapolis Fed and the Minnesota Department of Employment and Economic Development, and a poll of 544 Chamber of Commerce members.